As Dessa mentioned in the previous post, today is the last day to pre-order your copy of Made Like Us and receive the awesome bonus Paper Tiger sunglasses.  Having had the chance to see these songs transform over the last year from tiny demo sketches to full blown compositions, I have to say that you most definitely need this album in your life.  Paper really knocked it out of the park with this one.  Pick it up HERE.  As always, we can’t thank you enough for the support.  End of plug…

Last weekend our dear friend Joe Mabbott got married!  Mabbs has been recording and mixing all of the Doomtree albums for years now, and besides always making us sound like true professionals, he is also pretty much the best guy ever.  On Wednesday a bunch of us met up at the Yacht Club to do it real big for his bachelor party.  This is the same place I ended up on my bachelor party a few years back, and I’m starting to think that this may be the only place one should ever go for one of these types of occasions.  So much fun.  Here’s a picture of Joe surrounded by big time rap producers (Paper, Benzilla, Medium Zach) right after we got him drunk enough to agree to give us all free studio time for life.  Bonus! 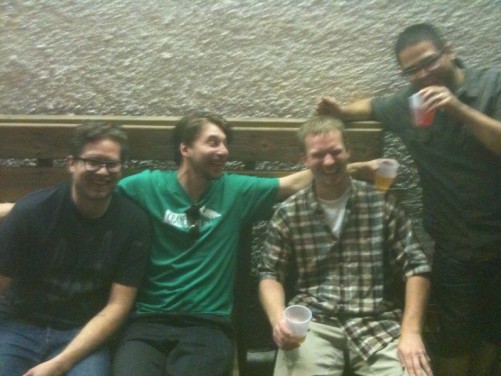 And as a special early Bonus Jam, I’ve also included the best song from the last Rick Ross album, entitled “Yacht Club,” as an ode to the wonderful establishment that housed these two legendary bachelor parties.  A true rite of passage.  Congrats to Joe and Nell!

In other news I just started working on a new project with the god Crescent Moon.  It’s still in the super early stages and neither of us know exactly what will come of it, but I can’t begin to tell you how excited I am.  If you grew up in the Twin Cities then you already know what a true legend this man is.  He’s consistently put out incredible records over the last decade with Oddjobs, Kill the Vultures, Roma Di Luna, and Big Trouble (he’s also guested on Ipecac Neat, Lights Out Paris, and the self-titled Doomtree album).  Easily one of my favorite rappers out there for years now, so working on this record is a true honor.  We started demoing a couple of the first joints yesterday over at Stef’s place and I grabbed this picture.  Legend Recognize Legend indeed. 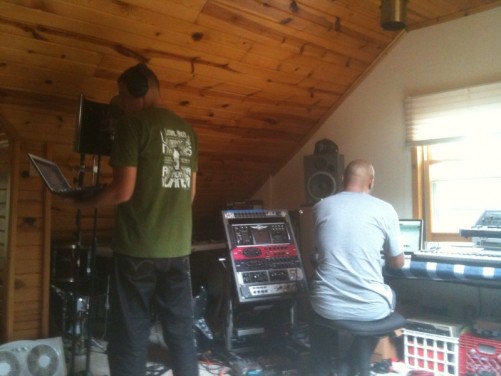 I’m spending the rest of the week practicing for this epic Paper Tiger release show on Saturday.  We’re gonna be playing the beats out live for his set and then the whole crew will be performing some classics, so make sure to come down if you’re in the area.  Sauce (Lyndale and Lake) – Saturday July 24th – 10:00pm.  The venue only holds a couple hundred people, so get there early if you can.  It will be most glorious!

I’ll leave you with a few Bonus Jams off two of the stongest rap albums to come out this year.  Constant rotation in the Camry, might even have to do a review of these two in next week’s post.  Rick Ross is killing them out there right now!  See you next Tuesday for sure.