Hey everybody!  I’ve got a ton of exciting announcements today, so let’s just get right into it.  I’m super pumped to inform you that the Bad Time Zoo instrumentals are now available on iTunes (if you’re into that sort of thing).  Just click the screenshot below to check them all out.  Also available via Amazon HERE if that’s more of your thing.  Lava Bangerz 4 Life!

Rhymesayers also just announced the lineup for the 4th annual Soundset festival taking place in Shakopee, MN on May 29th, and for the first time ever the entire Doomtree crew will be performing together on the mainstage!  We are super amped up about this, especially since we’ll be sharing the same stage as Big Boi and De La Soul.  Check out the entire lineup below, and click on the image for the most up to date info on the whole event.  Tickets go on sale this Friday.  And as always, this is guaranteed to be a ridiculously good time. 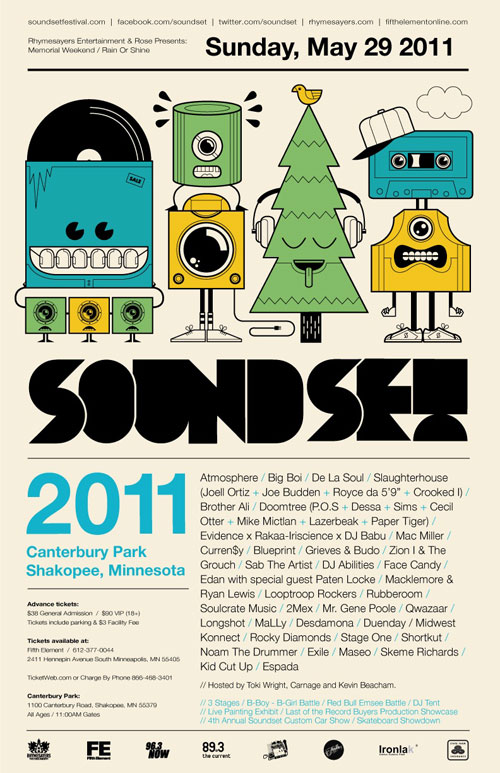 In other big time news, Dessa was recently the special featured artist in an hour long TPT MN Original broadcast that aired throughout our entire home state over the weekend.  The episode captures a recent concert that Dessa and her band played at the Cedar Cultural Center, and there is a ton of awesome brand new material performed throughout (as well as new takes on a lot of the classics), plus some interviews and behind the scenes segments sprinkled in for good measure.  TPT just made the entire hour long episode available for online streaming, so if you’ve got the time I would definitely recommend checking this out.  Below is a clip of one of the new songs from the concert to give you an idea of what you’re dealing with.  Click HERE to watch the whole thing at the MN Original site.

Bam!  Gonna get into a few Bonus Jams before calling it quits.  This first track is by Toro Y Moi off his latest Underneath The Pine album.  Perfect music to welcome in springtime.  I haven’t been able to sit with this thing long enough to tell if it’s as good as everybody is saying, but there are some definite heaters on here, no doubt about it.

The next track is from a German producer by the name of Siriusmo, off his new album Mosaik.  A lot of this record ventures way too far into crazy house/techno territory for my tastes, but there is also a good amount of really great keyboardy pop tracks sprinkled throughout that more than make up for it.  Another springtime jam for sure.

And I’ll end the post with a special Bonus Mixtape Jam.  I think I’ve talked about Big K.R.I.T on here before a time or two before.  He’s an extremely promising rapper/producer from Mississippi that just signed to the majors recently.  His “K.R.I.T Wuz Here” mixtape was one of my favorites of 2010.  Definitely pulling for the young gunner.  Yesterday he released a brand new free tape called Return Of 4Eva.  I haven’t gotten a chance to hear much of it yet, but judging from his past track record this should be outstanding.  Plus the artwork is already incredible in that throwback Outkast sort of vibe.  Click the image below to download the whole album, or check out the video underneath it to get a better feel for the project.

That about does it for this week.  We have officially started work on the next crew record, and I’m headed over to Stef’s studio to make some new heaters with him and Cecil.  So it begins.  Can’t wait to make some headway on this thing and bang out a bunch of new tracks.  Will definitely keep you posted as more progress is made.  I hope you have an outstanding week, and I’ll see you next Tuesday for sure.