Hello and welcome back to the first Tuesdays With Lazerbeak post of 2015. I hope you’ve all had a relaxing holiday break and an awesome start to the new year. HERE WE GO: It’s officially All Hands season, as the new Doomtree crew album drops in just THREE WEEKS! So crazy. To get you even more amped, here is a super hands-on packaging video to show you just exactly what you’re getting when you pre-order a physical copy of the record from the Doomtree Webstore. Shouts to Ander Other for crushing yet another excellent vizual. Check out the Hands On All Hands video below!

Yesterday we all got together and began signing the posters that will come with every single standard and deluxe pre-order copy of All Hands. Here’s a pic that Dess took of Sims, Mike, and me hard at work. Shouts to all my southpaws worldwide. Cop your pre-order HERE to get one of these bad boys for yourself (ahem, the posters that is). 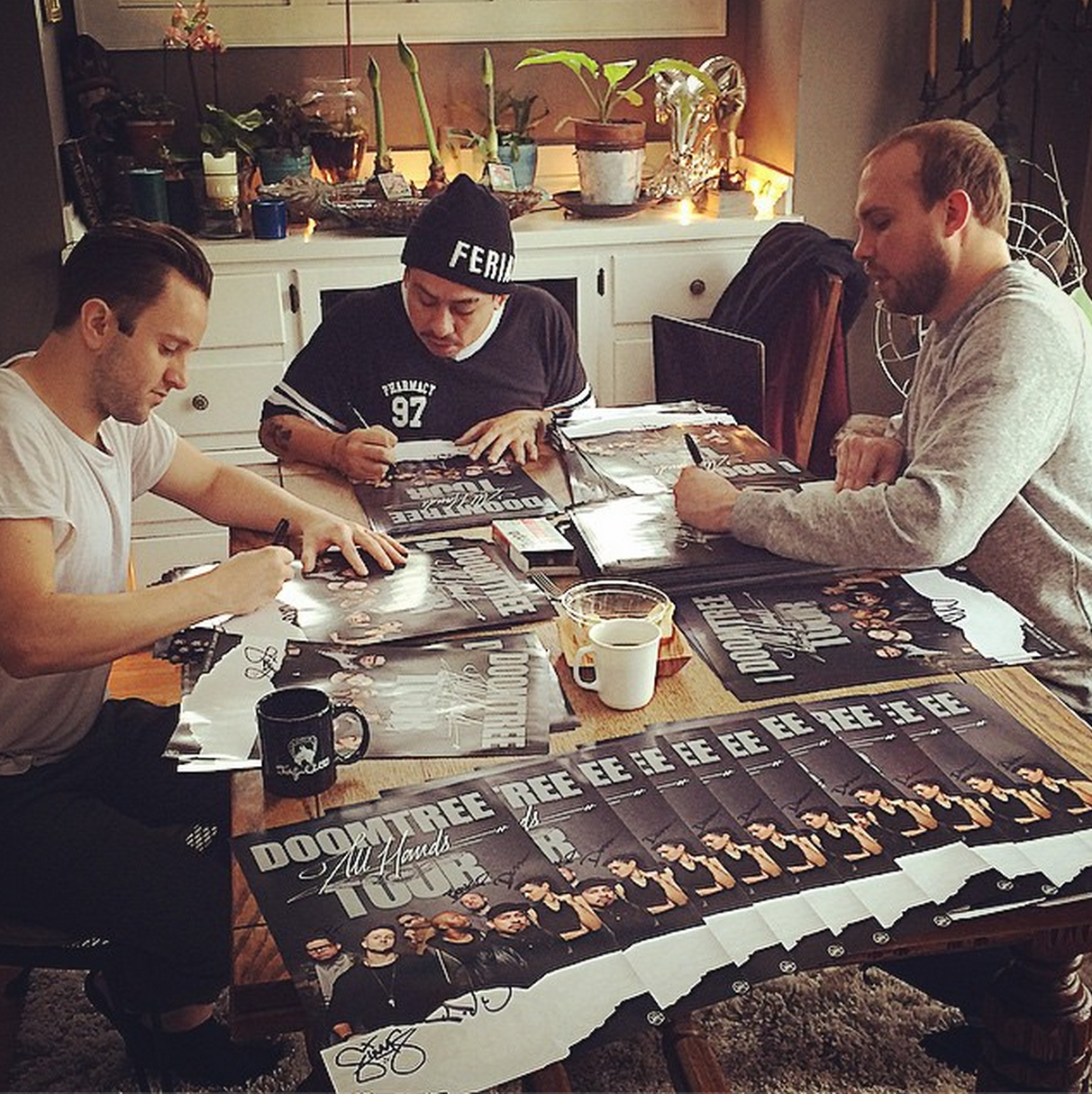 One extremely lucky pre-orderer is going to be receiving this poster, which includes a forged Gordon Ramsay signature courtesy of P.O.S. Not really sure what happened there, but I think after about six hours of doing this we all might have officially lost our minds. 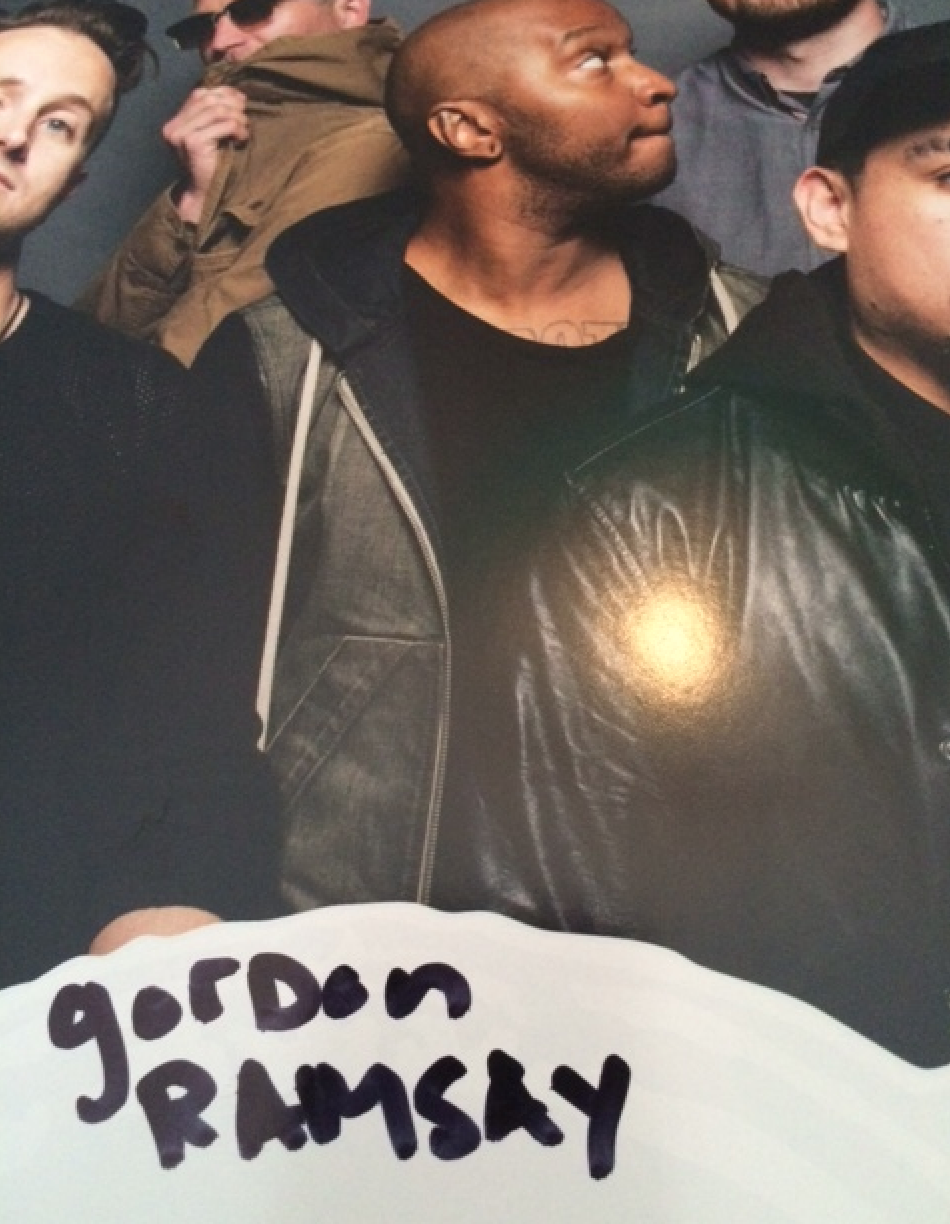 Here’s a quick shot of the CD spine. I’m so pumped to announce that we’ve finally cleared the 50th Release benchmark as a label!!! Gotta say, it feels incredibly fitting that it coincides with this crew release too. TTBT 4 LYFE. 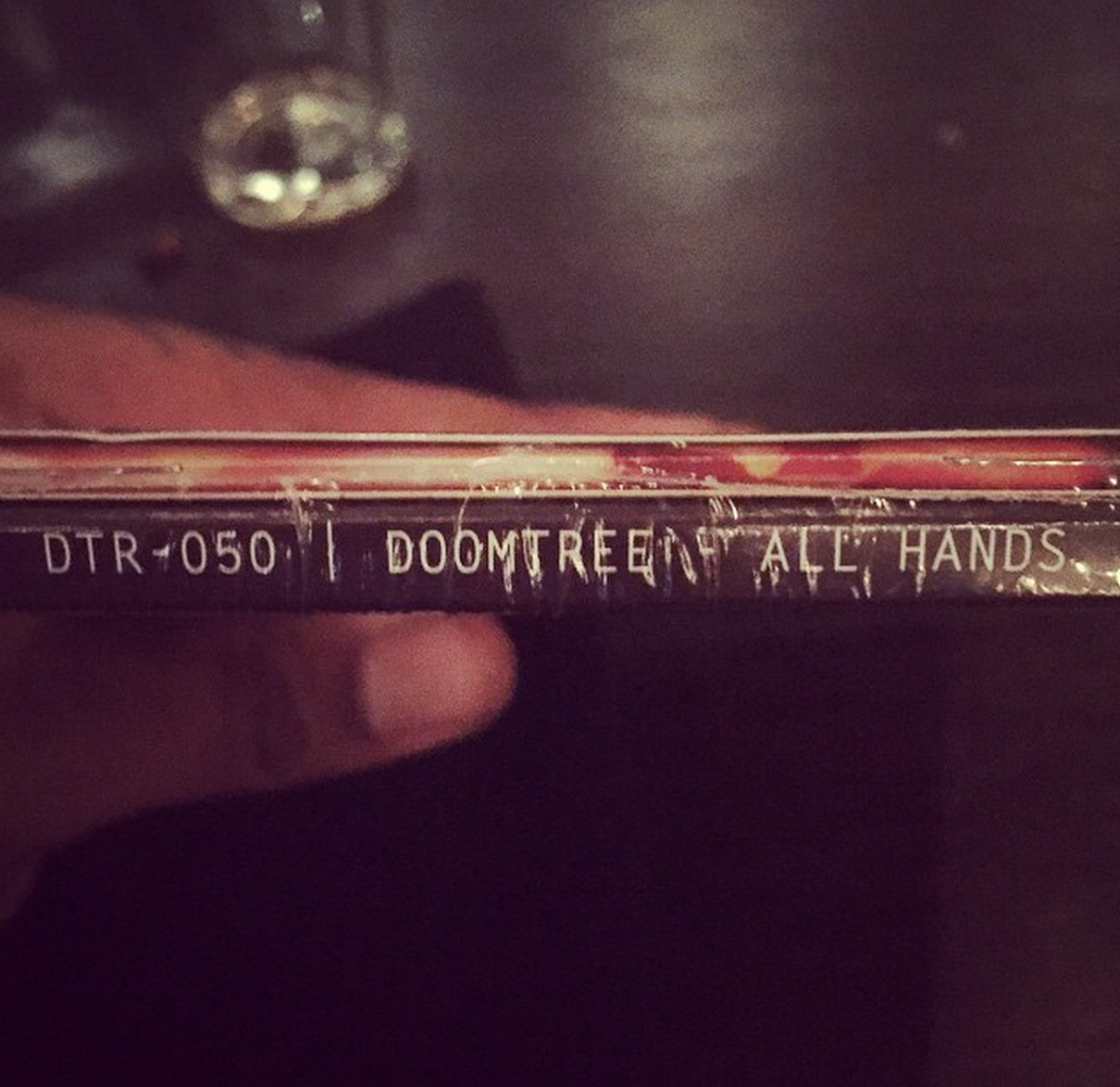 So now for the real task at hand: THE PRE-ORDER. If you’ve been reading this site for awhile, you probably already know where I’m going with this, but here I go again anyways. Here’s the gist of it: The sole reason we’ve been able to release 50 albums over the past decade is because of this pre-order system. Not only does the money generated from these campaigns go towards the cost of producing the current album (manufacturing, publicity, music videos, radio, etc), but it also gives us a cushion to fund upcoming releases that are now just in their infancy. For example, P.O.S flew out to Los Angeles this morning to begin work on his next solo album (ON DOOMTREE RECORDS!!!!). Money from this All Hands pre-order is helping to cover flights, lodging, studio time, and new gear while he’s away getting started on it. Not to mention that we’ve got four other rappers who are currently gearing up to start new solo projects of their own. It’s a real Circle of Life vibe that we’ve got going on here, and none of it is possible without your support. Forgive me for the fundraising tone, but it really is becoming more and more necessary for us to message out why this is so important in a time when we fully understand that you have a choice to pay for music. In exchange for your money we are trying to provide you with the very best possible music, packaging, and product that we can, every single time out the gate. I’m extremely pumped with how incredible the packaging for All Hands has turned out. 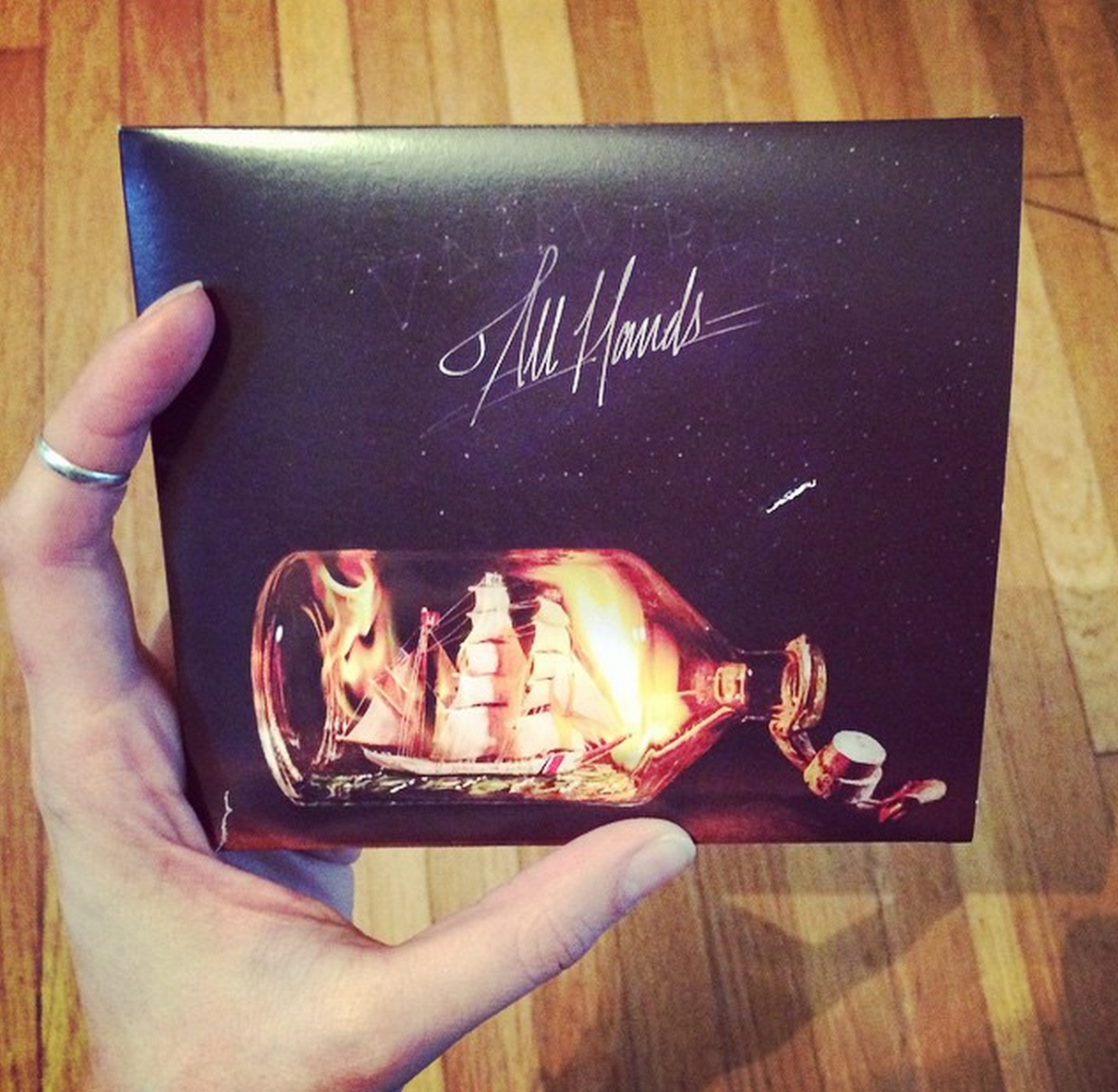 OK with that said, I will now run down the insanely cool bonus gifts that will be bestowed upon you when you pre-order All Hands. For those of you who have already grabbed your copy: Thanks a million. Truly. We could not do this without you, and you are greatly appreciated. If you’re one of those who’s been on the ordering fence for awhile: C’mooooooon already, let’s do this! It’s gonna rule! And if you’re just now hearing about the pre-order: I would strongly encourage you to go for it. It’s gonna be the best, guaranteed. See how persuasive I can be? Most importantly though, if any of you have the time or energy, please help us message this info out to the world. Whether it’s a link to the pre-order (doomtree.net/allhands), a picture of the album, or a post about the new packaging video, it all helps. The pre-order officially ends next Sunday, so we’re in the home stretch FRREAL. Alright, here goes nothing. 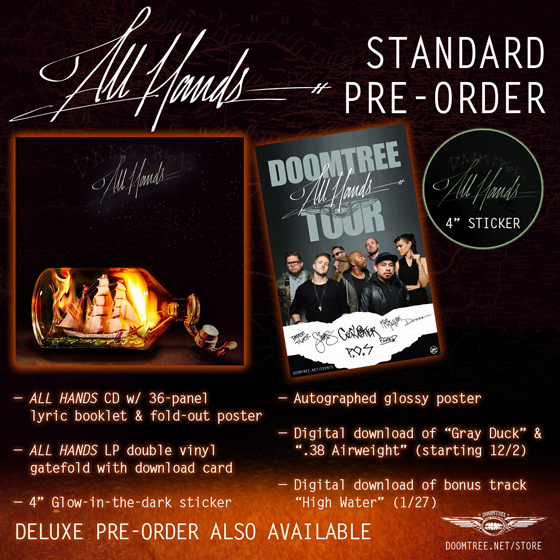 When you order the Standard All Hands Pre-Order, you not only get your choice of CD (w/ 36-page lyric booklet and fold-out poster) or LP (gatefold double LP with lyric sheet and download card), but also all of the following free bonus gifts:

This is definitely a perfect option for those of you balling on a budget, or just plain concerned that this money may eat into your weekly Lunch at Arby’s fund (Papes, I’m looking at you). If you’re really trying to get crazy with it though, you’re gonna want to check out this Deluxe All Hands Pre-Order. By far the most over the top pre-order we’ve ever attempted. 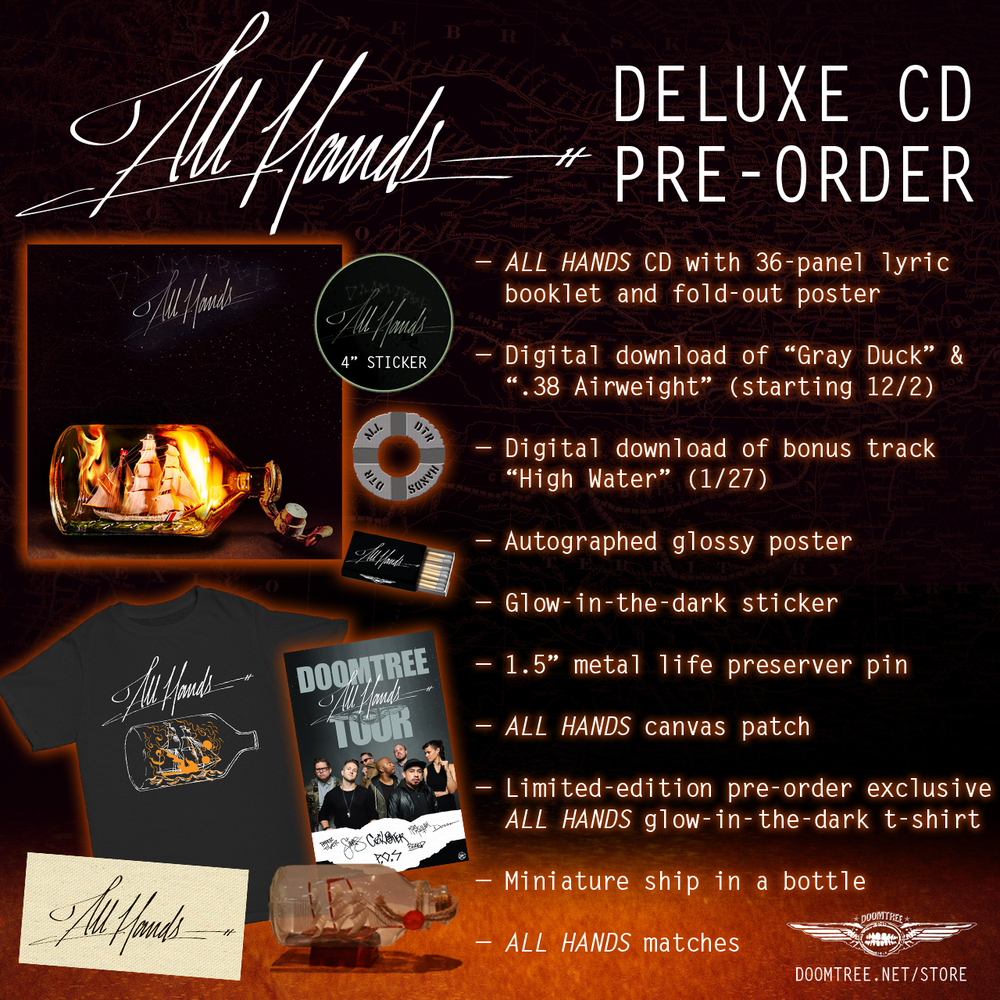 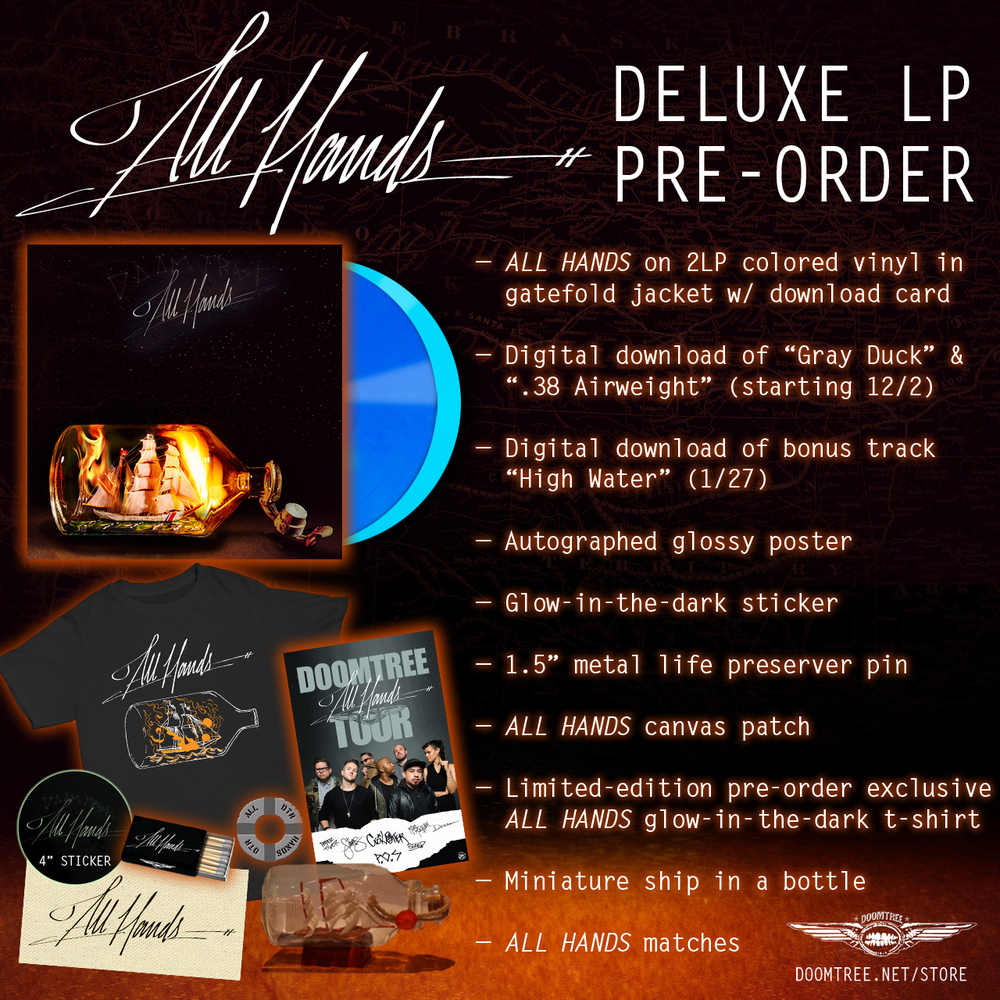 Here’s what you’ll get when you order the Deluxe All Hands Pre-Order, in addition to every single item listed above in the Standard Pre-Order:

– A MINIATURE SHIP IN A BOTTLE!!! (like on the album cover. Seriously, next level.)

– Super limited-edition glow-in-the-dark All Hands shirt available exclusively with this pre-order. This version of the shirt will never be available again and is being printed to order based on how many pre-orders we get.

– 1.5″ metal DTR life preserver pin (to go with your No Kings and Four Fists pins)

– VINYL AFICIONADOS: The deluxe LP option also comes with extremely limited double blue vinyl (light and dark), which is only available through this pre-order. Only a few hundred colored copies remain.

Here’s a couple teaser pictures of a few of the bonus gifts, just to give you an idea of what we’re working with here: 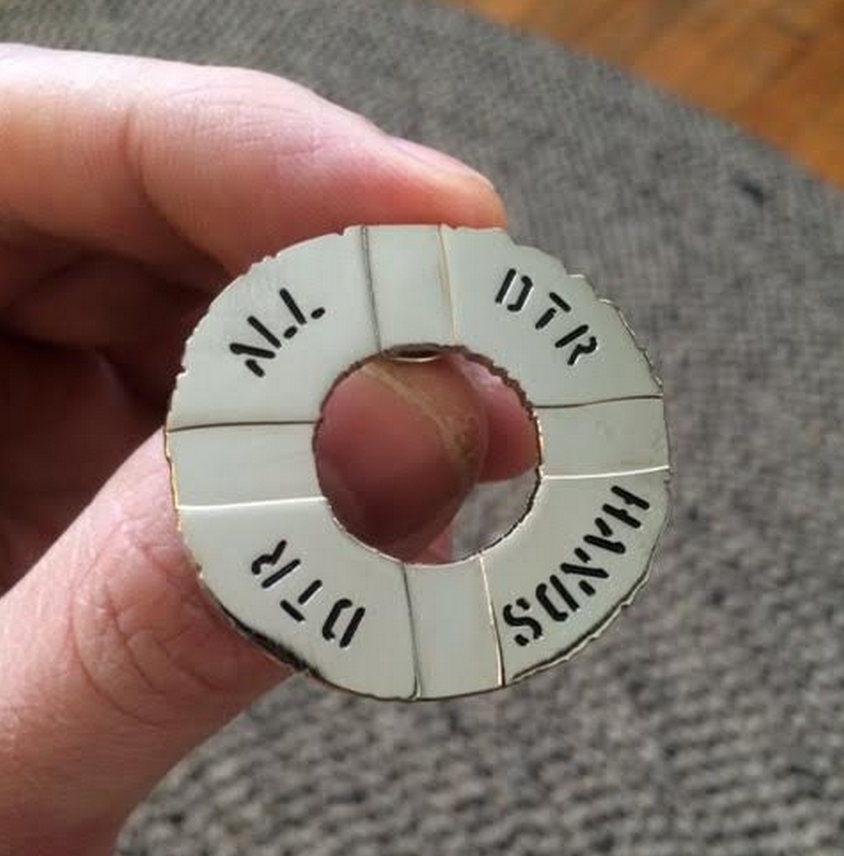 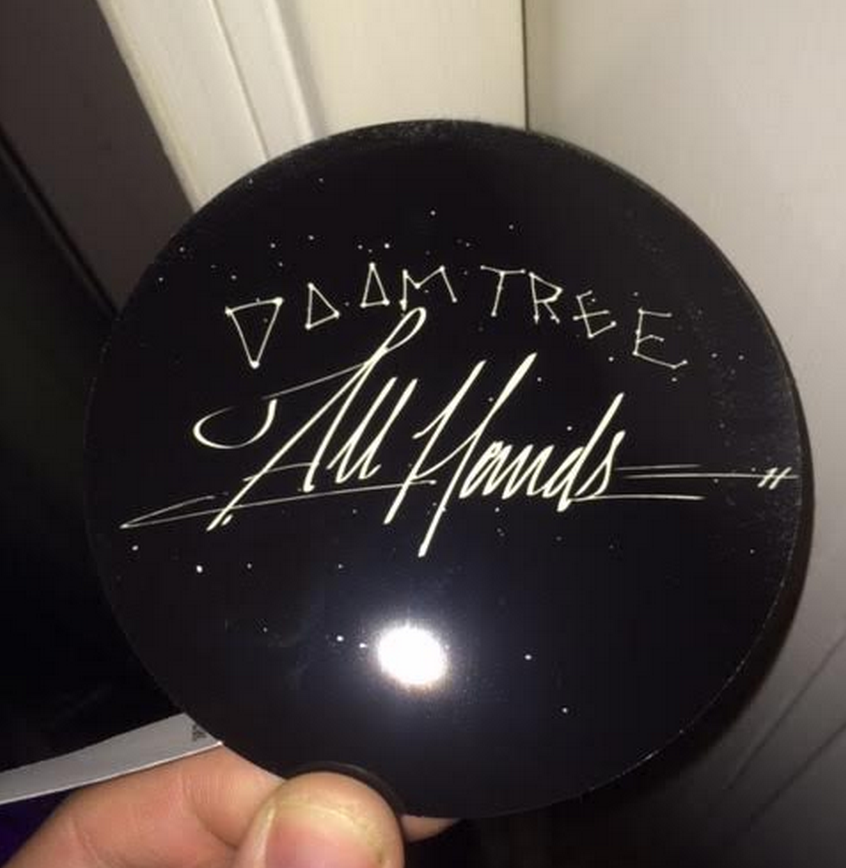 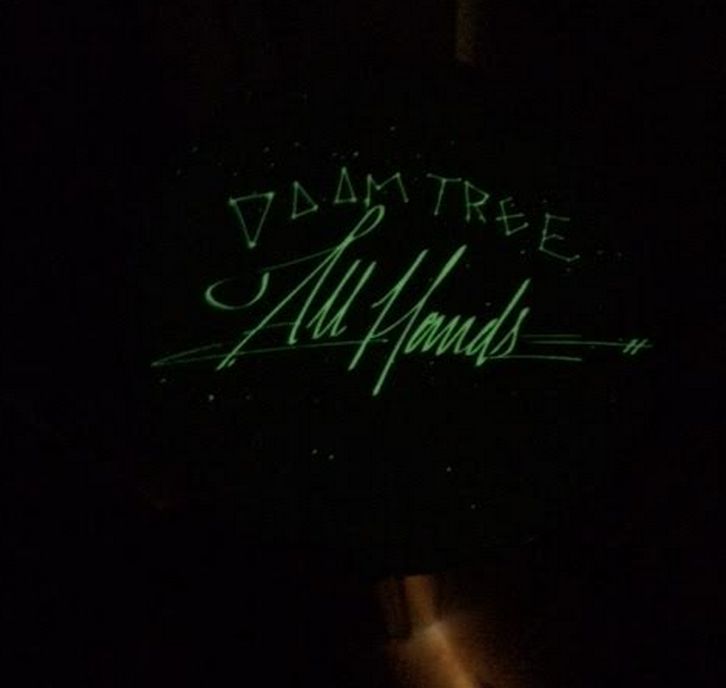 Alright, that’s probably enough pre-order mania for this week. More pics and details coming next week as release day approaches. In the meantime, you can grab your copy right HERE. Thanks for reading through all of this.

Now for a couple of super quick Doomtree-related shows going down this weekend. On Saturday night, our very own Mike Mictlan will be performing at First Avenue at the homie Sean Anonymous’ big annual birthday show. Cecil will also be there playing with his band Commanders Handsome. Check out ticket info and even more details right HERE.

That same night, Saturday 1/10, I’ll be down at the Varsity Theater playing with Lizzo for the To The Bridge Foundation benefit show. Our good friends Toki Wright & Big Cats are also on the bill. Ticket info and details right HERE. Should be a great night. 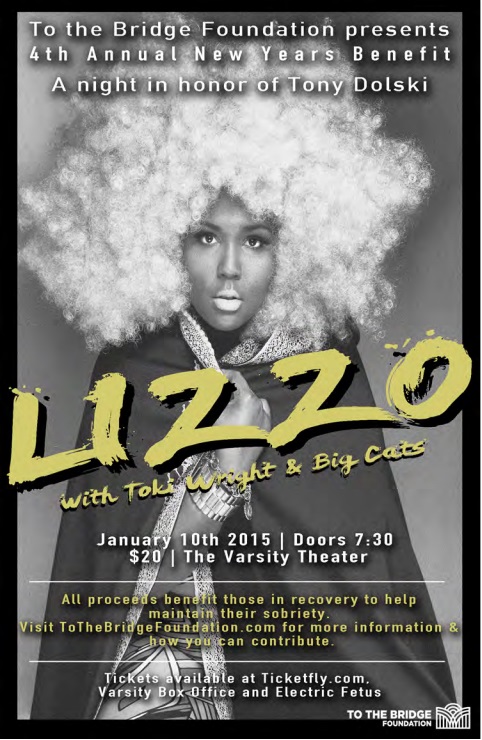 And for those of you in or nearby the Duluth area, we’ve got some big show news to drop on you in the next 24 hours. Sorry for the tease, but definitely STAY TUNED.

I’ll leave you with a bunch of Bonus Baby Pics from over the break. Cam and Lou are just about to hit the 10 month mark and are cruising right along. They’ve been getting into the whole “stand up and walk around while holding onto things” b-boy stance for the last week or so. It’s pretty awesome. Also, everyone wears sweatsuits at our house all winter long. It has now become mandatory. 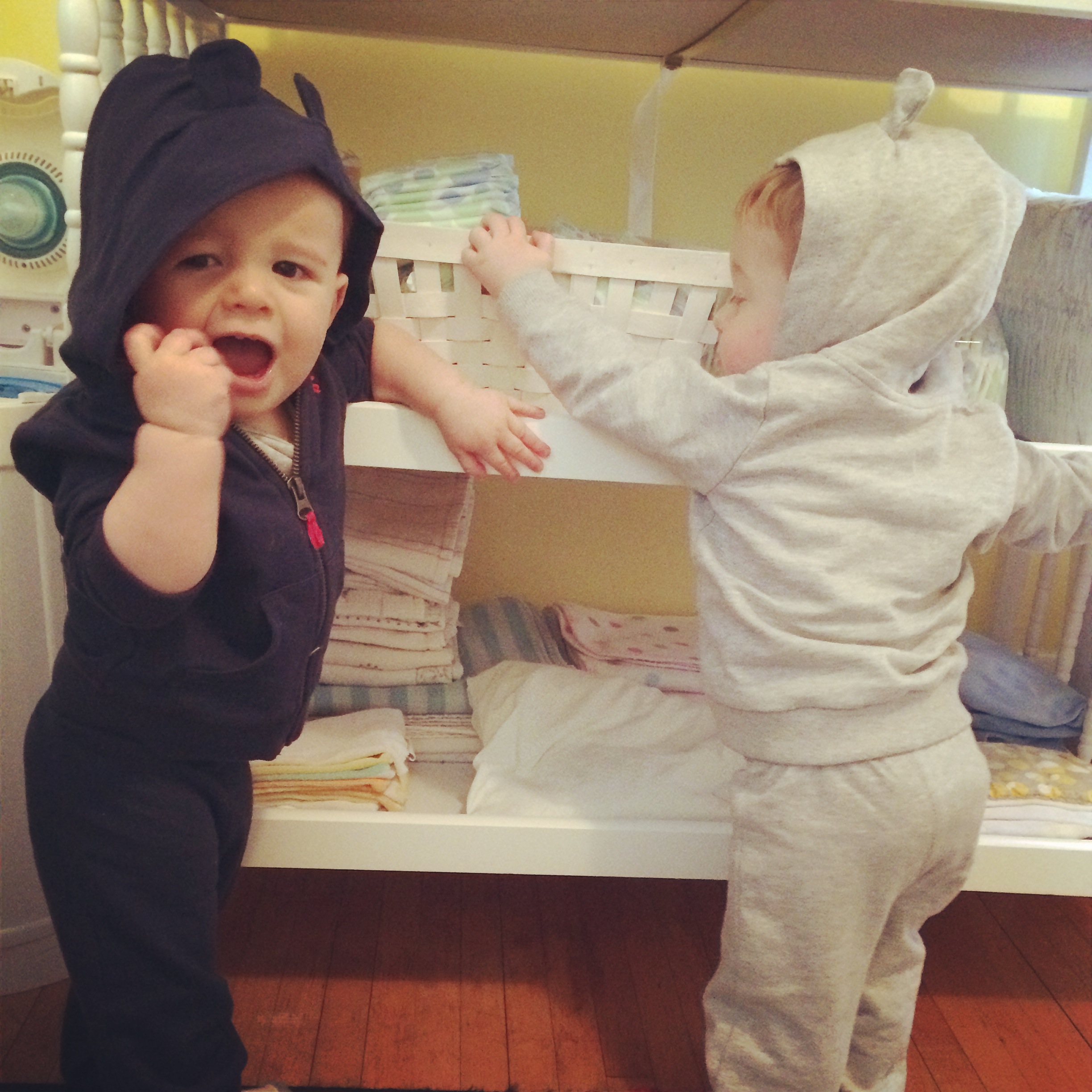 We took the big Party of Five out for their first big snow, to mixed reactions naturally. Lou was super into. Crab Man Cam, shockingly, not so much. He’s become quite the skeptic in his old age. 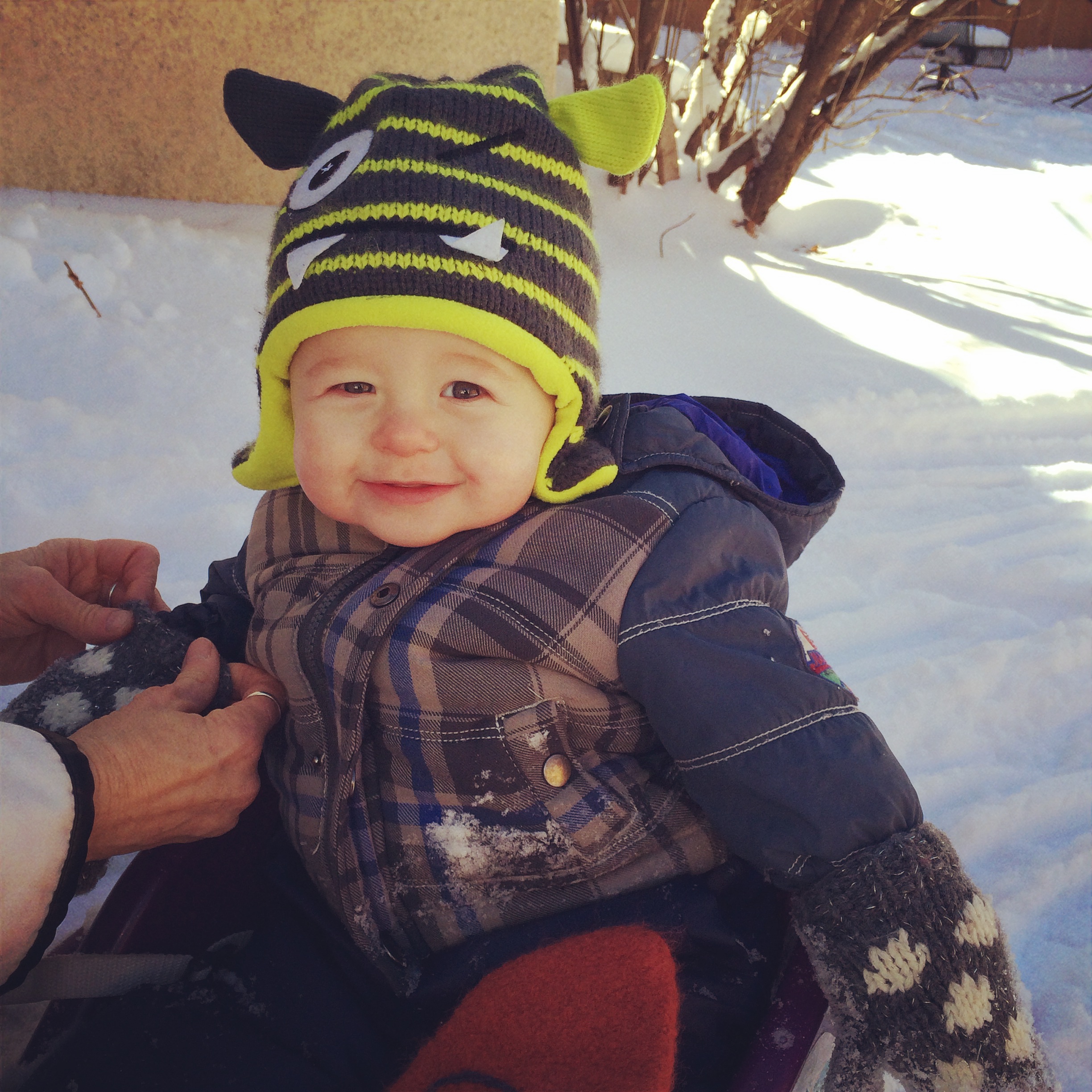 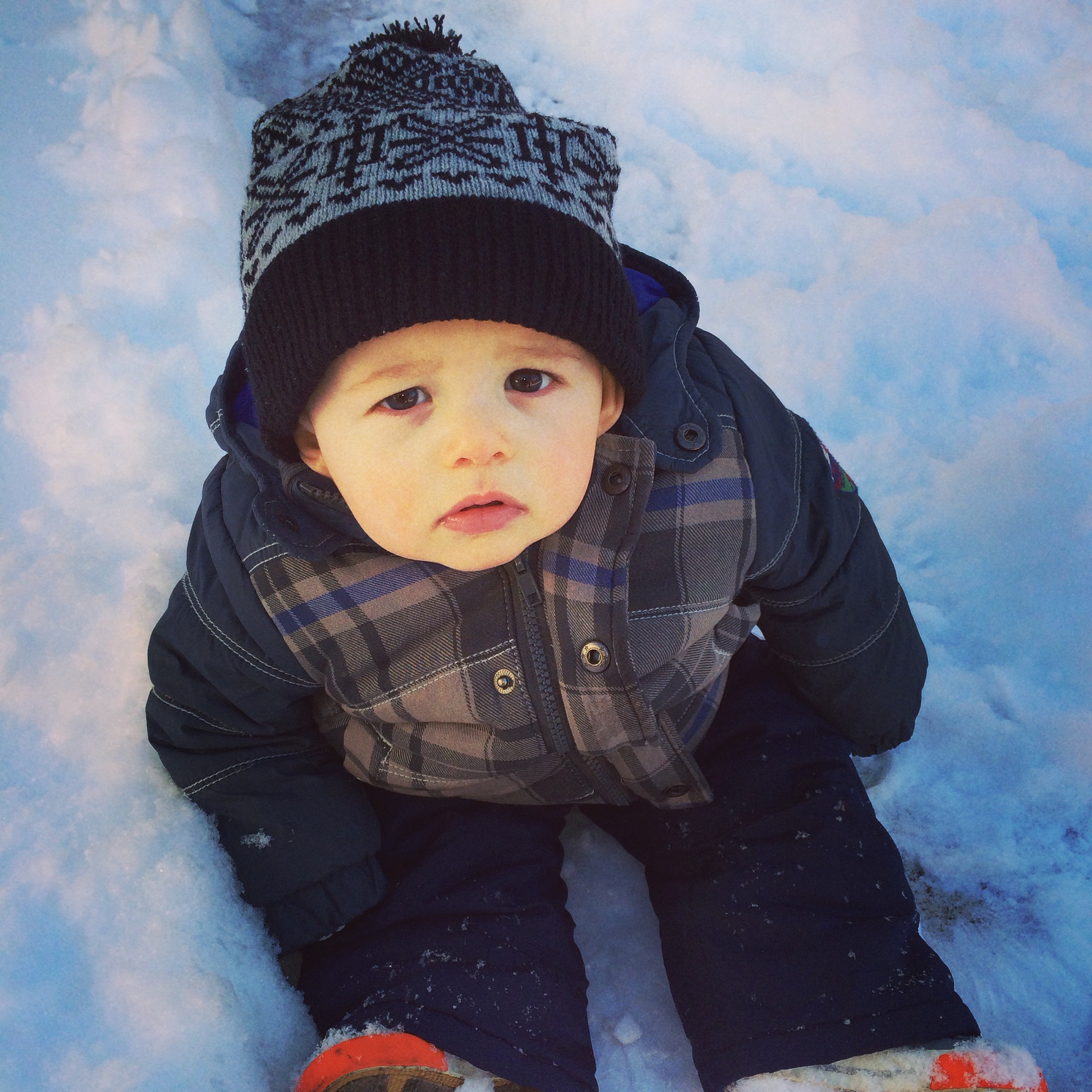 Penny even got into the action. Huge shouts to her 93 year-old great grandma Dot for the new coat! 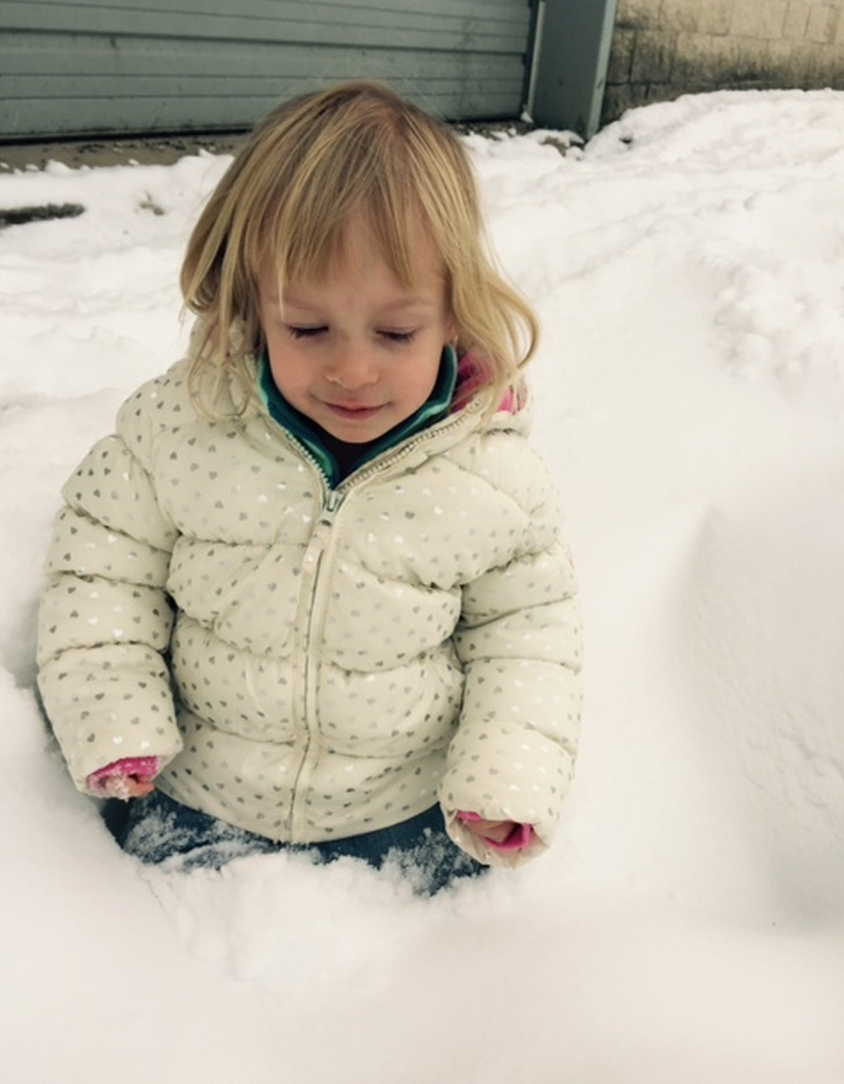 Speaking of P, we got to take her out to the Children’s Museum this past week and she had a total blast. So much of a blast that we couldn’t get her to stand still for a single picture. Here’s a blurry one of her going down this cool slide for about the hundredth time in a row. And it’s still No Kings. 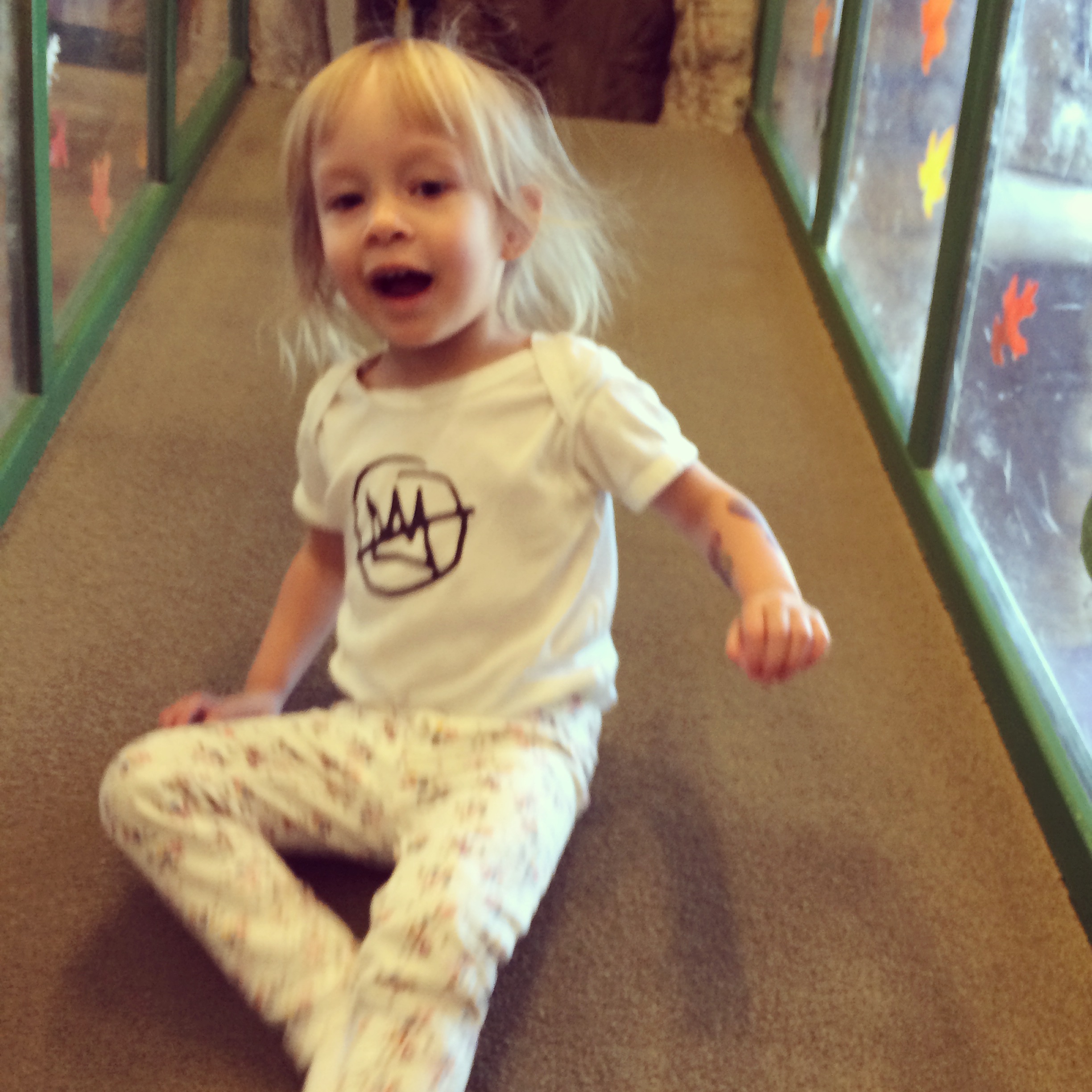 OK, that for real does it for this first post of the year. I hope you all have a great week getting back into the swing of things. Make sure to spread the word about the pre-order if you get a second, and pick up your copy right HERE if you haven’t yet. I’ll see you next Tuesday for a ton of new big time announcements. New music coming sooner than later! 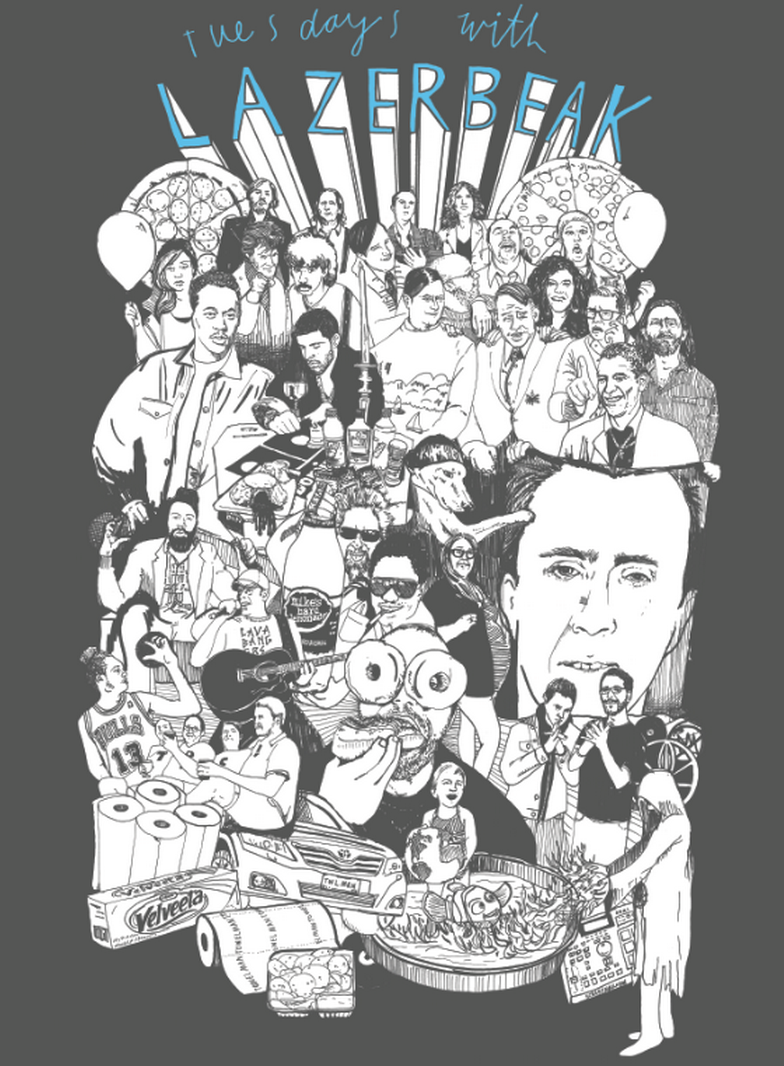