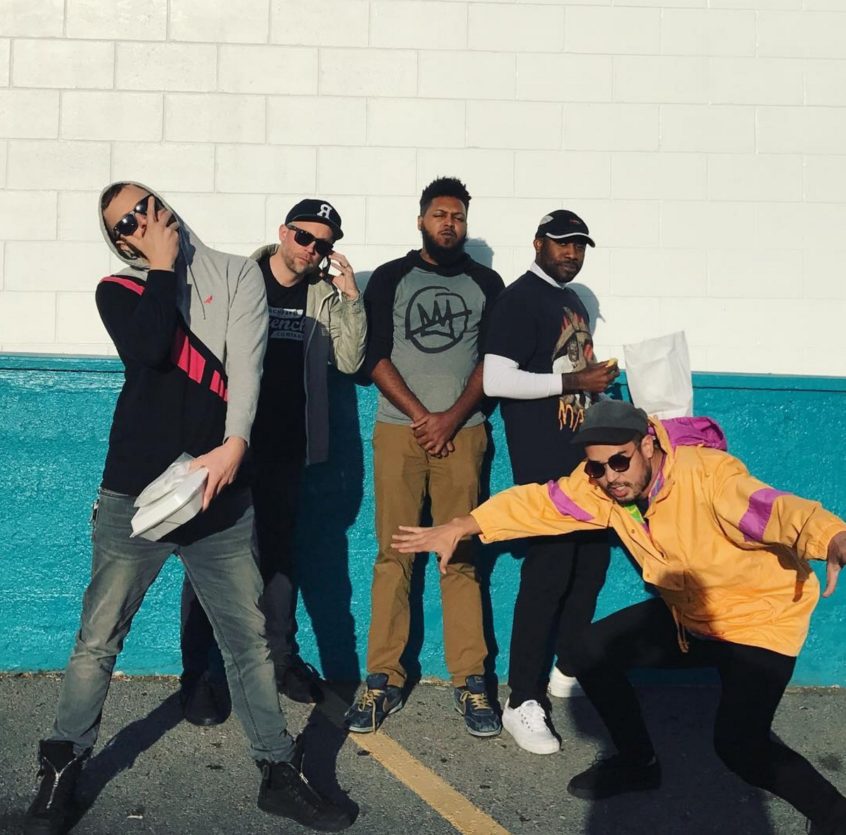 Welcome back to a brand new edition of Tuesdays With Lazerbeak! The More Than Ever Tour just wrapped up its second week on the road so let’s check in with Sims, Ander Other, Makr, ShowYouSuck, and The Hood Internet as we jump right into another little photo recap of Week 2. Here’s the squad posted up somewhere in the middle of America making deals and eating leftovers. 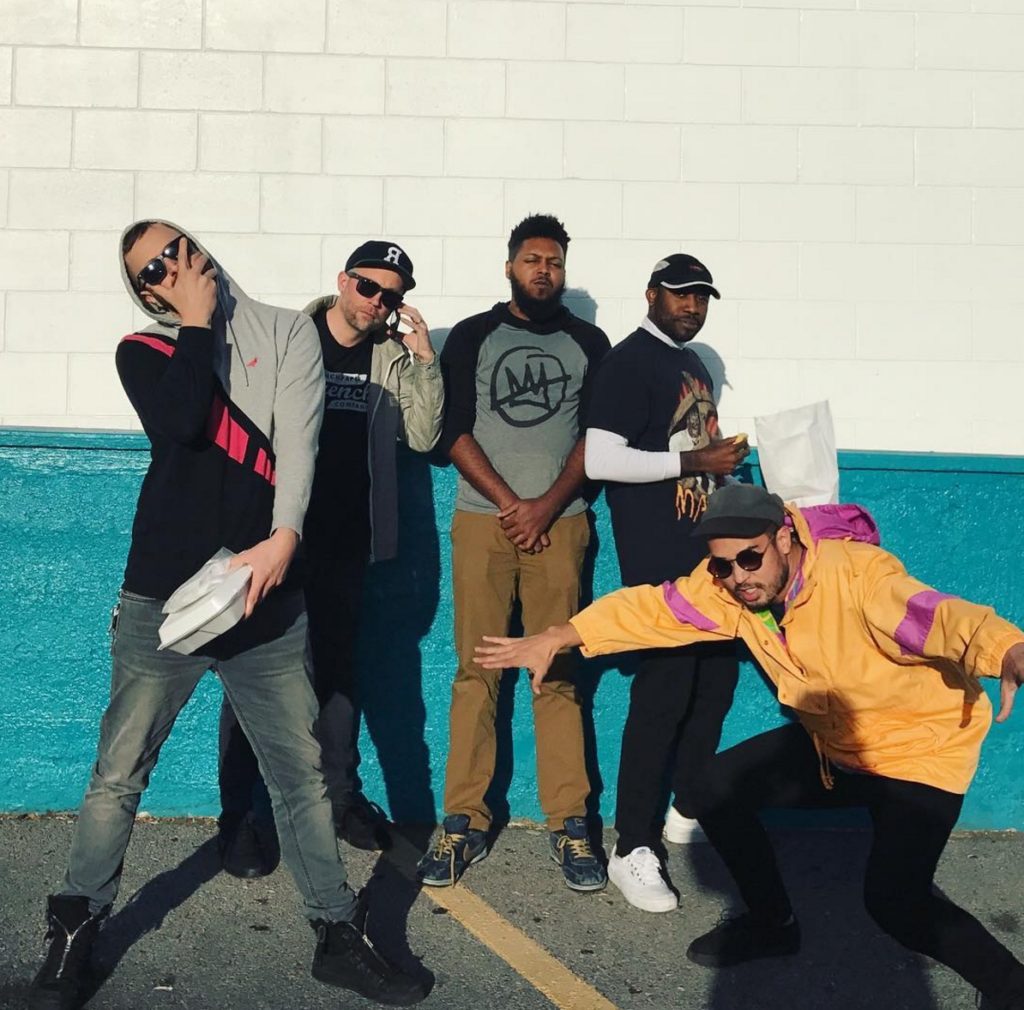 And here’s Sims, Makr, and Ander getting the lights and vizualz all set up for the show in Boston. 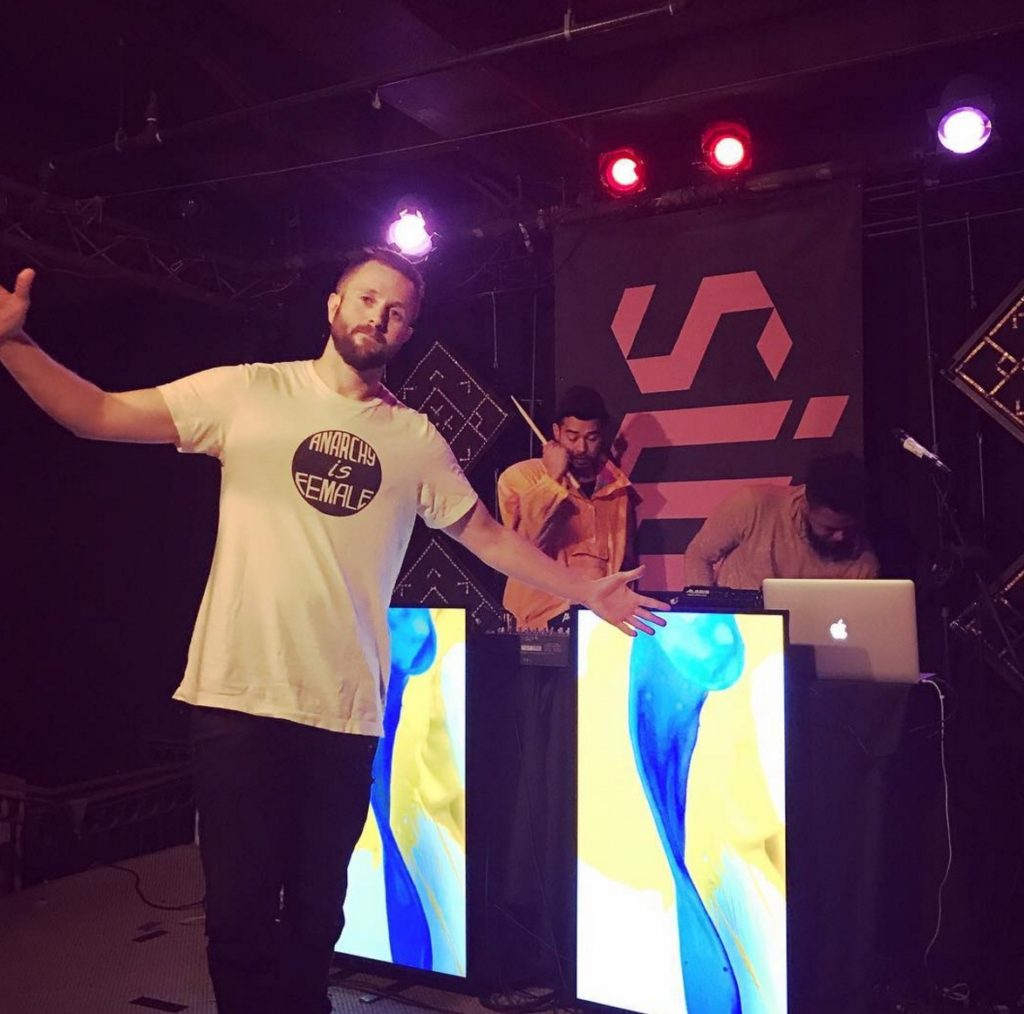 As many of you probably heard, Sims’ tour van was broken into late last week and robbed of most its contents. Such a crushing blow and absolutely devastating for a bunch of indie musicians balling on a budget to bring their music to people across the country. But in the midst of all that awfulness we set up a GoFundMe page to help the dudes get back on track and in under 24 hours had raised the nearly $19,000 needed to get everything back and continue the tour. I can’t even begin to say how grateful I am to our people and our friends and our fam and our fans for immediately spreading the word and donating whatever they could for the cause. Thank you. TTBT 4 EVA. I’ll let Sims say the rest. Here’s what he posted after hitting the GoFundMe goal over the weekend. 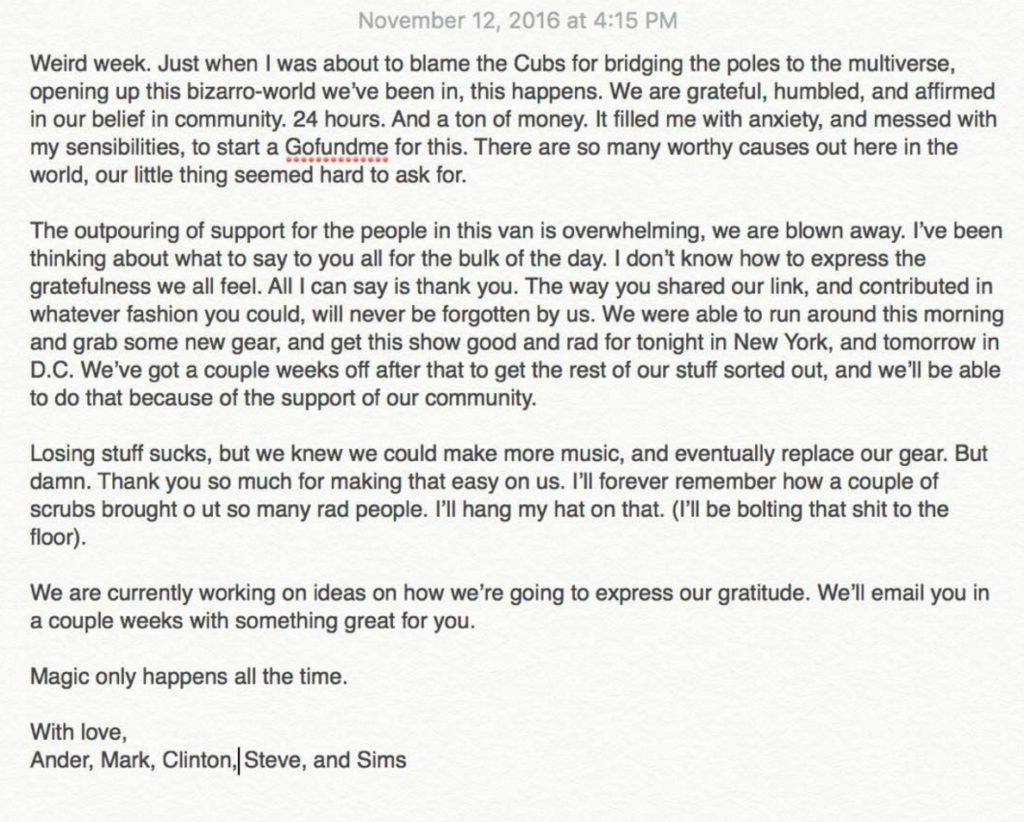 And with that the dudes bounced back and knocked out the final two East Coast shows of the run. Here they are somewhere in DC at the oldest vape shop in the country. 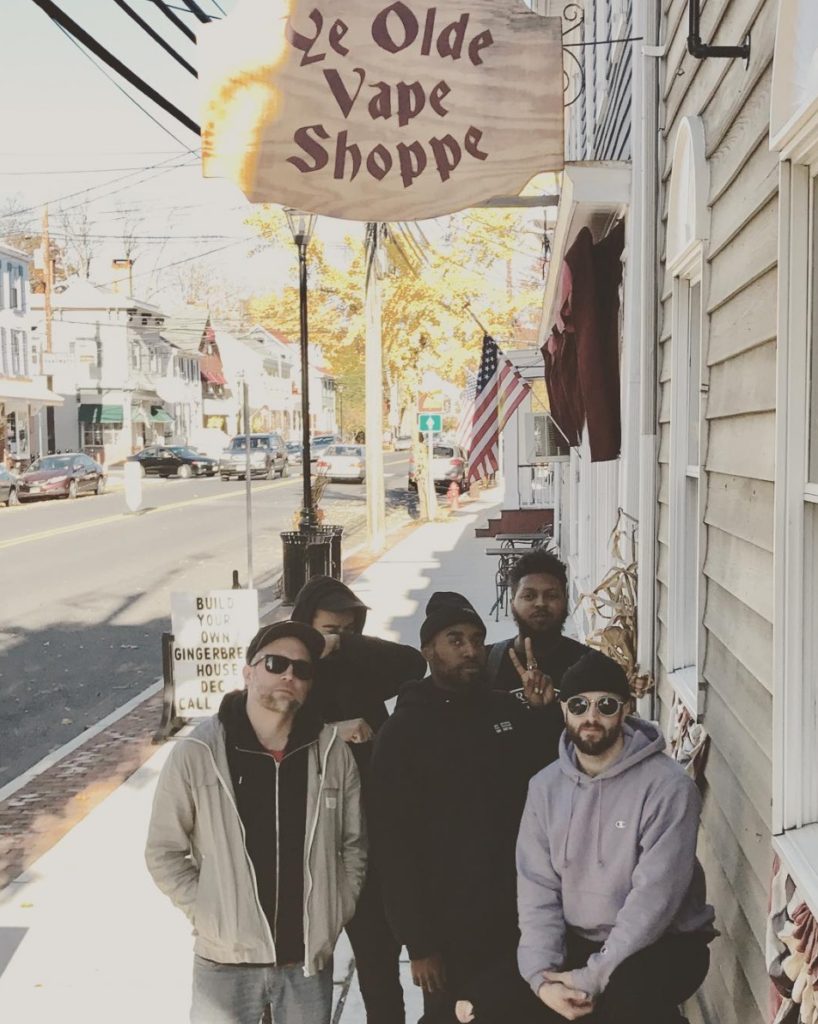 And in case it was ever even a question, these guys really……. 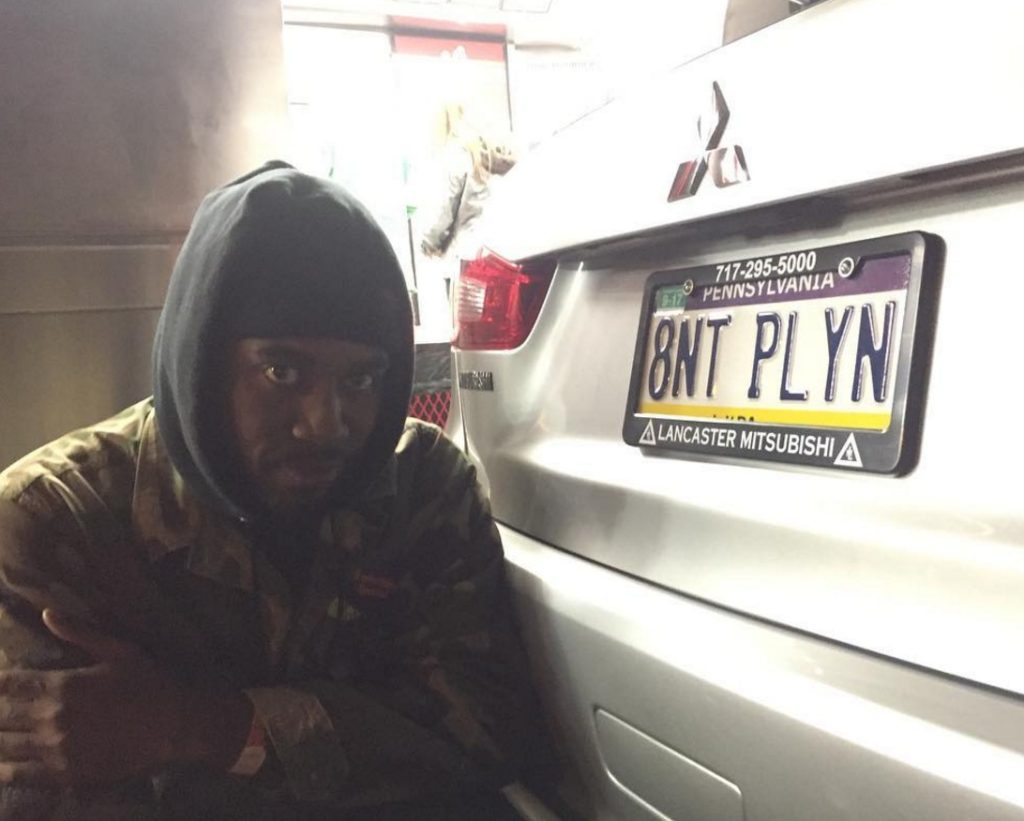 Here’s the legendary Air Credits posted outside the world’s greatest fast food fried chicken establishment. I’m not really sure of anything else happening in this picture, but I’m hoping they just purchased a plastic bin full of muscle milk powder from the local GNC. 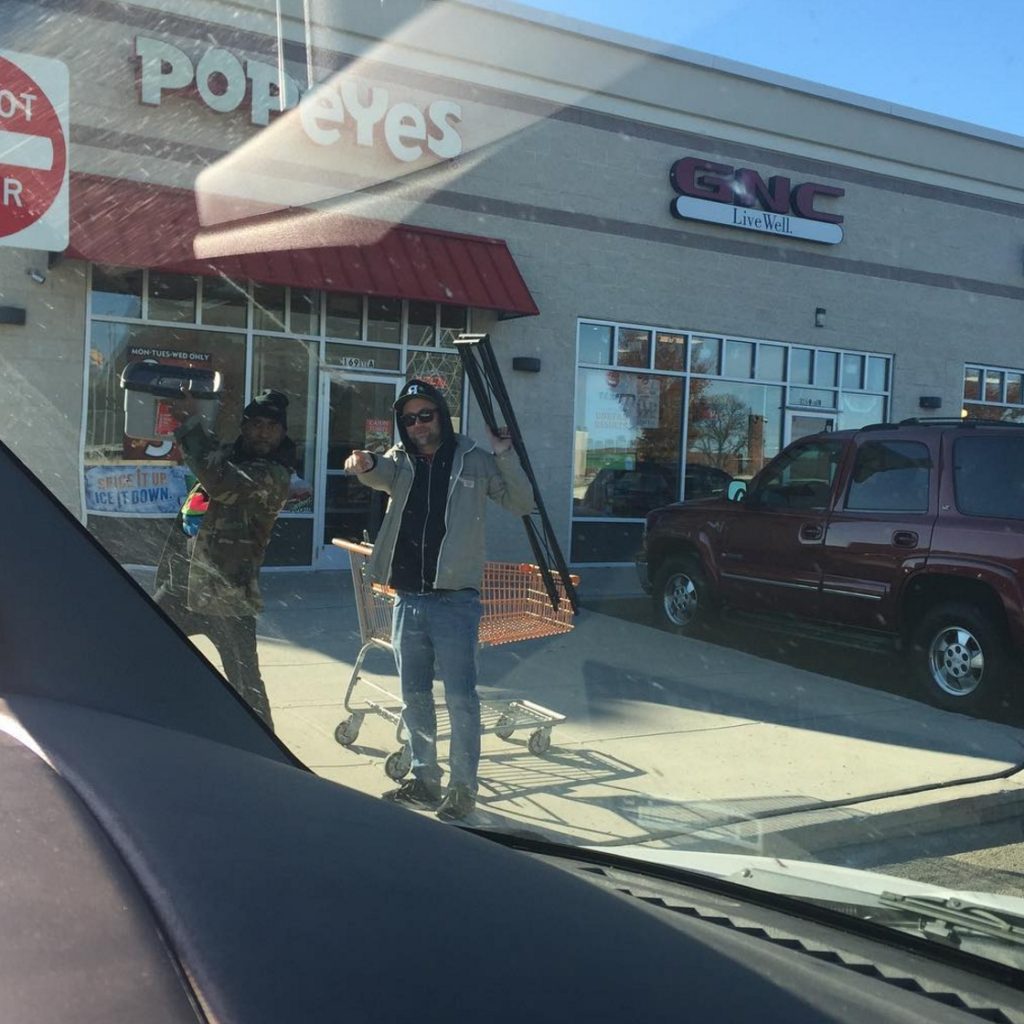 Makr rocking a cool stance and one of the better jacket color combos I’ve ever seen. TRENDSETTER. 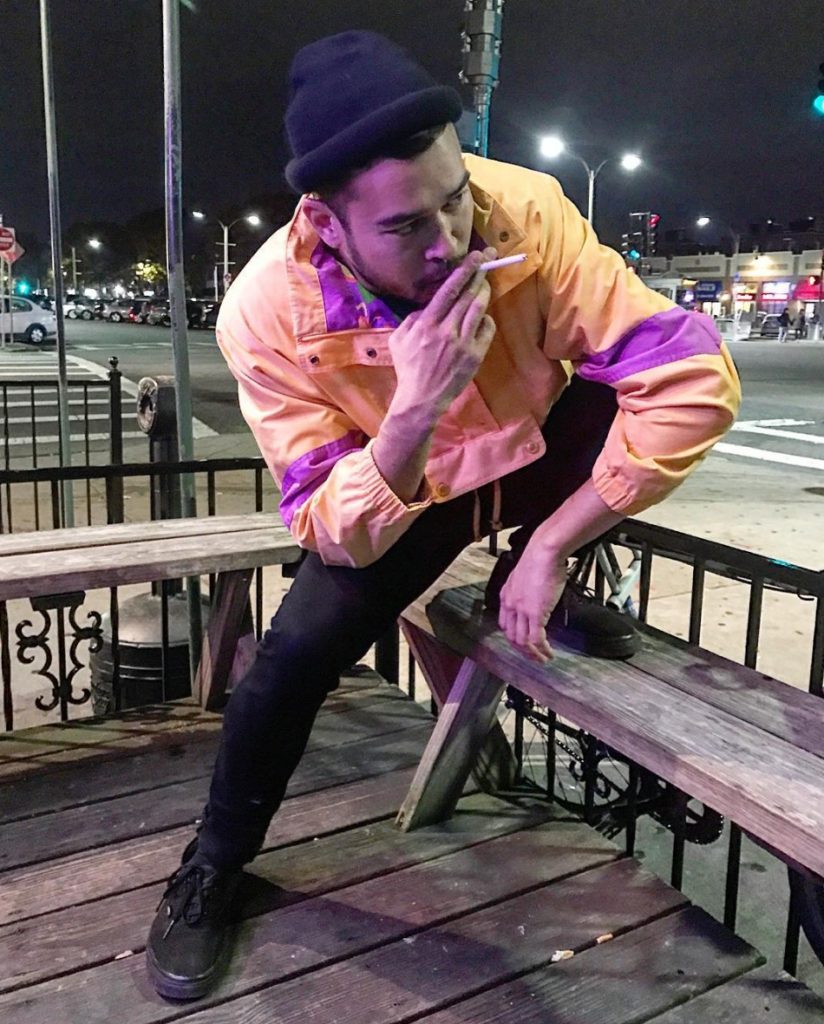 The guys are headed back to the great Midwest as we speak and will be stopping in Chicago in a matter of hours to knock out a live Audiotree performance (Tuesday 11/5 at 1:oopm CST). Check out all the details and watch the live stream right HERE. We’ll make sure to post the full performance once it goes up later this year. 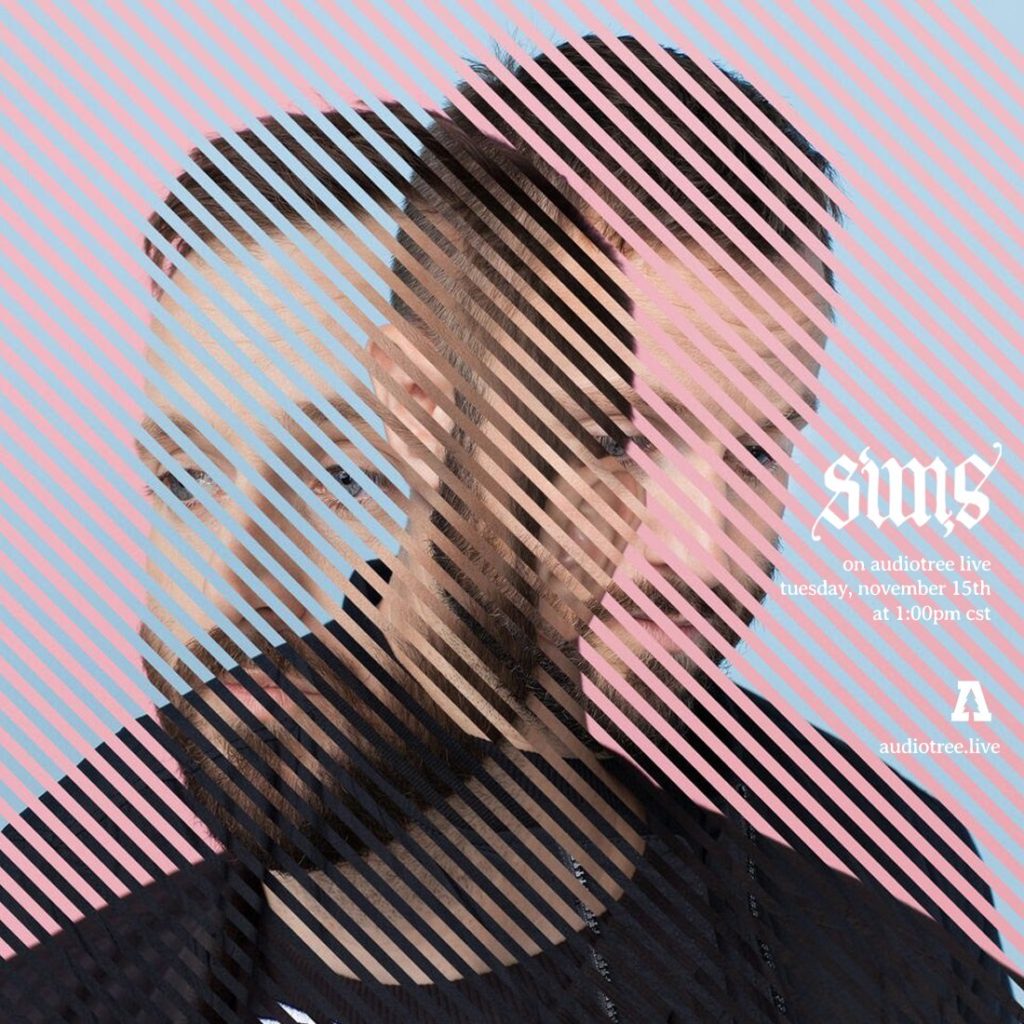 Sims will return home for a few weeks before cruising through Denver and out to the West Coast and Southwest for the second leg of the More Than Ever Tour at the start of December. Check out all the dates below and stay on the lookout for some more announcing real soon. Grab your tickets HERE. 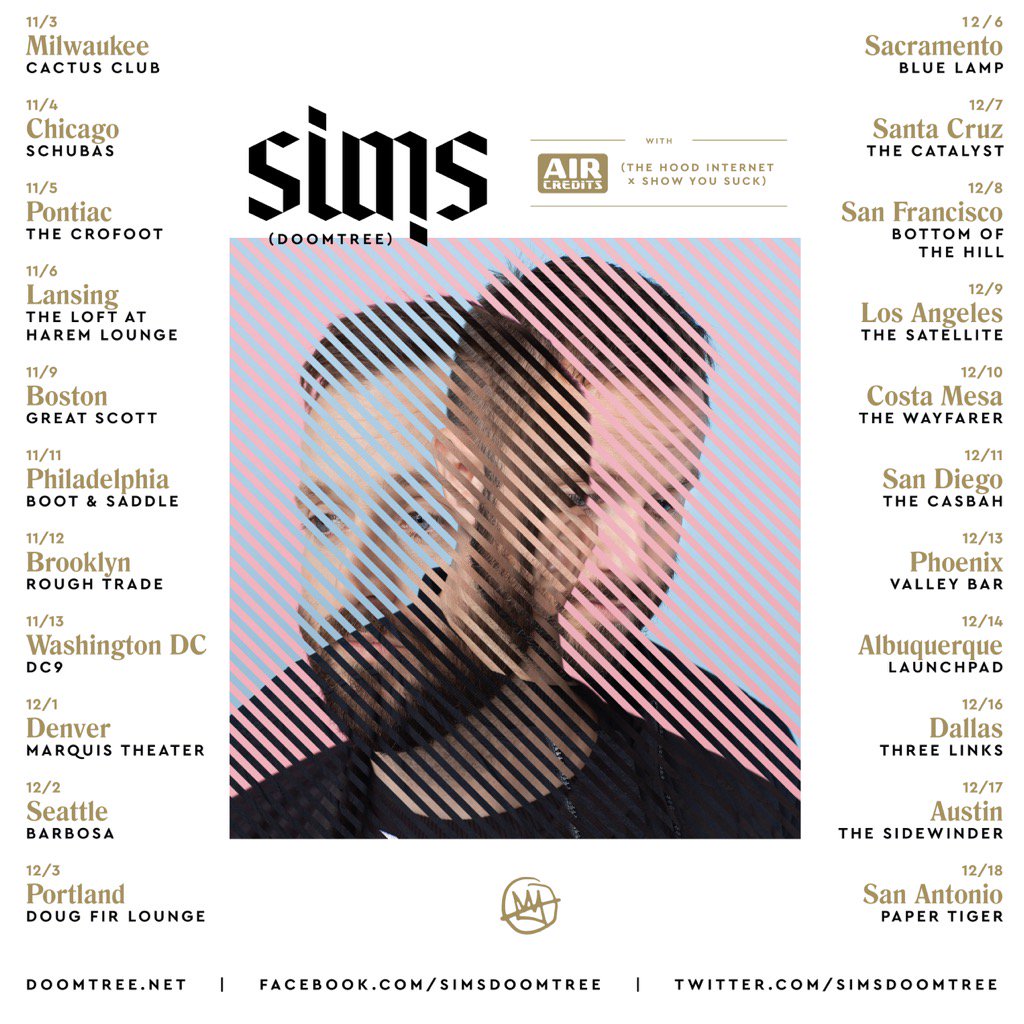 Last week we premiered the brand new Anti-Flag, P.O.S, and Tom Morello collaboration “Without End” and this week we’ve got that single’s super awesome music video to play for you. Check out the 360 degree video below. You can move your cursor around the screen to see all sorts of bonus 3D content and learn what P.O.S looks like as a shape shifting hologram. So cool.

And don’t forget about the most recent P.O.S one-off single Stef dropped last month when announcing his first headlining tour in over four years. Here’s “Woof” produced by BJ Burton.

Speeeeeeeaaaaking of P.O.S tours (this Segue Streak is just too easy), don’t forget to check out all the dates below and grab your tickets for the 2017 run right HERE. Should be a total blast.

That about does it for Doomtree-related news this week. I was out of town a bunch last week so I didn’t get a chance to check out much new music. I’ll hit you with a handful of Bonus Jams that I was bumping on the plane though. The new Tribe Called Quest album is really really good and this “We The People” song is right up there with some of the best music they’ve ever made. Check out the lyric video below and make sure you watch their SNL performances if you missed them on Saturday. Truly inspiring stuff.

A Tribe Called Quest – “We The People”

Not so much a musical Bonus Jam, but if you did miss SNL last weekend I absolutely implore you to watch Dave Chappelle’s opening monologue. He nailed it. Best to ever do it.

Drake and 21 Savage just dropped a super weird lo-fi video for their “Sneakin'” collaboration and I’m all about it. Check it out below.

Our good friend and producer Budo just dropped a brand new collaborative single with singer Kris Orlowski called “Waterski To Texas.” You probably know Budo by the work he’s done with Macklemore, Grieves, M.anifest, and Joe Pernice. I’m always excited to hear where he’s taking things next, and this song does not disappoint.

Local favorites Communist Daughter are back with a brand new album after a long hiatus and it’s a crusher. Check out lead-off track “Hold Back” below. Super pumped to check out the rest of the project. Glad to see these guys back in action.

I’ll close things out with a just-released track and video from Toki Wright called “The Chaos Weapon” which lays out some of Toki’s thoughts post election. Very much worth the watch and listen. Highly recommended.

I’ll leave you with a few Bonus Baby Pics before getting back to work. My brother-in-law JC got married over the weekend and our whole Party of Five was in the wedding party. Between working on a best man speech and trying to get all the kids presentable I didn’t have much time for photos, but here’s a few my mom and wife were able to snap. Still can’t believe we got all these guys to dress up. Here’s Laid Back Lou riding a toy horse while waiting for the ceremony to begin. 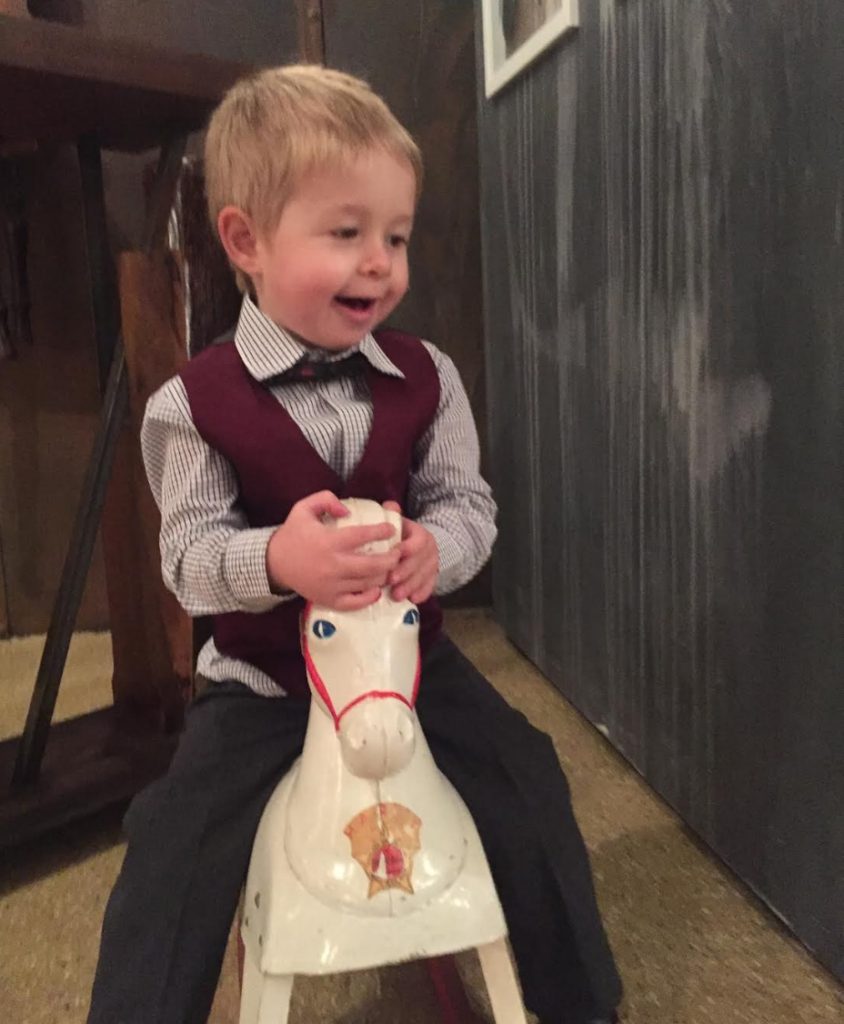 And here’s me and Cam taking a quick breather. Truth be told I was trying to distract him so I could sneak a bow tie on him, but his highly developed peripheral vision was just too good. 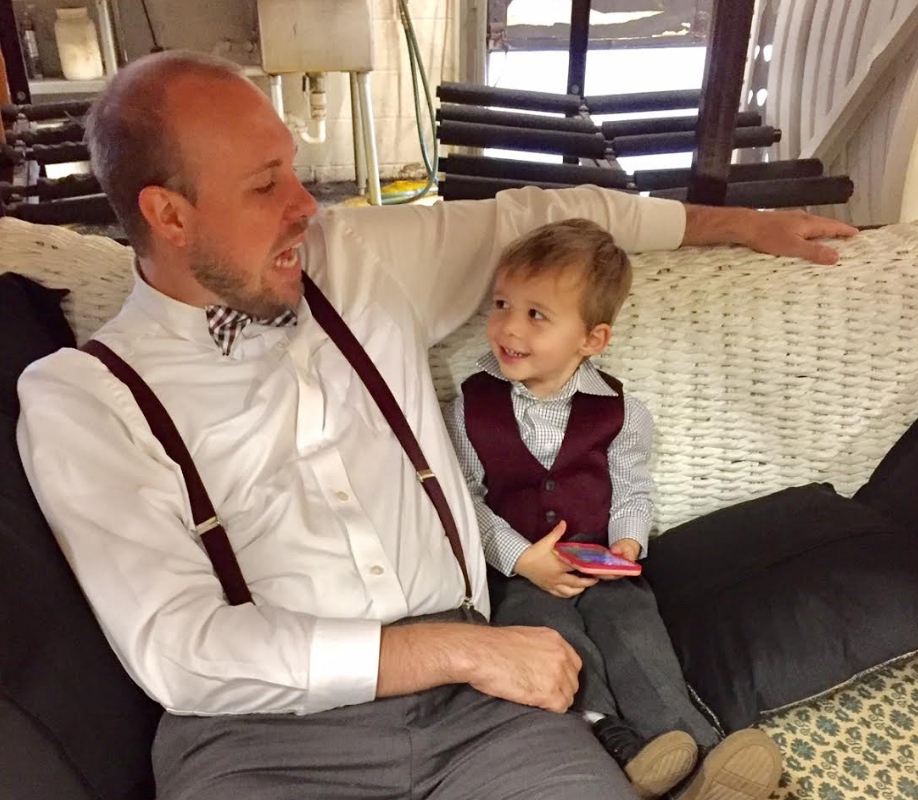 Here’s Penny all dolled up and playing a Simpsons pinball machine with her new cousin and bestie Jane. 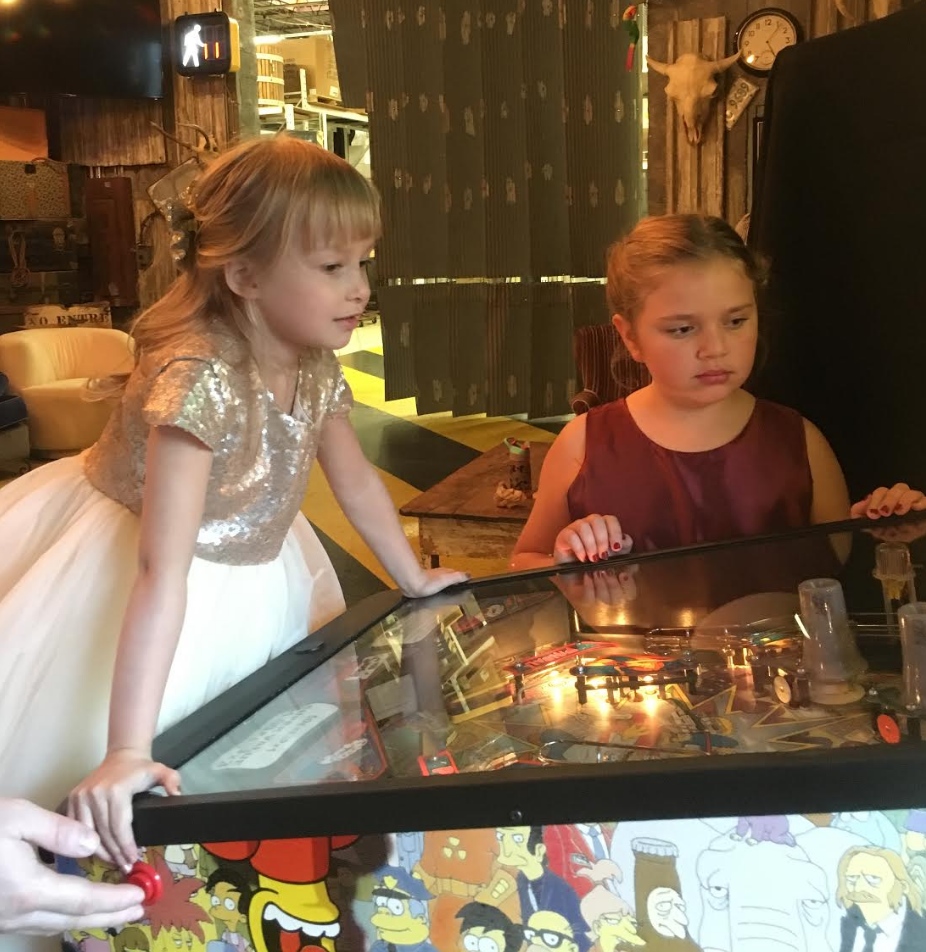 P got to walk down the aisle with Jane and be a flower girl. Here she is contemplating the heavy responsibilities that go into kicking off a wedding ceremony. 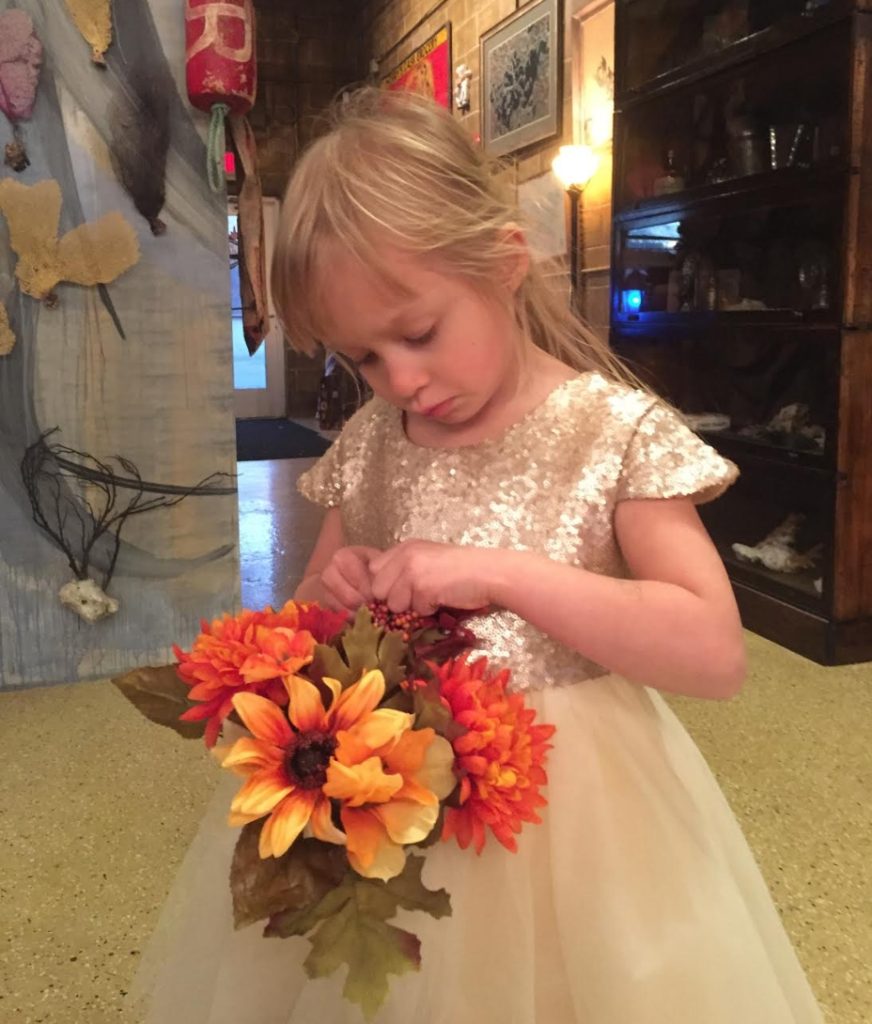 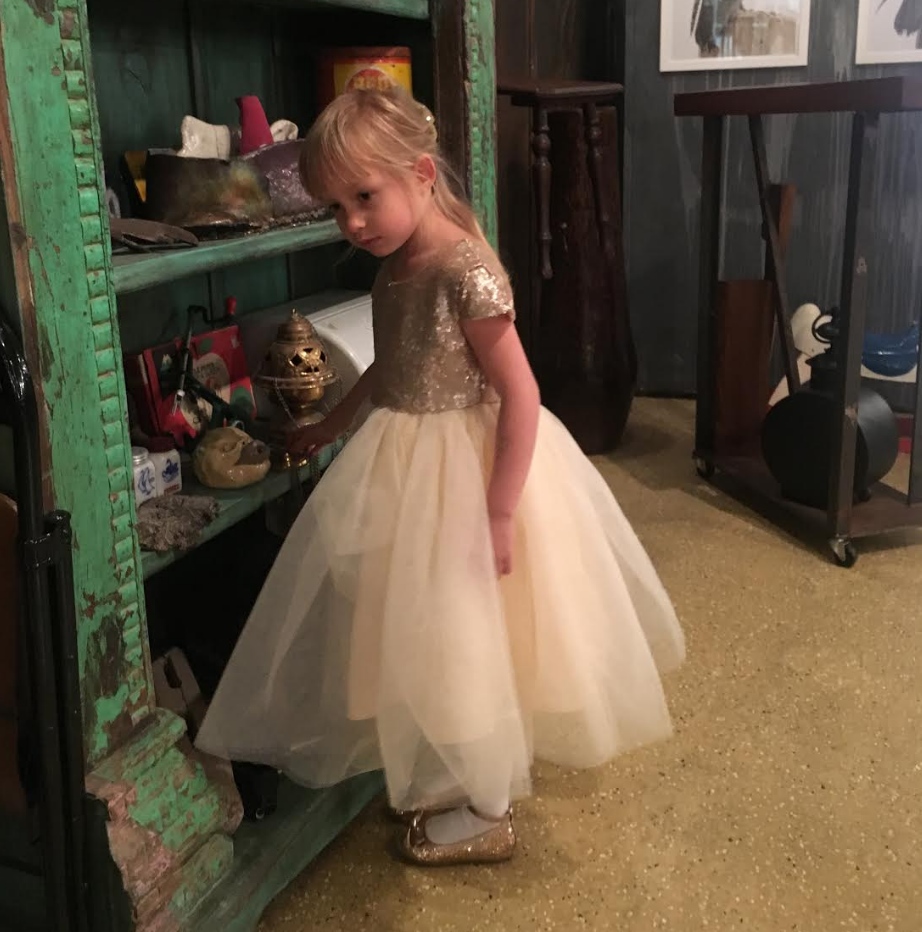 One more of Lou happy as can be. I seriously am thanking the heavens for iPhones and tootsie roll pops. Don’t know how we would’ve made it through this thing without them. 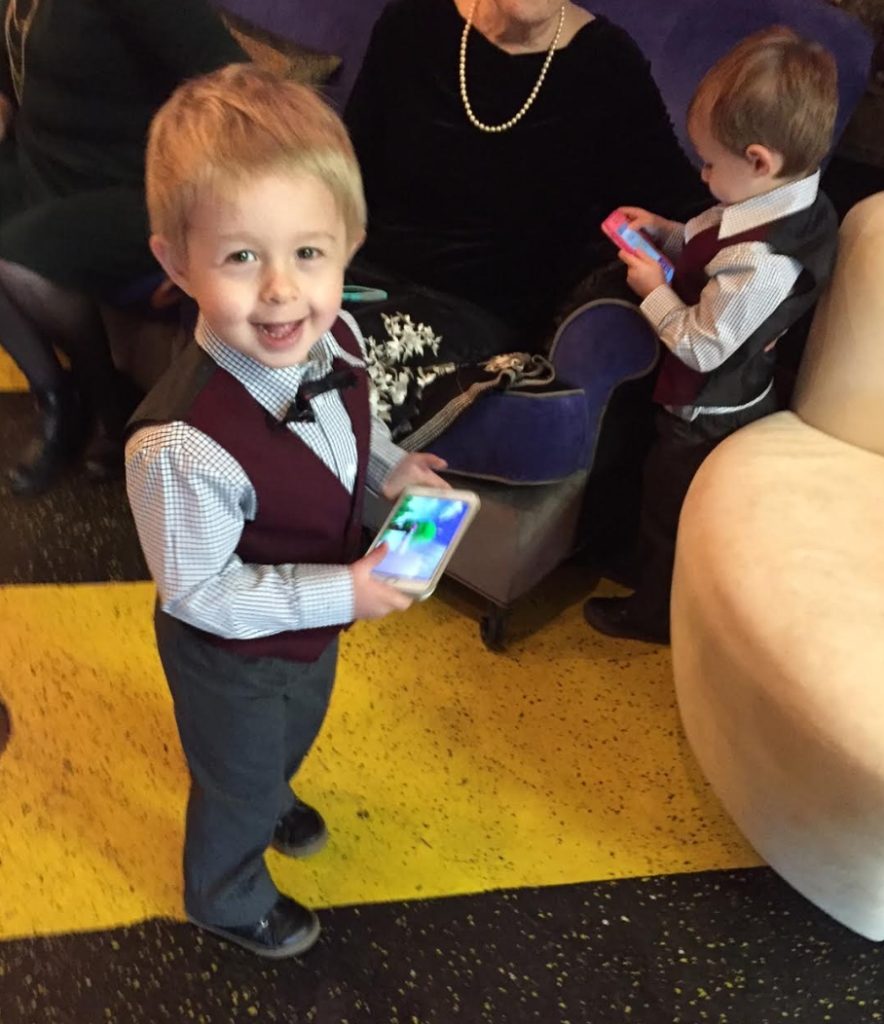 I’m proud to report that all three kids made it down the aisle and through the entire ceremony without screaming, yelling, or having to be escorted out. A true miracle. NAILED IT. Here’s Penny celebrating before the reception kicked off. 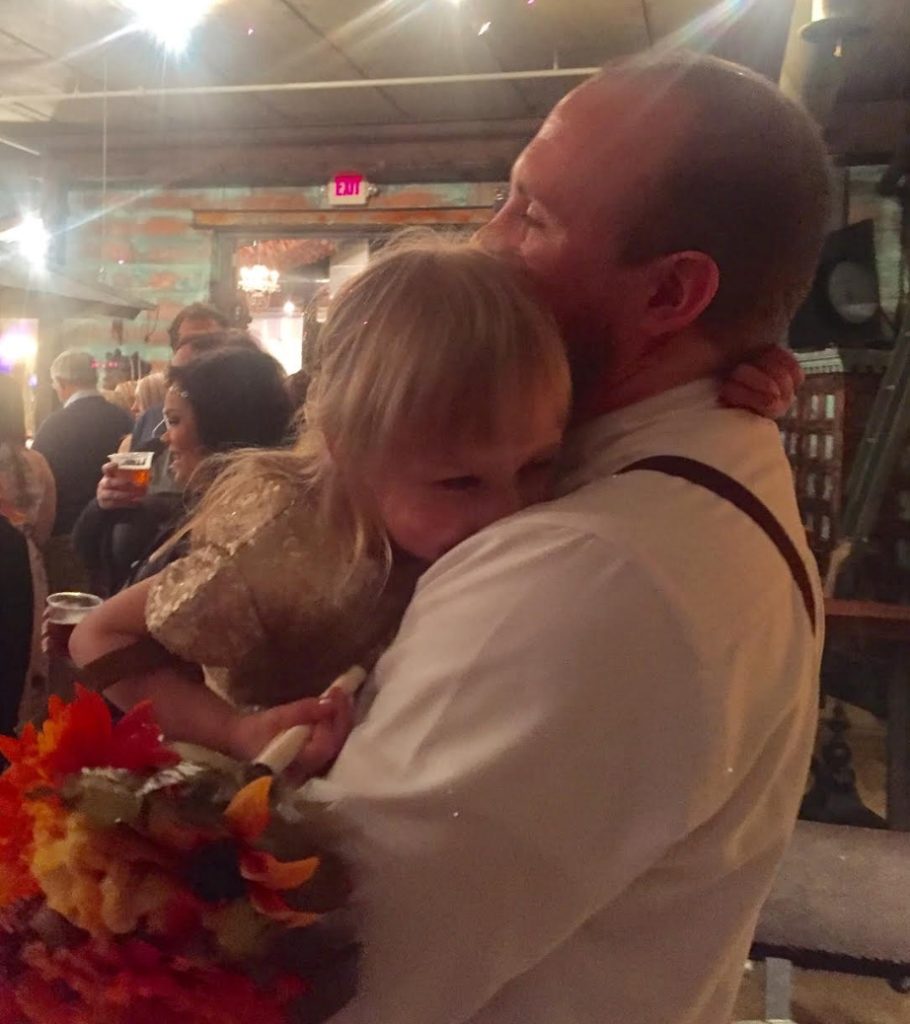 Alright, that does it for me. I hope you all have a wonderful week and I’ll see you back here next Tuesday for another round of TWL!