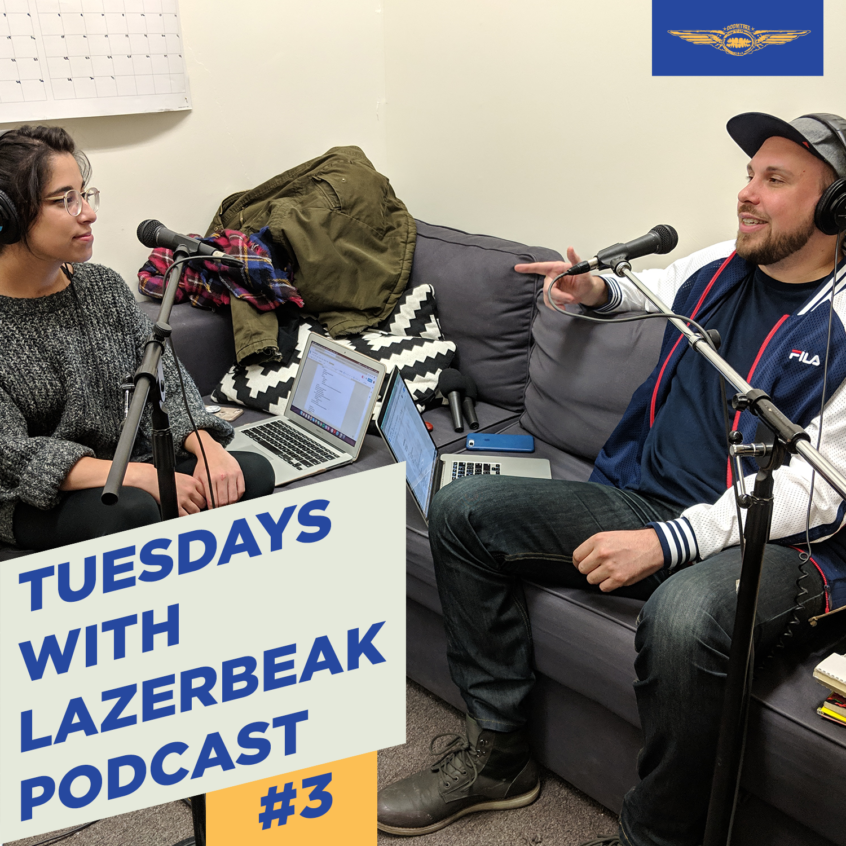 Welcome back to a brand new edition of Tuesdays With Lazerbeak! Hope you’re all surviving this brutal winter and enjoying the first week of March. Spring is coming, I can feel it. I’ve got some exciting stuff to talk about to help us beat the winter doldrums together, so let’s get right to it. Last week Dessa debuted her first new studio single since the release of Chime last February. It’s called “Grade School Games” and that’s the rad artwork below courtesy of our old friend and original Doomtree co-founder MK Larada. 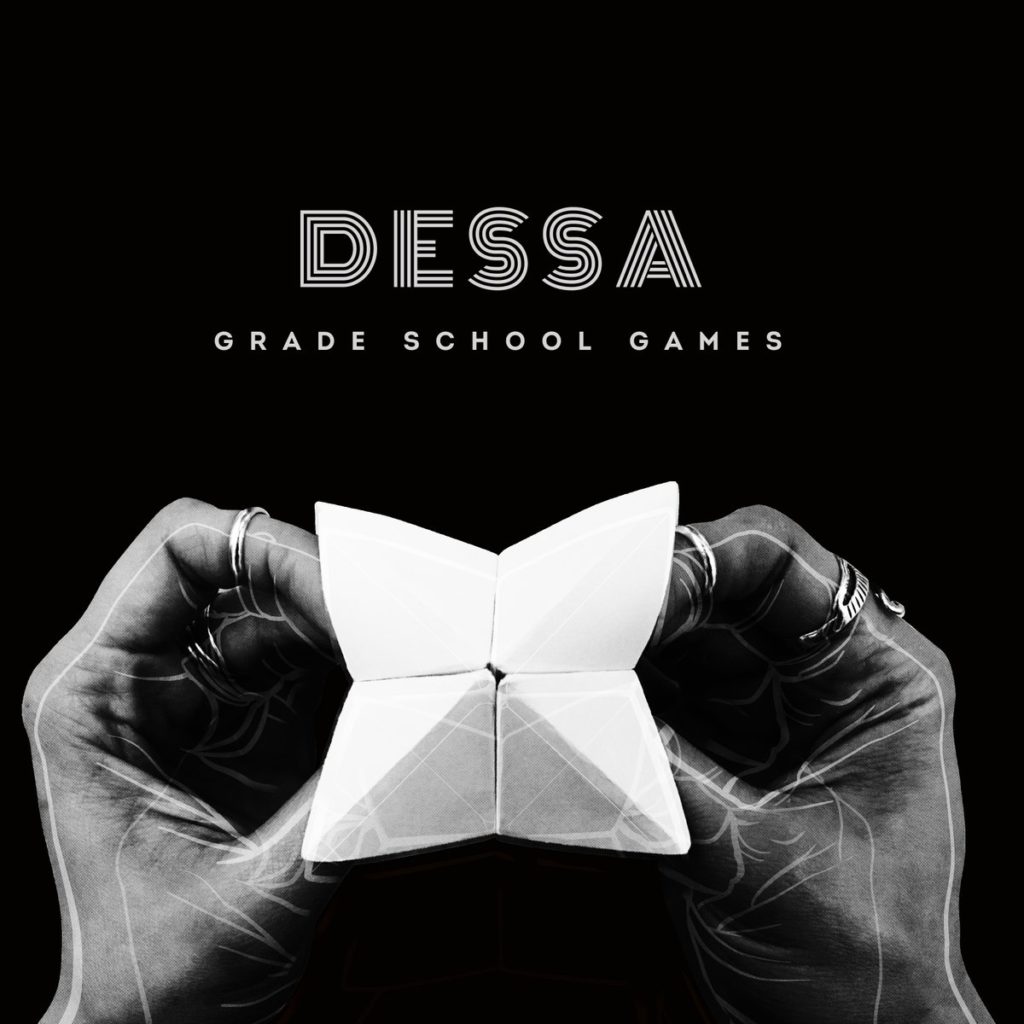 The song was produced once again by the #TRIPLETHREAT of Dessa, Andy Thompson, and Lazerbeak (ME!), and I couldn’t be more proud of how it turned out. Check out the track below or anywhere you listen to music these days right HERE, and please help us spread the word far and wide. Thanks for the support!

On top of the new song, Dessa also has a bunch of freshly announced tour dates as well. Check out the full Spring run below and grab your tickets HERE. 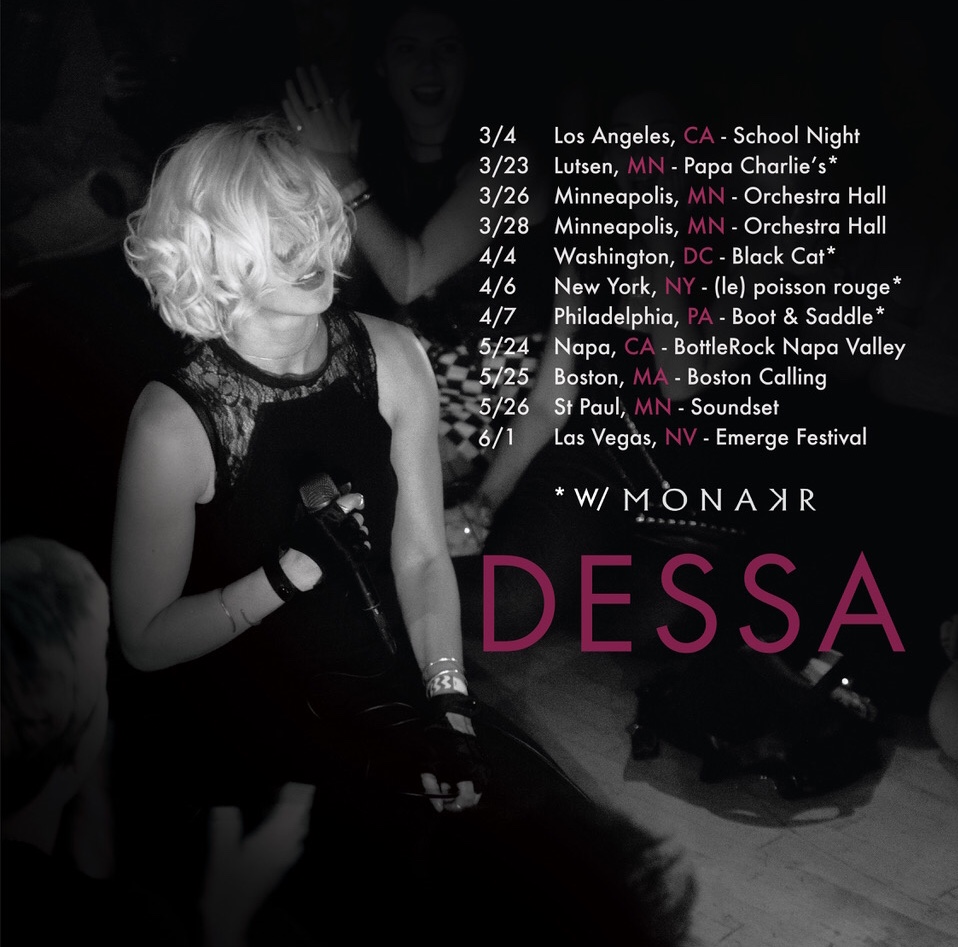 Andy Thompson just finished a killer orchestral rendition of this new “Grade School Games” song and I’m super pumped to announce that Dessa will be performing it at Orchestra Hall on March 26th and March 28th for her live album recording with the glorious Minnesota Orchestra. There are quite literally only a handful of tickets remaining to each of these shows, so grab them now HERE and be a part of history! 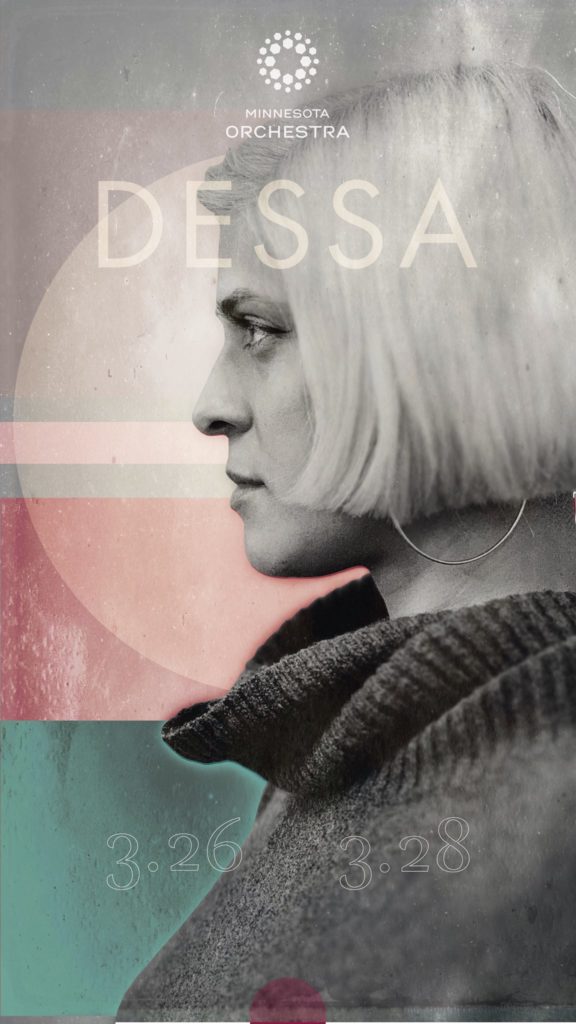 It is officially the first Tuesday of the month, which means it’s time for the third episode of the Tuesdays With Lazerbeak podcast. OH YEAH BABY!!! 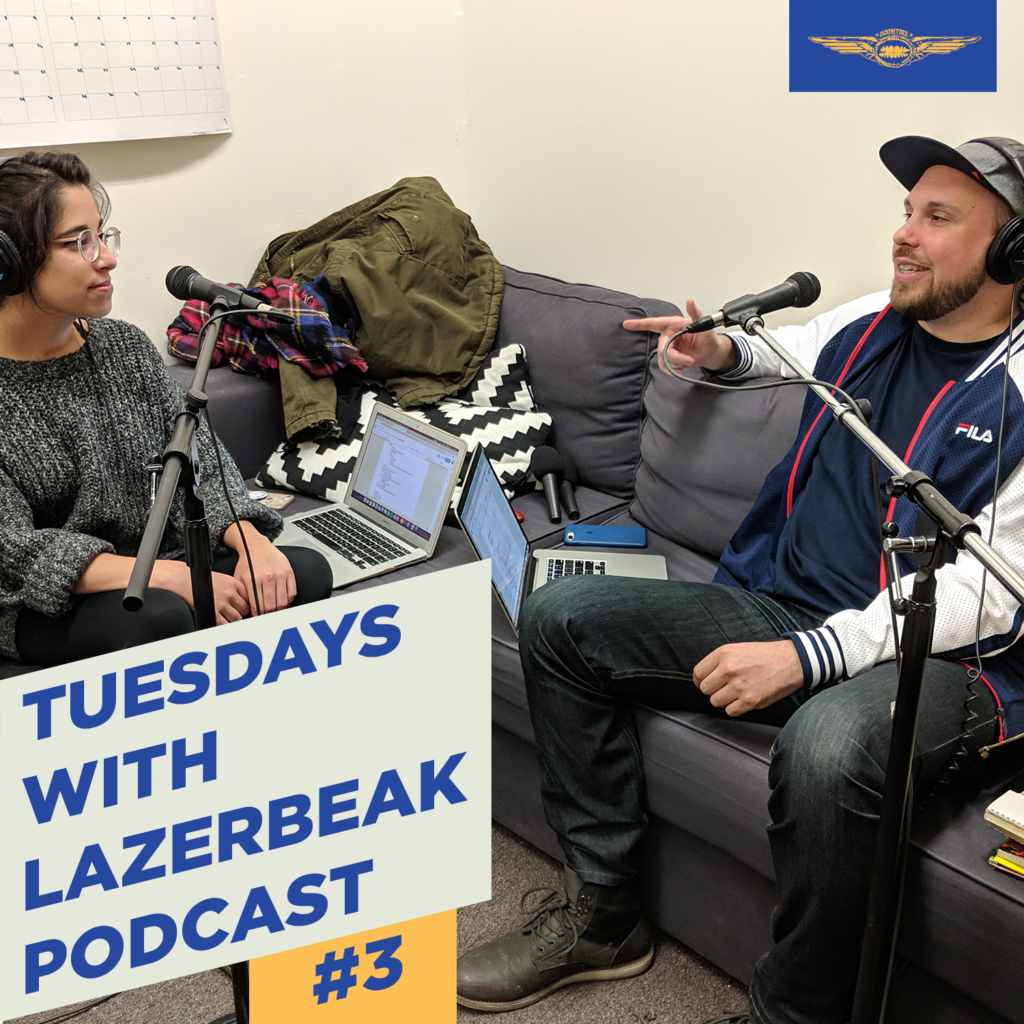 This month Jeyca and I take a super deep dive into my new solo album Luther. This is the definitive interview on all things creation, inspiration, artistic process, mental health, family, and everything in between that led up to the big release last month. We actually taped this episode two nights before the album came out, so you’re getting me at my most vulnerable and fragile state hahaha. Be gentle. And if you’re more interested in our hot takes on the Grammys and Maroon 5’s halftime performance, we’ve got you covered there too. Check out the hour-long episode on the Soundcloud player below or anywhere you get your podcasts from right HERE. As always, massive shouts to my co-host and podcast producer Jeyca Maldonado for making this possible, and to engineer extraordinaire Tim Nelson for making it sound so pro. Aaaaaaaaand big thanks to YOU for listening and sharing. Hope you enjoy it!

Speaking of Luther (SEGUE STREAK!), all of this leads us to the extremely special one-time-only album release party this Friday, March 8th at the beautiful Parkway Theater in South Minneapolis. It’s going to be a really crazy night encompassing my entire musical career and if you’re wondering if I’m freaking out a little bit about it the answer is a resounding YES. I’ll be performing songs from Luther live, breaking down the beats in detail, talking with Jeyca about how it all came to be, and bringing out an outrageous amount of specials guests to perform songs from my discography. There will be performances by tons of Doomtree members, Shredders, Mixed Blood Majority, Sophia Eris, Bionik, Longshot, and Jeff Allen of The Plastic Constellations. Yes, we’re going to do a Plastic Constellations song live for all the old TPC! heads out there. It’s also looking quite likely that my kids will come out and perform a song with me (fingers crossed) and we’re going to be world premiering the unreleased music video for “Valley Low” from Luther on the big movie screen. I would absolutely love to see you there and if you could help me get the word out and invite your Minnesota friends I would be forever grateful. Tickets are available right HERE.

And in case you wanted to see just how beautiful the newly renovated Parkway Theater looks, here it is. Gonna be a wild one!

ONE WEEK until my #LUTHER album release show at the beautifully renovated @theparkwaympls. Gonna do a music video premiere on the big screen and bring out lots of special guests like @mclongshot @sophiaeris @bionikmusic @jeffallen @jeyca97 @crescentmoon612 @joehortonfix and plenty of @doomtree and @shredddders members to run through the hits. Tickets are limited and you can grab yours in my bio link. Thank you!

BAM! That does it for the Doomtree-related news this week, which means it is once again time for another round of Bonus Jams. Seems like the music industry is finally starting to wake up a bit now that it’s March and pop’s heavy hitters are beginning to heat up. I could not be more excited about the double single that Carly Rae Jepsen just unleashed along with the news that a new album is coming in 2019. She is an absolute staple at the Mader household. One of the only artists that all five of us can agree on every time. This “No Drug Like Me” song is an absolute smash.

Solange rocked the world last week when she surprise released her new When I Get Home album after an incredible teaser rollout. I still haven’t had time to really sit with the whole thing yet, but this “Almeda” track has me super excited.

Really getting into these new Tayla Parx singles as of late. She’s done a ton of writing for Ariana Grande in the past and you can definitely hear Tayla’s influence on the pop world in this new “Slow Dancing” song. Plus she’s been announced as the main support on the upcoming Lizzo US tour, which seems like an absolutely perfect fit. Excited to hear more.

I’m totally in love with the new 2 Chainz album. Feels like one of the most cohesive projects he’s ever released, not to mention this guy is in his 40s and still completely crushing it. Here’s a new music video for one of the standout songs “Money In The Way.”

Pumped to hear more new music from TDE’s latest signee Zacari. This “Midas Touch” loosie is nice and I’m hoping it means he’s got a full-length on the way later this year.

Just found out Delicate Steve released a new album this month! Holy god I can’t wait to check this thing out. One of my favs and an absolute guitar legend. Check out lead single “Freedom” below.

I couldn’t be happier to announce that Psalm One is BACK. Last week she dropped this great new song “Non-Binary” with the homies Sophia Eris, Angel Davanport, and ShowYouSuck, and I have it on good authority that she’s back in the studio working on her next solo project. YES.

astralblak just dropped a video for my favorite song off of last year’s Seeds album (one of my Top 10 releases of 2018 – SO GOOD). To me, they are the future of music and one of the best bands out there, period. This video rules too. Enjoy!

Big shouts to Longshot who just announced a huge headlining Spring tour all across the US. AP Counterfeit will be out as main support for all the dates and the two decided to get together on a new track to celebrate. Check out “Against All Odds” below and check out all the tour dates right HERE.

My friend Yung Wes just dropped a great new single in anticipation of his upcoming project dropping very soon. Check out “LA” below and get familiar.

Big congrats to Kara Laudon on the release of her new single “Piece of the Fire.” All the songs she’s been dropping as of late have been excellent, and this one is no exception. Highly recommended.

Kara Laudon – “Piece of the Fire”

And lastly here’s a semi-recent song from songwriter Erik Koskinen. I’m way late to this party, as his album came out back in 2017, but I got a chance to see him live last weekend at the Parkway and it was phenomenal. Instant fan. Check out the video for “Free Man” below.

BOOM! That’s it for this week’s Bonus Jams. As always, you can add my Bonus Jams to your Spotify playlists and take this music with you everywhere you go. I update it every Tuesday morning with the latest heat and there’s currently 500 songs for you to flip through from the past year. You can subscribe to the playlist right HERE.

I hope you all have a truly awesome week. I’ve been a total stress ball preparing for this release show on Friday, but I’m really excited to see a bunch of you out at the Parkway on the 8th. It would mean a lot to me if you could spread the word this week about the show so we can pack that thing in. Thanks so much and I’ll see you next week for another round of Tuesdays With Lazerbeak!