MAAAAN that was a fun weekend.  The Doomtree Blowout V was an insane success, in my opinion the best one yet.  A gigantic amount of thanks goes out to every single person that was a part of last Saturday’s festivities.  To paraphrase Stef: I love my rap crew, I love my friends and family, and I love our fans.  Such a good time.  If you wanna see some pictures of the night, Vita.mn posted up a photo gallery with some pretty sweet shots courtesy of Leslie Plesser.  Check em out here: Vita.mn Blowout V Photo Gallery 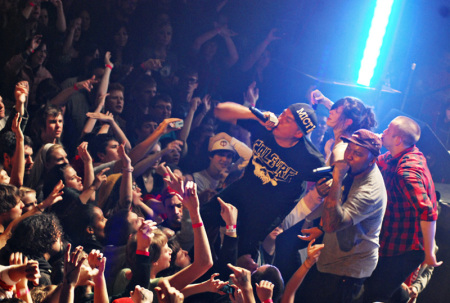 There were so many highlights, but one of my favorite moments of the night was finally being able to premiere the brand new music video to “Prizefight” off of myself and Mike Mictlan’s Hand Over Fist album, directed by Greg Hubacek.  So many people have been working tirelessly for such a long time on this thing, and I couldn’t be more proud of it….

I’m gonna post the video below, but what you really need to do is go to doomtree.net/prizefight and check out the actual interactive website that accompanies this thing.  Four different awesome remixes were made of the track, and you can switch simultaneously between the original and the remixes while you watch the video.  Pretty slick stuff.  This song has become somewhat of a rally cry/mission statement for us, and I am just so thrilled that it finally has some amazing visuals to accompany it.  Check it out!

The other big announcement is that Dessa will be releasing her first official full length album, “A Badly Broken Code,” on January 19th.  This album is a monster!  A lot more on that very soon.  Now that the Blowout is over we are about to kick into high gear on this project and I can’t wait for people to hear it.  Other than that, False Hopes XV is available digitally now at iTunes as well as directly from us at doomtree.bandcamp.com.  And tomorrow we’ll be dropping off a ton of new merch that we premiered at the Blowout to the Doomtree Webstore.  Doomtree crew album on vinyl, Paper Tiger 7″, limited edition poster, shirts, hoodies, etc.  Big things.

OK, enough shop talk.  I’m still stinging a little from the brutal Vikings loss on Sunday night and the excessive brew crushing that followed it.  So here are a few Bonus Jams intended to erase those painful memories and cheer everybody up.

The Rolling Stones – “Fool To Cry”

You would have to be a fool to cry about a still dominant 10-2 record.  Go Vikes!  Also, this song played a fairly prominent roll in a scene from the movie “Beautiful Girls” starring Matt Dillon, which just so happened to be filmed right here in Minnesota.  Double bonus!  The breakdown at the end where he just starts yelling “Ay Yay Yay” is the best.

I know this song has been out for a minute, but bear with me.  I’ve never been an enormous fan of the Clipse, but this track is pretty much undeniable.  Been bumping the new album in the Camry quite a bit, and it is SOLID (really feeling the beats this time around too).  Plus this chorus repeatedly mentions eating chicken and fries at Popeye’s, which is one of my favorite things to do on this earth.

It doesn’t get much better than this.  One of the greatest songs ever made, and it never fails to cheer me up immensely after a rough Sunday of football (same goes for “If It Isn’t Love”).  Man do I love New Edition.  Legendz!!!

There you have it.  Three incredible Bonus Jams.  Next week I’m gonna attempt to rank my top 5 favorite albums of the decade.  Yikes, that sounds impossible.  Hope you have a great week.  One more huge thank you to everyone that made it out to the Blowout, especially the folks that flew in from around the country/world.  Much love.