Man this is shaping up to be the best week ever!  Dessa’s new album comes out today, Friday is her big show, then TPC! reunion show Saturday, and Vikings/Saints game on Sunday.  It’s almost too much awesomeness to deal with in just one week!!!  So I figured I’d elaborate a little more on each one of these events in the following segment:

“The Top Three Insanely Awesome Things Of The Week”

It has truly been a long time coming and I am just so thrilled to see this album get launched out into the world today.  An unmeasurable amount of sweat and time and effort has gone into this project, and this is definitely Doomtree’s biggest push behind a record to date.  We just finished shooting another music video for it over the weekend, which puts us up to 4 videos shot (crazy!).  Paper Tiger and MK Larada did a great job handling most of the production and Dessa really knocked it out the park, plus the artwork that MK pulled off for it is totally nutz.  Seriously buy this album, it should be available on iTunes today as well.  Friday is gonna be the release party at the Fine Line with Dessa, Cecil, Jeremy Messersmith, and I’m sure more than a few Doomtree cameos.  Not to be missed if you live anywhere close to the Twin Cities.  Below is the video for “Dixon’s Girl” if you haven’t seen it yet, which just so happened to be in the top 5 most viewed videos on Myspace this week.  Big things.

If you didn’t know, The Plastic Constellations is a band I’ve played in since the 8th grade, long before ambitions of being a rap producer.  A couple years ago we decided to go on an “indefinite hiatus” after about twelve years of recording records, touring the country, and drinking way too many Sparks together.  We got asked to play this 10 year anniversary show though for a great local label in town called Modern Radio and couldn’t resist.  The dudes in TPC! have been my best friends for over half of my life now, and the last few weeks of practicing again have ruled (even though I managed to forget everything about playing guitar).  So come see the original LEGENDZ of the game.  It’s an all ages show at the Cedar Cultural Center on Saturday the 23rd.  Vampire Hands, STNNNG, and Skoal Kodiak are also playing.    Below is a little video Modern Radio made to promote the show, and below that is a picture of me and Jeff on Sunday celebrating the Viking victory with nachos and sunglasses.  Not really sure what that was all about, but how can you go wrong with nacho cheese? (that recipe is coming to Tuesdays With Lazerbeak in just a matter of weeks): 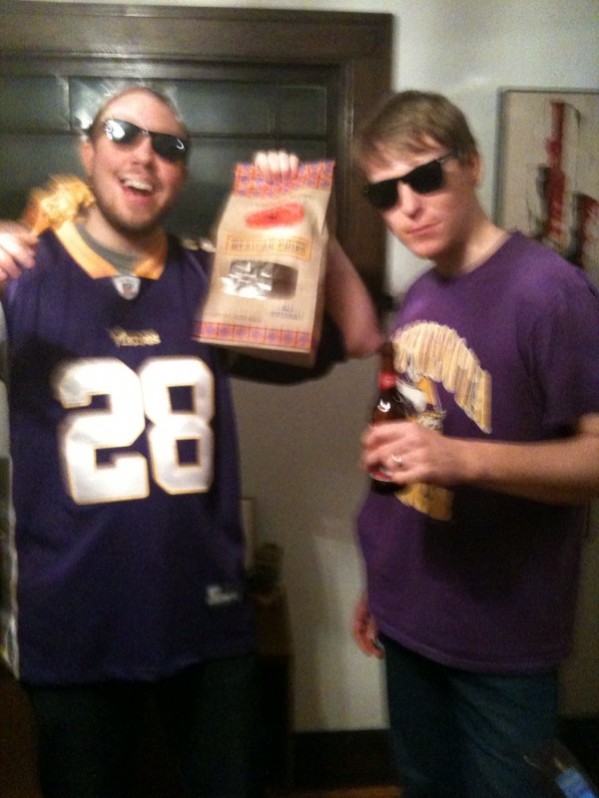 Holy lord, last Sunday was absolute mayhem at my place after the Vikings rolled over the Cowboys (as witnessed by the weird picture above).  What an incredible game, so so proud.  Now this coming Sunday just one team stands in our way of getting to the Superbowl.  Sunday at 5:20 it is going down!!!  If we can play like we did against the Cowboys I really don’t think the Saints can stop us.  Below is a picture of me and my dog Della before the game.  My mom actually made the Vikings sweatshirt that she is wearing.  Love you Mom.  GO VIKES!!! 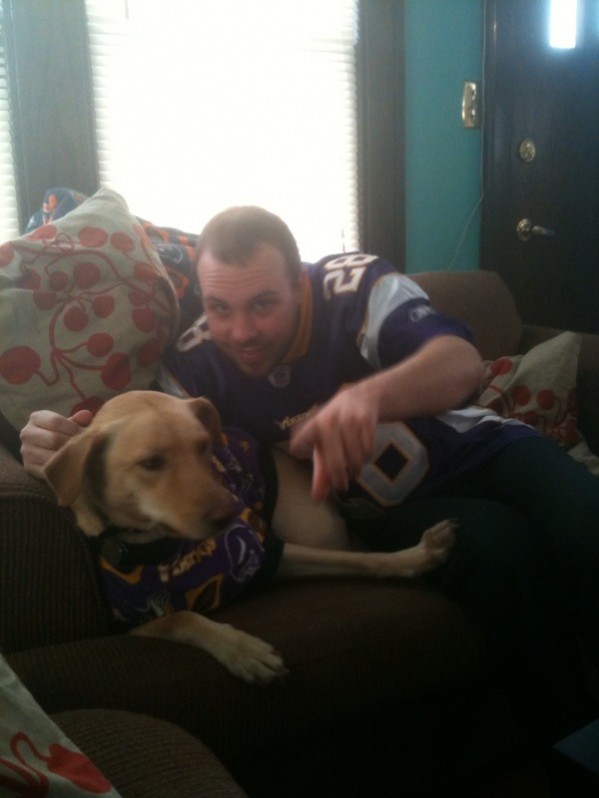 Wow, what a crazy week.  SO pumped.  I hope your week is filled with just as many insanely awesome things as well.  See you next Tuesday or maybe even earlier.