Man last week was pretty jam packed with awesomeness.  Paper’s album came out last Tuesday and I want to thank everyone so much for supporting the record.  Response has been great so far and it’s sweet to see so many people amped up about instrumental music.  I have to agree that it does truly slay.  In addition to the new release, last week was also Paper’s final week in Minneapolis for awhile.  He’s en route as we speak to New York with his lovely lady Diana to live out there for awhile and do it real big in the Big Apple (not to worry, he’ll still be just as involved, if not more so, in Doomtree from out there).  Coastal takeover.  Hopefully he’ll be hanging out with Jay at the 40/40 Club in no time.  We threw the two of them a little farewell send off party on Thursday over at Sims’ place and below is a hilarious picture i got of Papes.  Not quite sure what that face is for, but it cracks me up every time.  Best of luck out there guys, run that town. 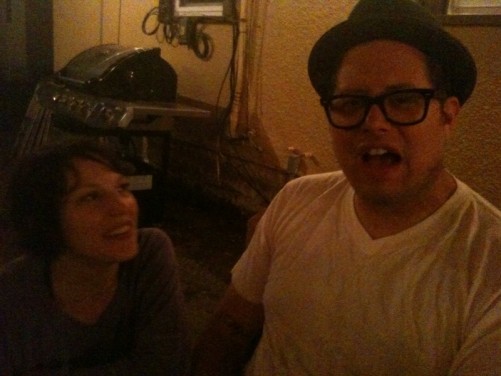 Wednesday we shot the last of the ten videos for the Legend Recognize Legend DVD that will come packaged with the album in September.  Holy lord we are so close to wrapping this whole thing up.  This one involved simulated tubing, fake snow, a bonfire, and a ton of masks made out of paper plates and feathers.  Oh and I got about as close as I may ever get to crowd surfing (but in a crazy island beach party kind of way, not a super lame arena rock kind of way).  Below are a few pictures I grabbed at the shoot.  Really excited about this one. 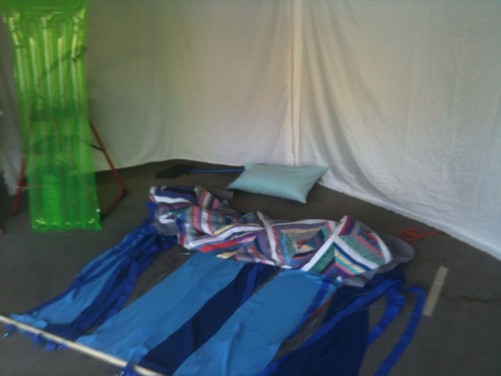 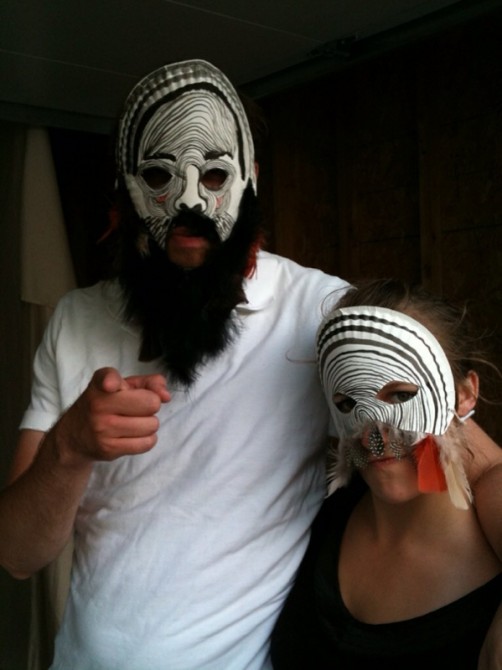 Oh and our intern extraordinaire, Ander, debuted his new Wings and Teeth flat top at the shoot too.  So sweet. 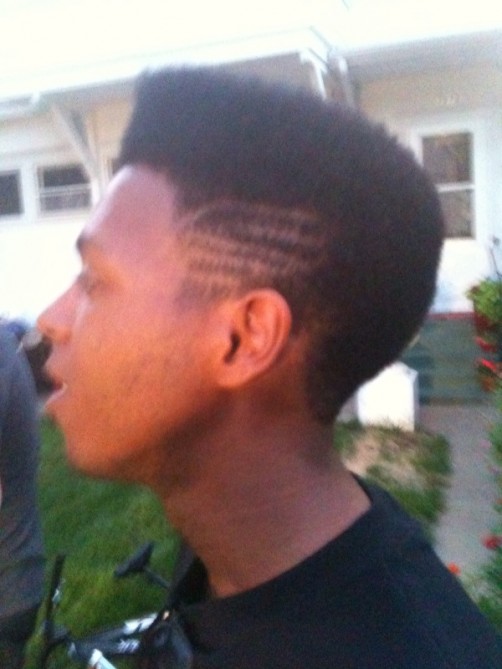 Less than two months away from when the album drops!  We should have preorder info and a first leaked song up in the next week or two if everything goes as planned.  I can’t wait!

Over the weekend the wifepiece and I went on a super awesome mini vacation with our dear friends MJ and Liz.  Sort of a Couples Retreat thing minus the tropical landscape, box office failure, and sub par Vince Vaughn jokes.  Originally we were gonna go to Duluth, but because of some insane phenomenon known simply as Tall Ships, we decided on Eau Claire, Wisconsin.  It was legendary.  We arrived on Friday and ended up staying at a Holiday Inn that had a Green Mill restaurant connected to it.  Hilarious only because between the four of us we have all worked at the Minneapolis Green Mill at some point or another for a combined total of over 30 years.  Can’t stay away I guess.  Having a hotel bar ruled though, I never realized how convenient those things are.  Saturday we drove out to Chippewa Falls to go tubing down the Chippewa River.  I’ve had quite a fascination with tubing for the last four years now, but have only ever gone down the Cannon River in Minnesota, which is super tame and only like 3 feet tall.  This was a completely different beast.  Look at this thing, it’s enormous!

I had gotten into the hotel bar a little too hard the night before and was feeling pretty queasy from all the rocking of the river by the time we had made it halfway.  What happened next I may never be able to live down: I totally puked on my tube.  For that I must apologize to the people of Chippewa Falls as well as Cam, MJ, and Liz who had to endure the incident since all our tubes were tied together.  Yikes man, really not a good look.  I was truly humbled by the river.  If only they had cameras placed along the ride to document your trip like they do on rollercoasters, that could be a serious YouTube instant classic.  I did feel instantly better though and we eventually made our way back to shore without being swallowed whole by the water, despite being caught in what the locals referred to as a Swirling Eddie as we tried to steer ourselves to the beach.  It really is a crazy feeling trying to swim as hard as you possibly can while not actually moving an inch.

We spent Sunday hitting up a ton of flea markets and thrift shops and then decided to reward ourselves by having a picnic in a nearby park.  Pretty uneventful stuff except for the fact that when we rolled up to said park we saw about 30 grown adults dressed up as knights, chasing each other around with foam battle axes and swords!!!  I had watched a fascinating documentary last year on this kind of activity, which is known simply as LARPing (live action role playing), but had never been lucky enough to see it in person.  SO INTENSE!  These people ran around for hours shouting out commands and strategically planning attacks, all while launching crazy home made foam arrows at one another.  This has to beat the hell out of playing Dungeons and Dragons in your mom’s basement!  We tried to get up close to take pictures but were met with a lot of resistance from the LARPers (they do not mess around).  MJ was able to grab a couple pics though as we were driving off: a few of the battlefield and one of a license plate that simply read WARHAMR.  Warhammer dude.  I love it.  Don’t forget to check MJ’s hilarious Total Waste Of Time tumblr page too: totalwastoftime.tumblr.com.  Always good for a laugh. 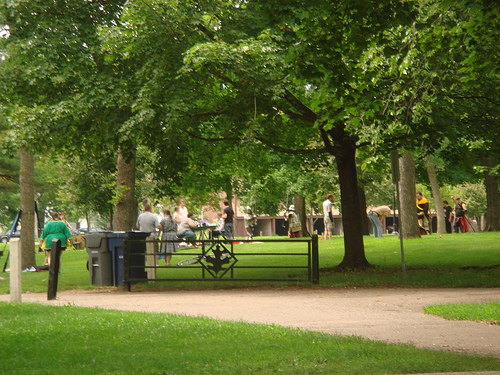 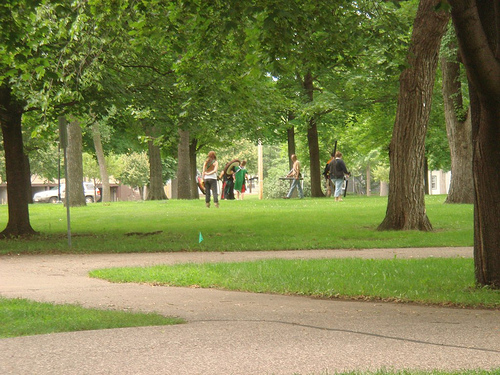 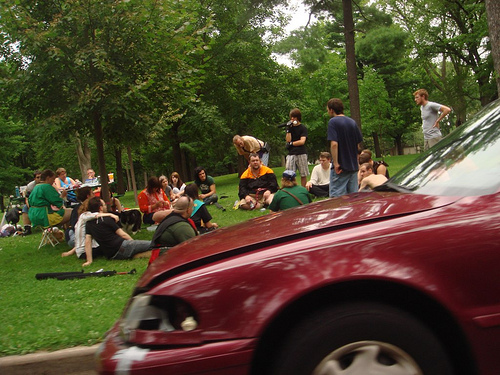 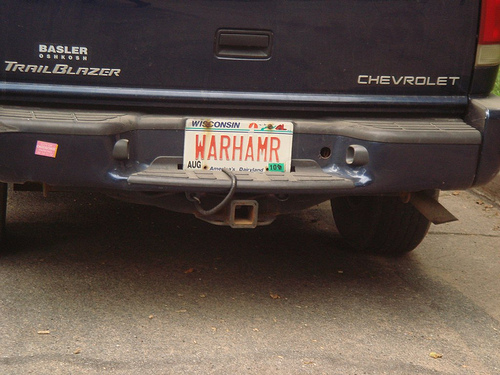 Anyways, it was a wonderful and relaxing trip and I gotta give it up to the good old Eau C.  We did it real big, and now it’s time to get back to work putting the final finishing touches on these music videos.  Below I’ve included a couple Bonus Jams.  The first is a very bizarre but amazing song/spoken word rant by Yelawolf that just leaked (pretty sure it’s older and was probably never supposed to be heard by the public).  It starts out pretty slow but if you hang in there you will be rewarded.  In one of the last lines of the song Yela poses the very rational yet thought provoking question “Ooooh have you ever in your long legged life seen an alien catfish?”  Now I do have long legs, so I’m not sure if that’s why that line sticks out to me so much, but I have to say that my answer as of right now is no.  I haven’t yet seen an alien catfish.  Sounds cool though, and this song is definitely my new jam.  Below that is a cool little video interview that YRB Magazine did with my guy F. Stokes.  It features a new beat of mine in the background that will appear on the upcoming full length of ours, and gives you a good idea of what this man is all about.  If you’re not too familiar with Stokes, check out the EP him and I put out last year called Death of a Handsome Bride (buy it HERE).  He literally is the truth.

OK, I hope you have a great week.  See you next Tuesday big duns.