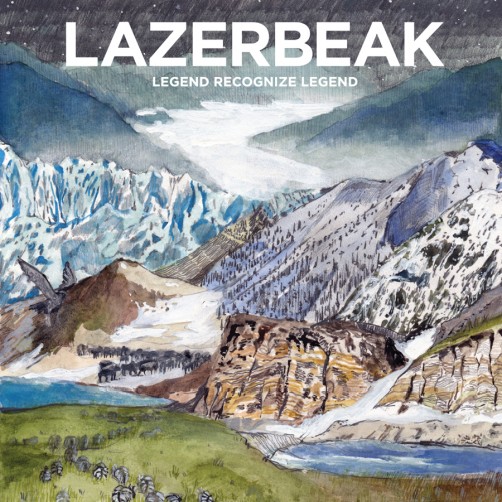 Bam!  Here we go: it’s finally time to announce the details of my first ever solo album, Legend Recognize Legend, and I don’t remember the last time in my long legged life that I was this excited.  That’s the album cover image above.  We’re putting it out on September 28th, but you can pre-order the album HERE right now and get a ton of crazy free stuff in return.  I’m talking autographed CD, bonus DVD with a different music video for each of the ten tracks, and access to a special live password-protected webcast (where I just very well may give out several secrets on how to craft the ultimate Lava Banger, as well as preview tracks off the album and show you how they were made in a non lame way).  Plus, everyone that pre-orders will get entered into our first ever Doomtree Blowout drawing where you can win backstage passes to the Blowout in December, a night in a swank downtown hotel, and some serious cash towards your travel fare or bar tab.  The first 300 pre-orders will also receive a signed poster as well.  What a simply outrageous and glorious deal!  You should probably get down with this.

I’m aware that by going under the name Lazerbeak for this album many people will be expecting either an instrumental hip hop record or a big huge collabo album with a ton of different rappers on every track.  While I certainly won’t be ruling either of those ideas out in the near future, I do need to mention that this one is a pretty different beast in comparison to all that stuff.  Prepare yourself: it’s poppy as hell and I sing on almost every track.  We’ve decided to leak a song off the album to give you an idea of what to expect with this thing and hopefully ease your mind from the fear that I have ventured into some sort of cringe inducing Sarah McLachlan singer/songwriter abyss (no disrespect, there was absolutely a brief moment in time that “Building A Mystery” was kind of my secret jam).  Anyways, this song below is called “Salt and Sea,” and it features my wonderful wifepiece Brittany singing back-ups with me throughout.  It takes place in the middle of the ocean, mainly because the middle of the ocean is a mesmerizing/mysterious/terrifying/awesome place that I pretty much never stop thinking about.  You can download the track for free below.  I really truly hope you are into it, because I am personally supremely pumped about the whole thing.

If this isn’t quite your thing, not to worry, I haven’t completely lost my edge yet.  As soon as this Sims full length drops in early 2011 you will unequivocally know that the Lava Banger is still very much alive and well.  I feel strongly though that Legend Recognize Legend is a really important album, all jokes aside.  I may even be a little too close to it right now, seeing as the last year and a half of my life has been spent in the constant pursuit of making this thing a complete tour de force on all fronts: music, vocals, lyrics, videos, artwork, and on and on.  I have an insanely long list of incredible friends and family to thank for their dedication, support, and back breaking help in the effort of bringing this whole project to life.  I’ll spare you any more of the mushy stuff for the time being though.  Save all that for another post.  Suffice to say that it brings me great joy to introduce Legend Recognize Legend to you, from one legend to another, and I sincerely hope you like it (and buy it… HERE, haha).

On an equally glorious level, the entire Doomtree crew will be embarking on a full fledged mammoth national tour in November!  First time ever that all seven of us have done a whole tour like this together, and I am predicting incredible things.  Over three hours of music every night, including solo sets from each member and rowdy crew sets as well.  Man this is gonna rule so hard!  Check out the dates below and make sure to check back often for updates and ticket pre-sale information.

My apologies for the strictly Doomtree shop talky blog post this week.  All this news is simply too exciting to contain.  I’ll be back next week though with some cool new lists and thoughts on various things that rule.  In the meantime, if you haven’t already, make sure to check out the insane new Kanye West video/painting snippet for the song “Power.”  Say what you will about the guy, but what artist out there do you know on this level that still puts every ounce of creativity and passion into their craft like this man?  This video is my JAM.  I’ve also attached the Marco Brambilla directed “Civilization” piece underneath it, from which the “Power” video idea came from.  Pretty mind blowing stuff.

This is gonna be a great week.  I’ll see you next Tuesday.