Most of Doomtree had some variety of respiratory infection for the past week. In the van at night, chesty coughs rose from every direction in the darkness.  Lazerbeak (ever the optimist) was convinced that his rising fever was evidence that his body was beating the infection. Somehow this line of reasoning took hold, and as our conditions worsened, we became surer and surer that we were getting better. Despite this obvious failure of rationality, we all seem to be on the mend.

As I write, we’re driving from L.A. to Austin. It’s a 22-hour haul and we’ve decided to do it in one go. Paper is behind the wheel, Lazerbeak is The Navigator and DJ, and most of the guys are just starting to slump over in their seats and doze off.

I’m particularly looking forward to the Texas and New York dates on this tour because I’ll have family in the house. We’re playing the Red 7 in Austin and the Knitting Factory in Brooklyn. Via insistent text message, I’m trying to convince my little brother Max to sing with me at the Red 7. No definite commitment yet, we’ll see what a couple of beers might do to persuade him to get on stage.

In New York, we’ll be playing the day after Thanksgiving. In all likelihood, Doomtree will celebrate the holiday in a standing-room only fashion, with a dozen of our friends in a Brooklyn apartment,  eating food from plates, saucers, bowls, and cups. Which sounds exactly right. 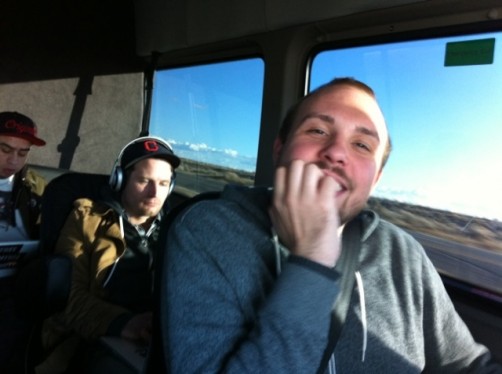