Well, my worst nightmares became reality Sunday night when the Green Bay Packers won the Superbowl after a halftime show that included the Black Eyed Peas performing songs originally recorded by Guns ‘N Roses and the Dirty Dancing soundtrack.  This can’t be life.  Oh well, no need to dwell on the negative.  I’ve got plenty of awesome things to get into in this week’s post.

Before I talk about anything else though, let me make one final reminder/plea/battle cry about the Bad Time Zoo pre-order.  This thing ends tomorrow (Wednesday 2/9) at midnight.  A huge enormous thank you to all the people that have already picked it up.  The support has been truly overwhelming.  You can go to the webstore HERE to grab it.  All orders include a signed CD, BTZ boxcutter, two bonus tracks, signed poster, and access to a private webcast with Sims and I that goes down this Thursday night (2/10) at 8:00pm CST.  We’ll be answering questions, performing unreleased material, hanging with our homies, and quite possibly even cooking.  If you order the deluxe version of the album, you’ll also receive the awesome green BTZ shirt (limited only to the pre-order) and a commemorative BTZ screenprinted box to store everything in.  BAM!  Below is the video showcasing the insanely sweet album artwork one last time.  Thanks for enduring the final sales pitch.

Now that that’s out of the way, allow me to blaze through a brief recap of our annual Superbowl party, which this year was host to a total of four crockpots. 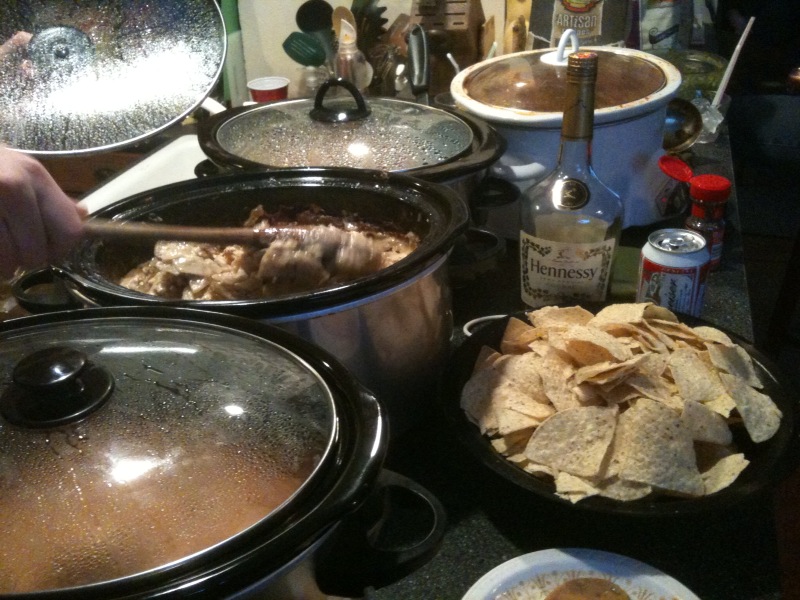 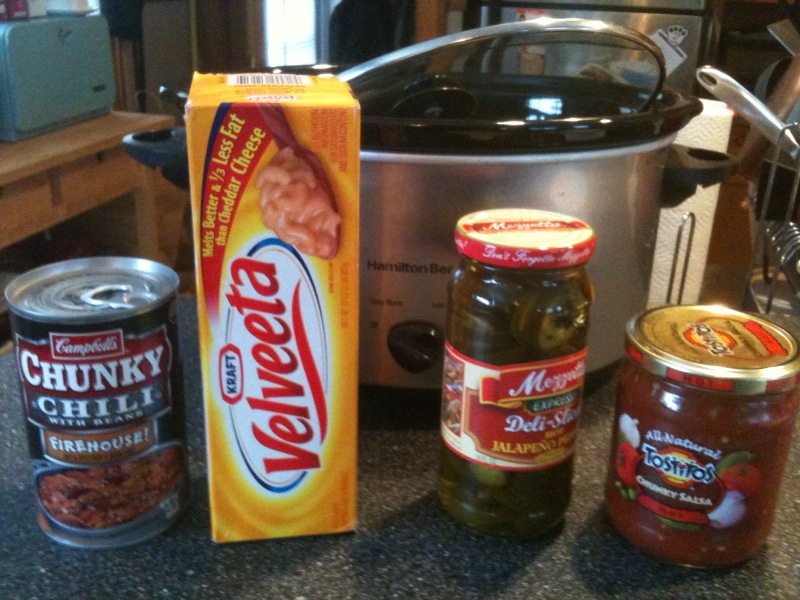 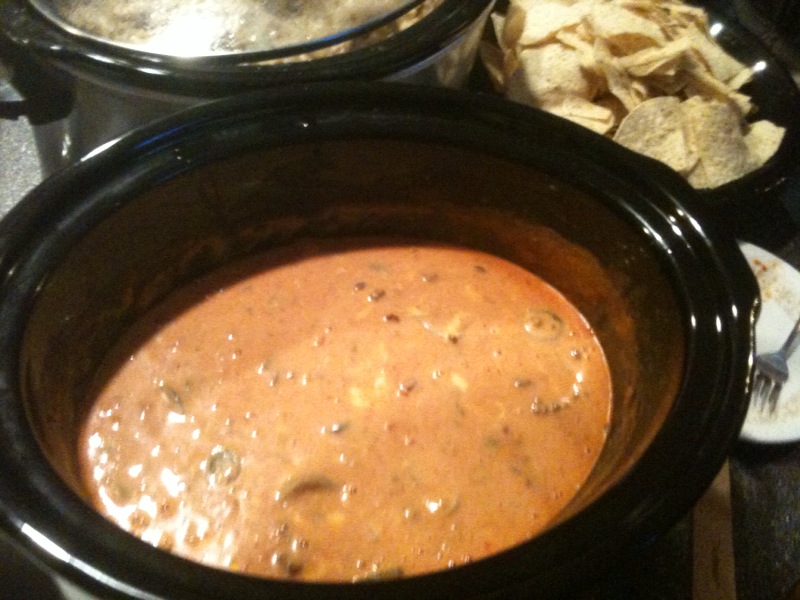 I’m realizing that all of the pictures of food that I took on my phone don’t really do any of it justice (you kinda had to be there), so I will spare you the rest of them.  Let’s just say it was a feast like no other.  These cookies that the Roons made still look incredible though.  Precision bakery at it’s finest. 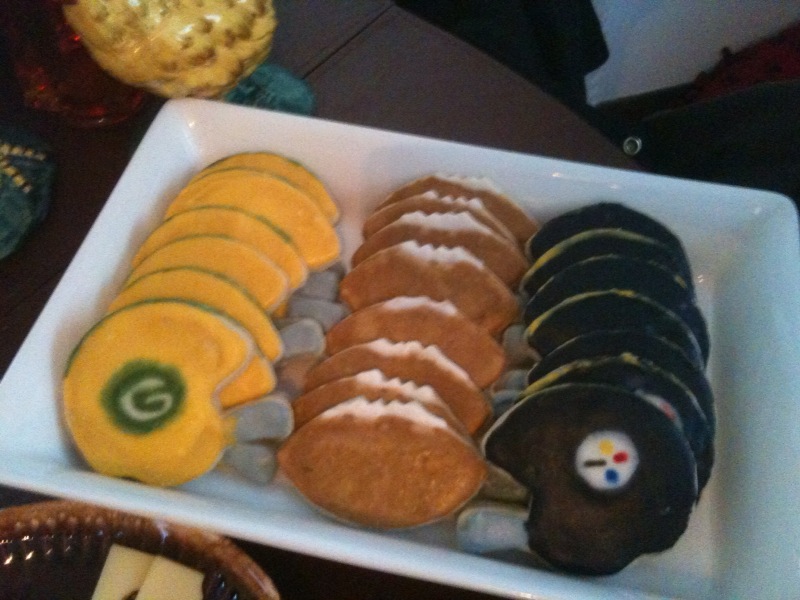 And here is Joe Mabbott (engineer extraordinaire) seconds after his beloved Packers sealed the deal, doing some sort of weird victorious Thor pose.  Wisconsin man, it’s a mystery to me. 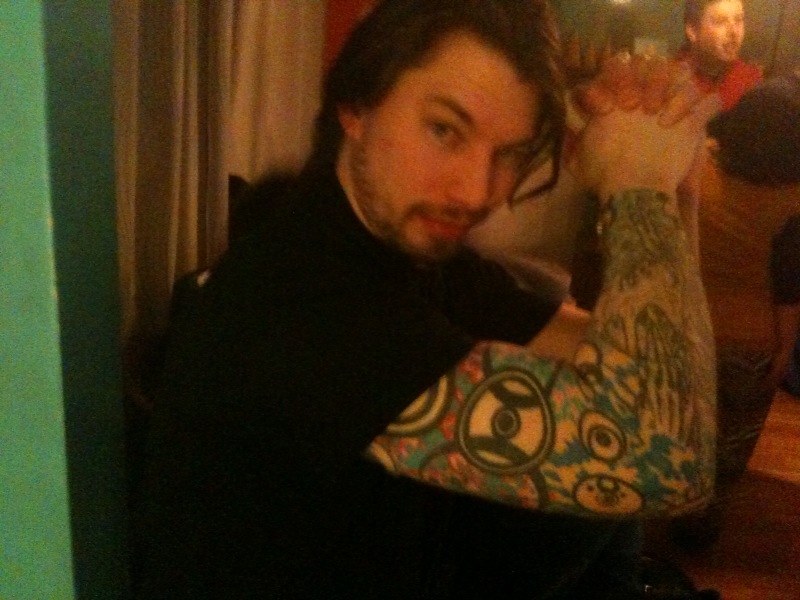 Speaking of Mabbott, Sims and I hit up his Hideaway Studios earlier in the week to put a few finishing touches on some show mixes and bonus tracks.  Just a week before we went in, Snoop Dogg had filmed a Pepsi Max commercial in there and happened to leave a bottle of Hennessy from the shoot behind.  To the victor go the spoils or something like that. 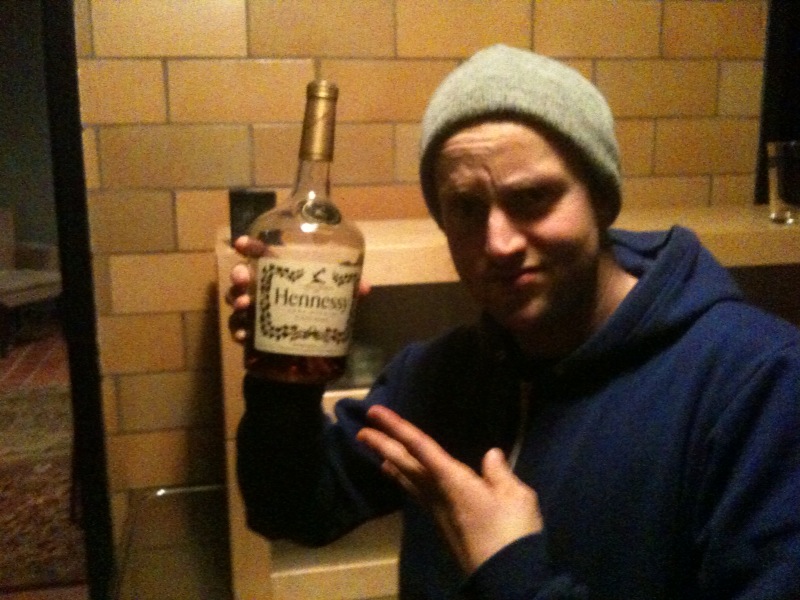 We also hit up Radio K’s Off The Record and the Current’s Local Show last week to play some songs live and promote the album.  Here’s Sims and the Off The Record crew.  Notice the Nas-like album pose my man is putting on them. 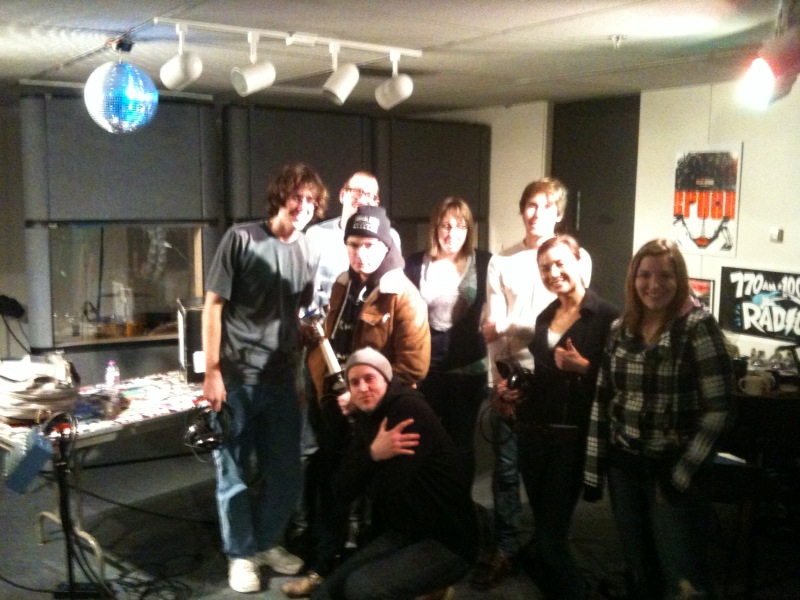 After the interview we got our picture taken to add to the wall of in studio guests.  Luckily there happened to be a couple great props laying around.  Just gearing up for All Star weekend’s slam dunk competition, no big deal. 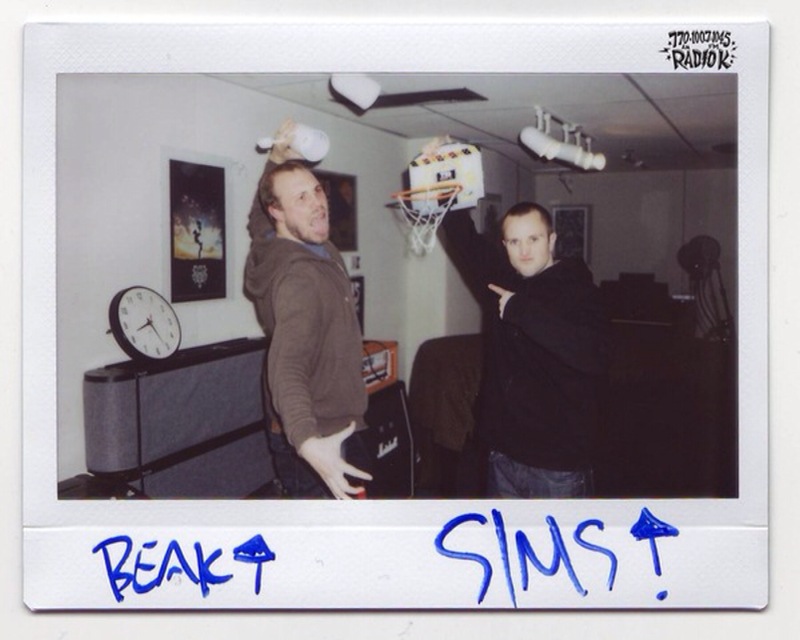 Oh man, speaking of dunks, my guy MJ put me onto this crazy interactive slam dunk interface.  It basically breaks down every NBA slam dunk contest (1984 to 2010) by dunk, year, and score, with videos clips from each and every dunk.  Truly amazing.  I watched this thing for hours the other day.  Completely forgot about Cedric Ceballos.  Click anywhere on the picture to go to this incredible page.

Last Tuesday Dessa and I went to a grade school in St. Paul to hang out with some kindergartners.  It was reading awareness month and their teacher was bringing in all sorts of people from the community to read different books to the students.  SO cool. 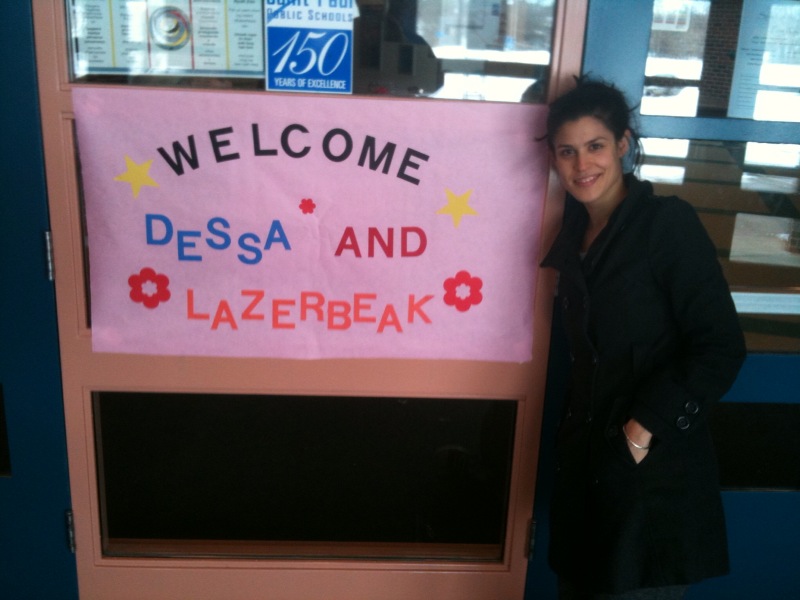 Here is Dessa reading Where The Wild Things Are to a captive audience.  I made the mistake of going the more obscure route with Don’t Take Your Snake For A Stroll (I know, questionable title) and didn’t get quite the same attentive smiling faces. 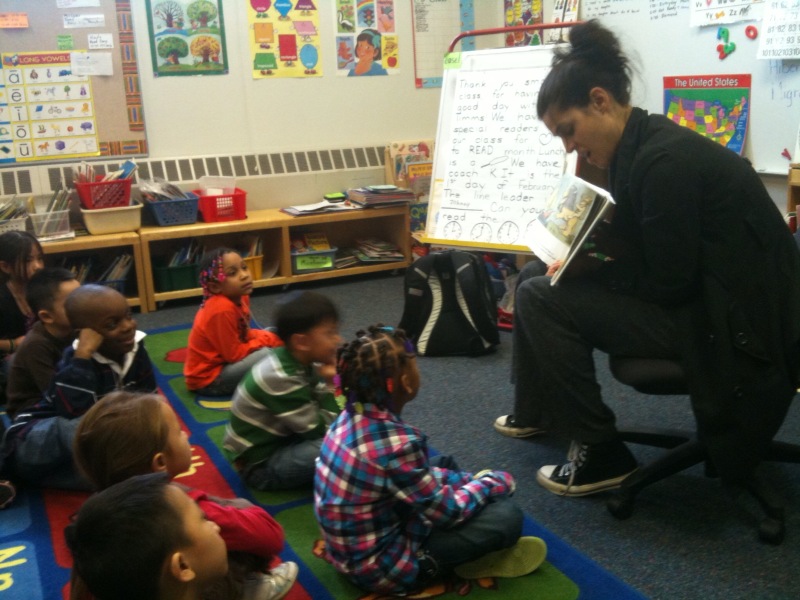 Highlight of the year possibly, those kids rule.  We got to play them a few child friendly tracks, and in return they serenaded us with the Head, Shoulders, Knees, Toes song.  Then at the end we got them all to throw their beaks up! 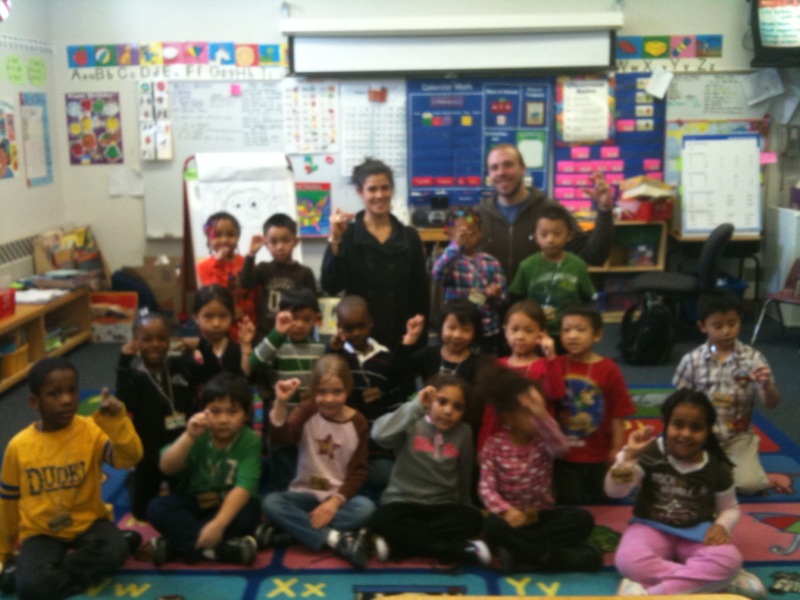 Well, that about does it.  Instead of doing the expected and dropping a few Bonus Video Jams on you, this week I’m gonna do you one better and drop  two incredibly awesome Bonus MIXTAPE Jams on you.  That’s right, two full albums for free.  The first comes from the Get Cryphy dudes (Plain Ole Bill, Jimmy2times, Last Word, and DJ Fundo) who will be celebrating their three year anniversary at First Ave this Friday night by playing only the most bangingest of rap songs of all time ever.  They’ve put together this crazy extensive megamix to give you an idea of what they’re working with.  BANGERZ.  Just click the picture to go to their page and download or stream it for free!  We are gonna be rolling super deep to First Ave to celebrate the wife’s birthday on Friday.  Hope to see a bunch of you there. 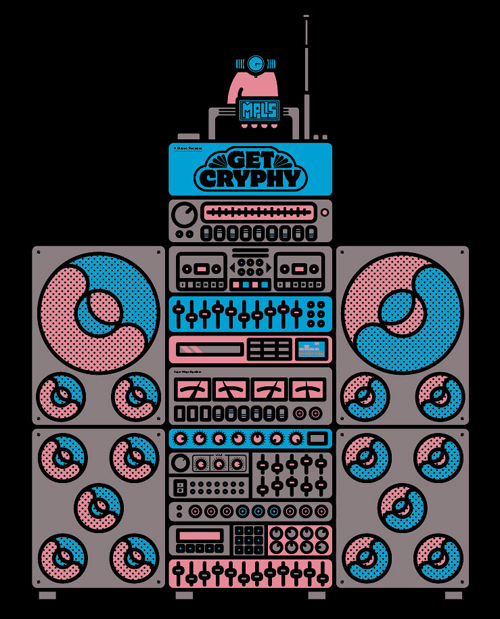 The second Bonus Mixtape Jam comes courtesy of the Money Making Jam Boys (best rap group name ever).  This is a new crew consisting of mostly Philly dudes spitting nothing but straight fire all over awesome old school breaks and samples.  Black Thought and Dice Raw from The Roots are in the group, along with STS, Truck North, and P.O.R.N.  I gotta admit, it was that Roots album Things Fall Apart that really got me back into hip hop full swing back in high school, so I may be just a tad biased/nostalgic, but I really haven’t been this excited about new rap music since Rawse dropped “MC Hammer”.  This stuff is just too hard.  Dice Raw has got to be one of the more underrated dudes out there.  I highly recommend you check this out.  It’s free!!!  Again, just click the cover to download or stream it.

OK, that concludes this week’s extra lengthy post.  Hopefully I’ll see you Thursday on the webcast or Friday at Cryphy.  One week til Bad Time Zoo drops!  I really can’t believe it’s almost here.  See you next Tuesday as we finally launch this bad boy out into the world.  Have a wonderful week.