Well February is over and that means only one more month of snow.  That much closer to tubing down a river with a cooler full of Mike’s Hard Raspberry (really, what more do I have to do to get sponsored?).  And please don’t get it twisted, it takes a mighty BAWSE to freely and confidently admit his love for a berry flavored malt beverage.  March also means it’s time to kick off the glorious Sims & Astronautalis tour.  Sims and Ander leave Thursday morning for Portland, Maine to meet up with Astro and his band.  This tour sounds like such a ridiculously good time.  If you’re out east or in a portion of the south or the midwest, make sure not to miss it.  Check out all the dates below, you can click on the image for more details:

You’ll notice there’s about a week long gap right in the middle of the tour.  That’s because Sims will be meeting up with the whole crew down in Austin, Texas for SXSW!!!  Doomtree is gonna be playing a ton of shows down there between the 16th and 20th.  We’ve actually got our own showcase this year too.  Way more info on all that next week.  Before we take off though we’re gonna be playing at First Ave for the big Gayngs SXSW send off show.  It all goes down this Sunday, and there are about 25 million bands (including Har Mar and Solid Gold) that will be playing throughout the night.  Check out the flyer for more details.  This is guaranteed to get outta hand. 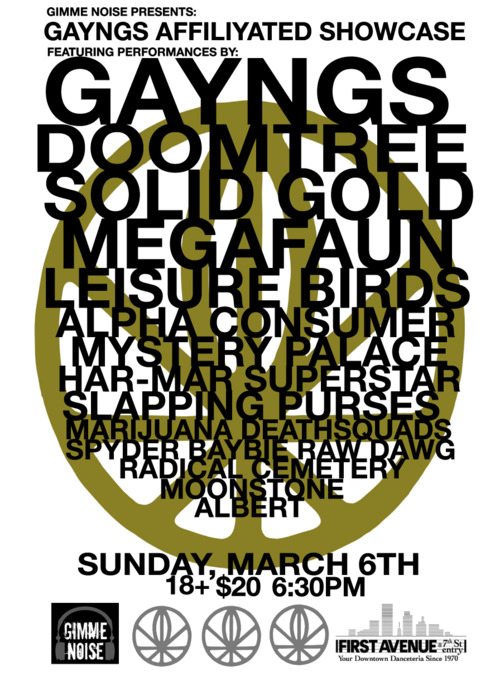 Absolute insanity.  There’s one more show I gotta mention quick.  I’m gonna be doing my first ever completely solo show this Friday at the 7th St. Entry opening up for Halloween, Alaska.  I’ve been toying with the idea of performing an entire set of Lava Bangerz, basically playing/blending a minute or two of as many instrumental heat knockers as I can fit into a 35 minute time span.  Expect a few songs off the solo record, but mostly just a ton of new beats that haven’t been released yet, as well as some classic jams from previous albums.  Really nervous about doing this for the first time, but it was part of my 2011 goals, so I gotta at least give it a shot, right?  If you’re nearby the Twin Cities, please come out and crush a few brews with me.  I’m gonna be a nervous wreck.  You can get tickets HERE.  Details below:

Once it’s all over you will definitely be able to find me across the way in the Record Room for Get Cryphy, dancing/drinking away all my worries.

I had such a good time dropping so many Bonus Jams on you last week, that I think I’m gonna just jump right back into it for the rest of the post.  Gonna start out with this dude from Raleigh, North Carolina named King Mez.  He just dropped a free  six song EP, entirely produced by Khrysis, titled The King’s Khrysis (see what they did there?).  It rules.  From what I understand, Mez is only 20 and just getting started.  Really excited to hear more from the young gunner.  Plus he’s from North Carolina, which has become my favorite place away from home these days.  Definitely check the EP out if you have a second, it is an absolute burner (if just for the intro track alone).  Click the cover to download.  I posted the video for “Nightmare” below as well (which appears to be made by the same people who did that F. Stokes “Jo Jo Dancer” video).

Finally, I’d like to start a new Bonus Jam segment entitled Bonus Classic Album Jams.  Every week I’ll be highlighting a different certified classic album (in my humble opinion of course) and talking a bit about it.  Gonna start the whole thing off with Black On Both Sides by the mighty Mos Def.

I know everybody already owns this one, but I hadn’t really listened to it all the way through in years, and was instantly brought back to my highschool years as an indie rock snob who was just starting to get back into hip hop.  This came out at the height of the Rawkus Records era, I remember they even dropped this album and Pharoahe Monch’s Infernal Affairs (another classic in my opinion) in the same month.  Musically and lyrically, this album is still mindblowing over a decade later.  The subject matter is still just as relevant as the day it came out, and the beats have an incredibly diverse and unique feel to them.  I remember hearing “Ms. Fat Booty” for the first time, recognizing the Aretha Franklin sample, and finally beginning to understand how people chopped up samples and created beats.  It definitely was a huge reason why I decided to try my hand at producing in the first place.  Stef and I used to drive all over the place with this on repeat, long before the idea of Doomtree was ever even conceived.  Great memories.  Anyways, if you own this album, pull it out again and give it a listen.  I had forgotten how ridiculously good it is from start to finish.  If you don’t own it, you’re gonna want to correct that mistake as soon as possible.  I’ve posted a few of my favorite tracks below.

Well, that concludes this first ever installment of Bonus Classic Album Jams.  As always, thanks for reading.  I hope you have an incredible week.  Maybe I’ll see a few of you out this Friday or Sunday night.  If not, next Tuesday for sure!