Aaaaand, we’re back.  SXSW 2011 is a wrap, and I gotta say, Doomtree kinda destroyed Austin this year.  Feeling like my crew is on a pretty supremely bawse level right now.  I’ll do my best to give you a brief recap of all the chaos that ensued over the last week.  Last Monday we rolled out of town in a chariot fit for kings.  I present to you the Cruise America top of the line 30 ft. rentable RV. 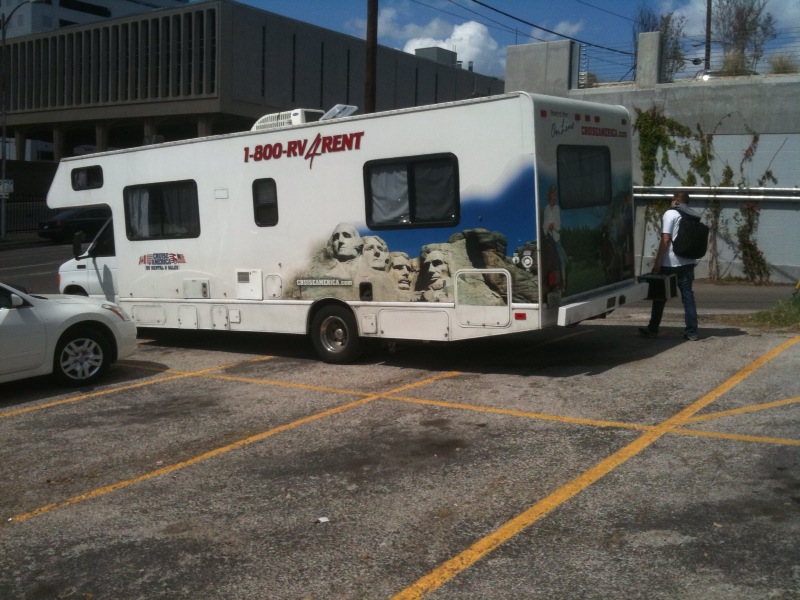 So sweet.  We wasted no time at all getting real comfortable in that thing. 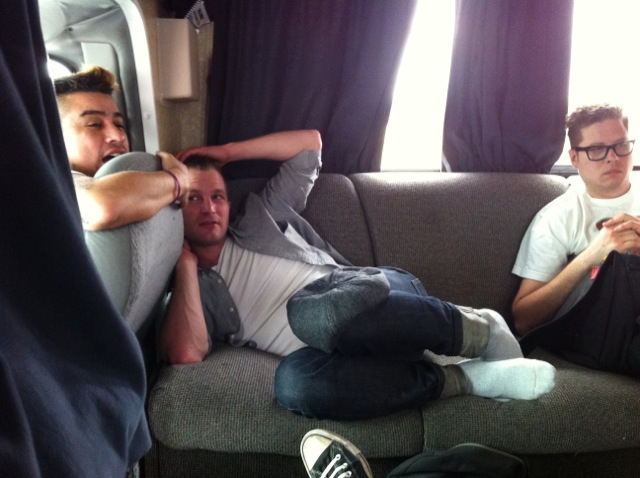 Even stopped at Wal Mart and grabbed a few posters to give it our own special touch.  Check out the Biebs making sure no one messes with Dessa and Stef. 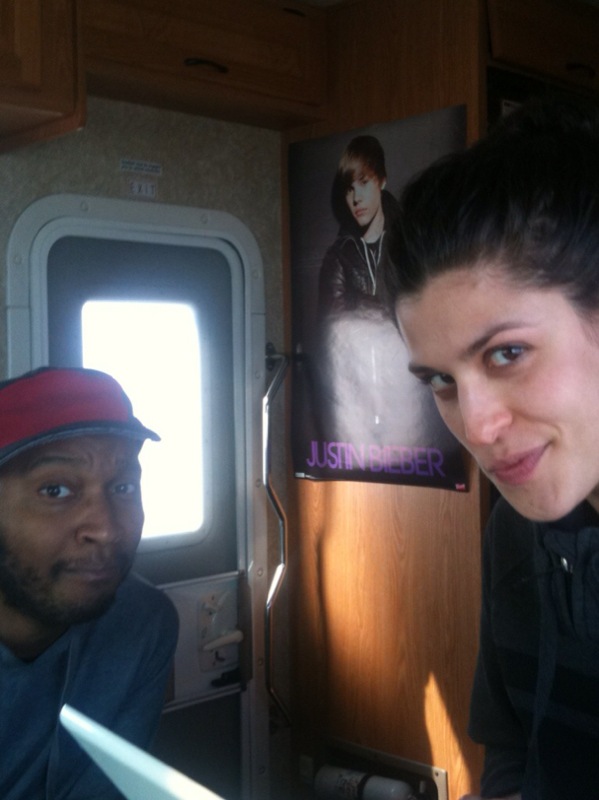 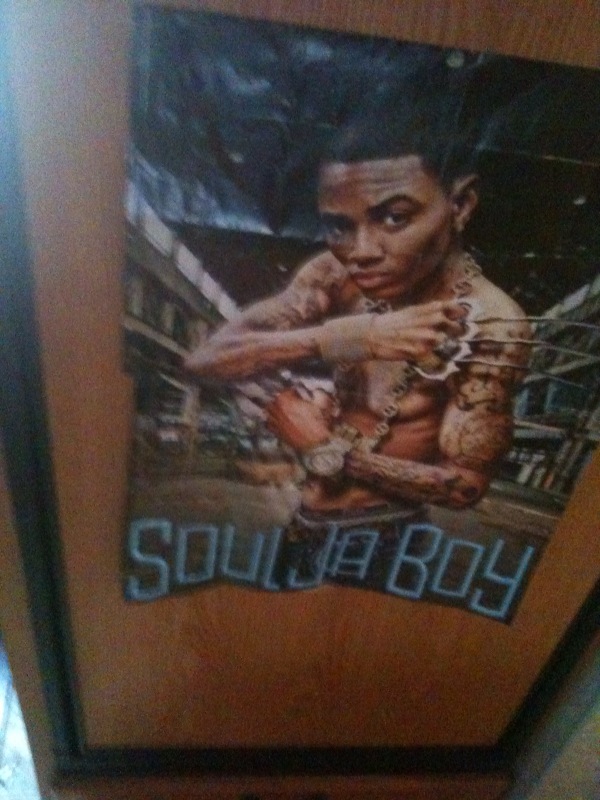 We rolled into Austin, TX late on Tuesday night and set up shop.  Here’s a picture the Star Tribune snapped as we pulled in to town.  That’s prime time advertising right there.  I’m gonna need to get to work on these sponsorships. 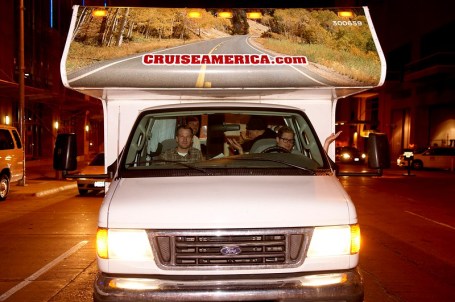 The rest of the trip is sort of a blur.  Between crew and solo shows, we played close to a dozen times between Wednesday and Saturday, and squeezed in meetings and interviews during the rest of the time.  Here was our initial schedule. 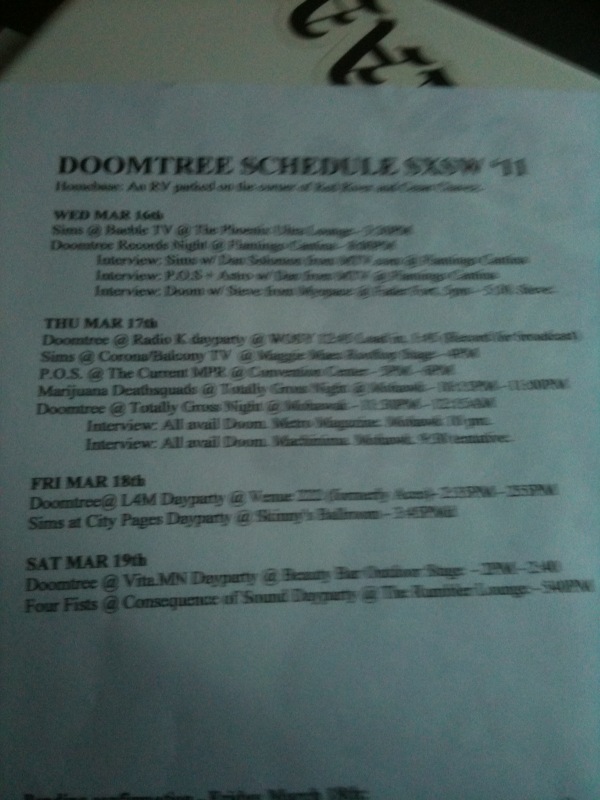 Lived off of street vendor food for the duration of the trip.  Seriously, an almost unfathomable amount of Best Wursts were consumed.  Luckily the amount of constant walking helped to offset any serious weight gain. 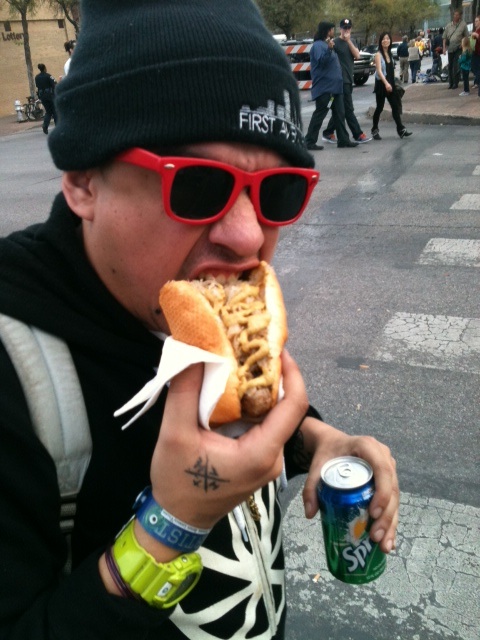 Wednesday night was our big label showcase at Flamingo Cantina.  We played from 8:00 til 2:00am pretty much straight through.  Exhausting, but one of the best nights ever.  Thanks to everyone that came out (especially our MPLS homies).  There was a line around the block to get in the entire night! 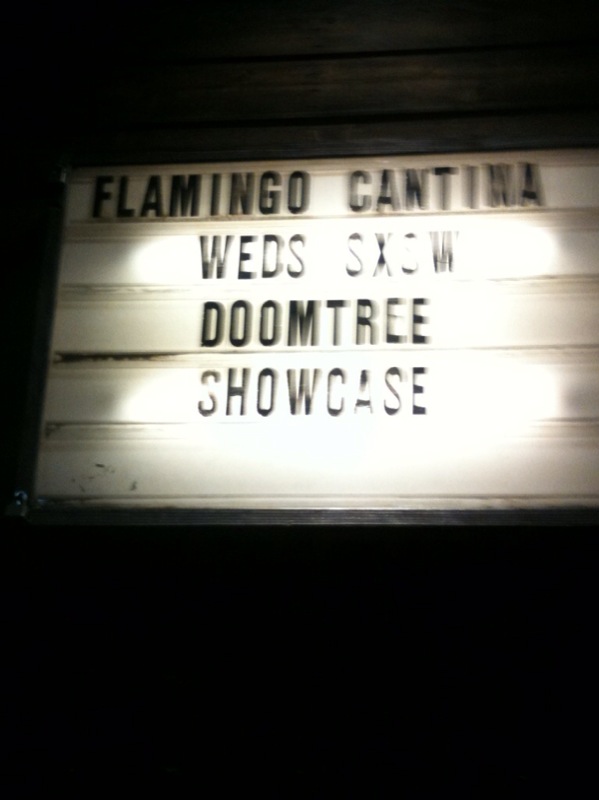 Thursday night was the GAYNGS showcase at Mohawk, and one of my favorite nights in forever.  So many friends under one roof.  Didn’t get a ton of pictures at all, but I have to say that I couldn’t have been more proud of our hometown that night. Every single band brought it so hard.  Felt on top of the world.  Gayngs live is like no other.  Strange words like “spellbinding” and “transcendent” even come to mind.

The next few days were a bit less hectic.  We played day shows here and there and got to catch up with friends from out of town.  Got to catch the Dickies sponsored Gayngs show on Friday. 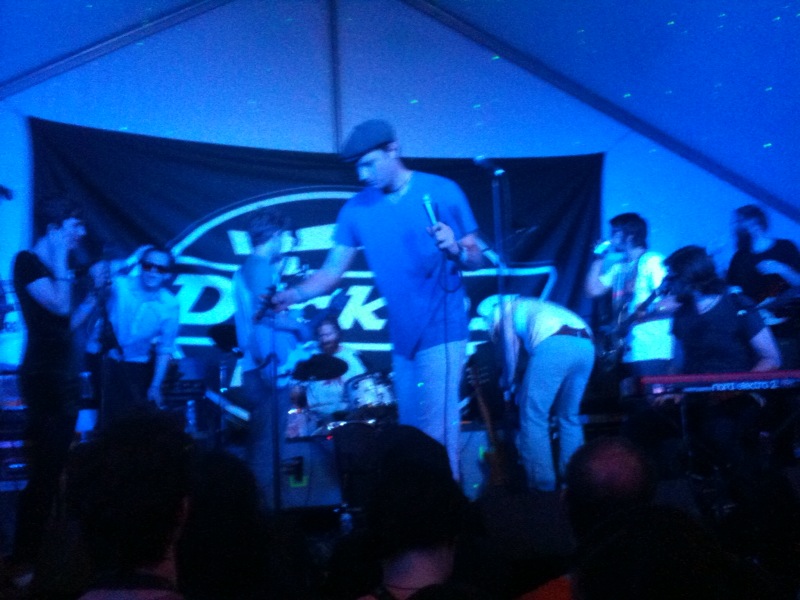 Dickies must’ve broken these guys off with a bunch of free stuff.  Here’s Har Mar rocking some pretty fresh overalls the next day. 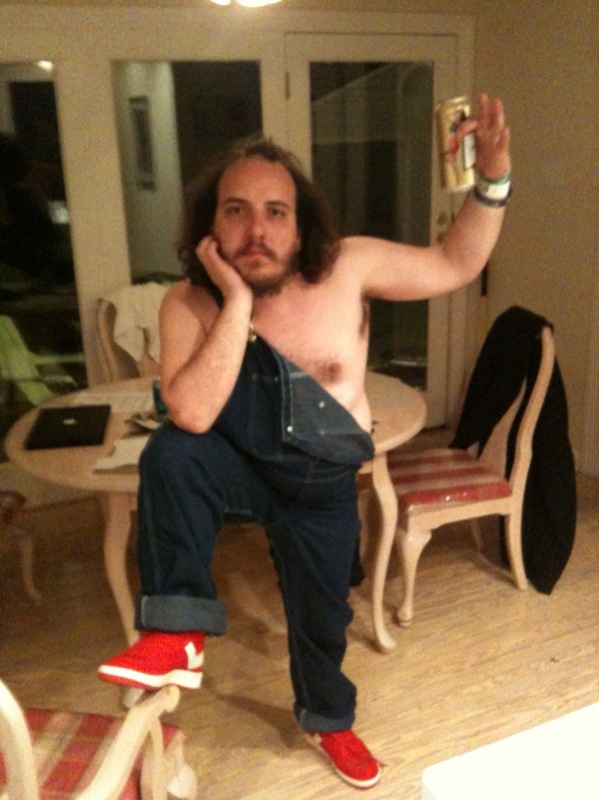 And here’s a few random other pictures for what it’s worth.

Word of advice: Always point at the camera.  It’s the only way they will ever know who they’re dealing with. 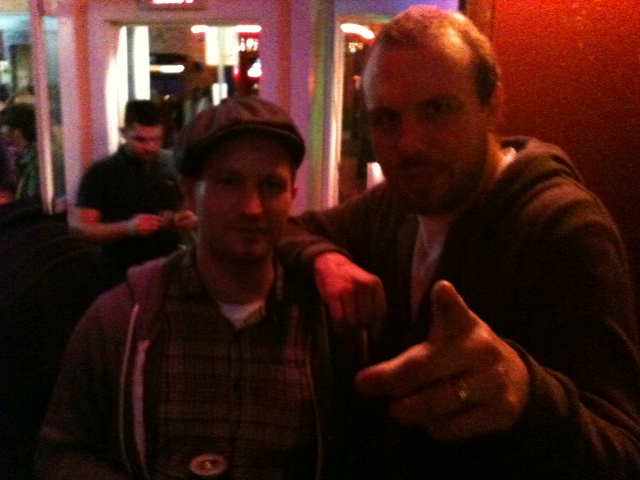 A couple of shirtless dudes holding it down outside the RV.  We were posted up in three parking spots on 8th and Trinity the entire time. 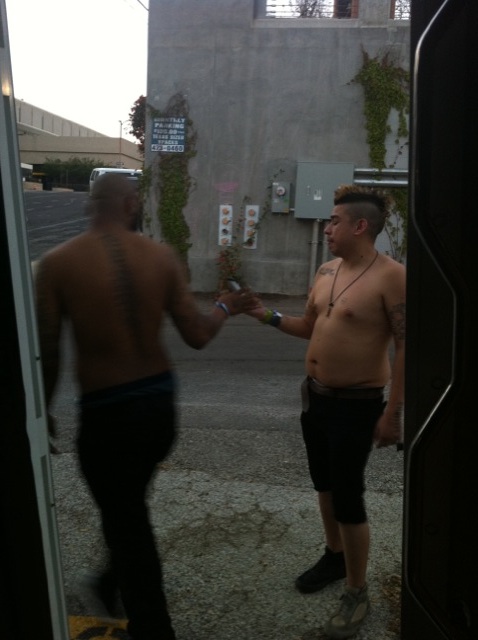 Catching our collective breath before the showcase. 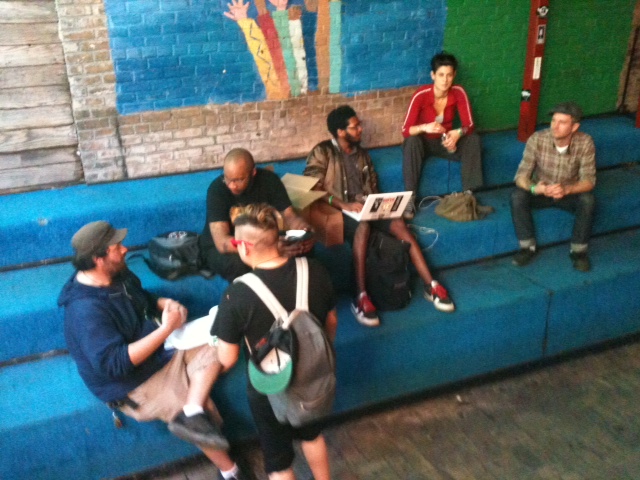 Dessa at a truckstop auditioning for the role of one of the nihilists from the Big Lebowski.  After ridiculously long drives, trying on the stuff they sell at truck stops will always be hilarious no matter what.  Even if the clerk behind the counter wants to absolutely murder you. 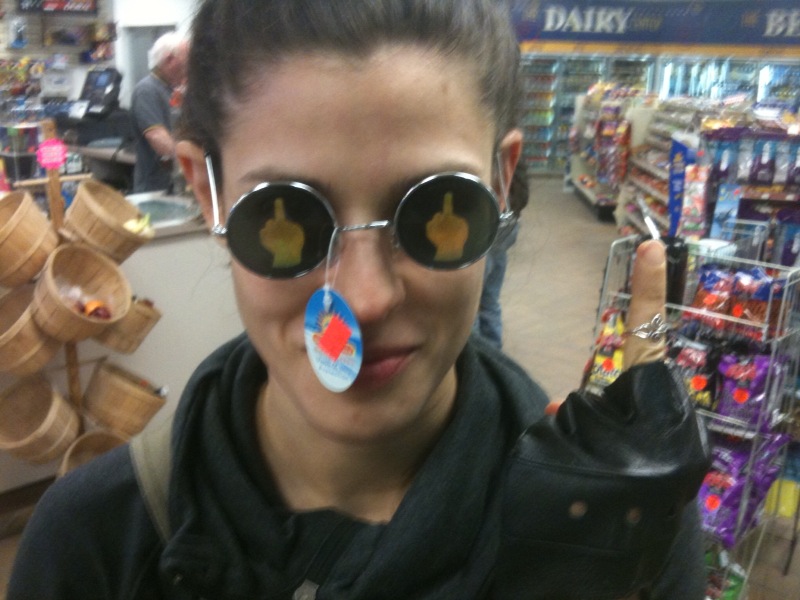 At one point we attempted to create Soulja Bieber in the RV by cutting out the Biebs eyes and putting them on Soulja Boy. 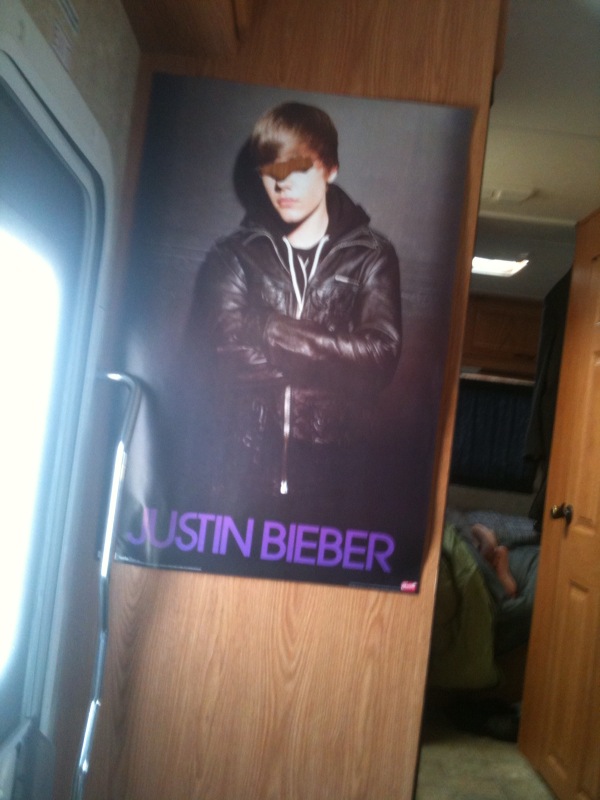 It ended up looking way sweeter on Cecil though.  It give me great pride to present to you child star Cecil Bieber. 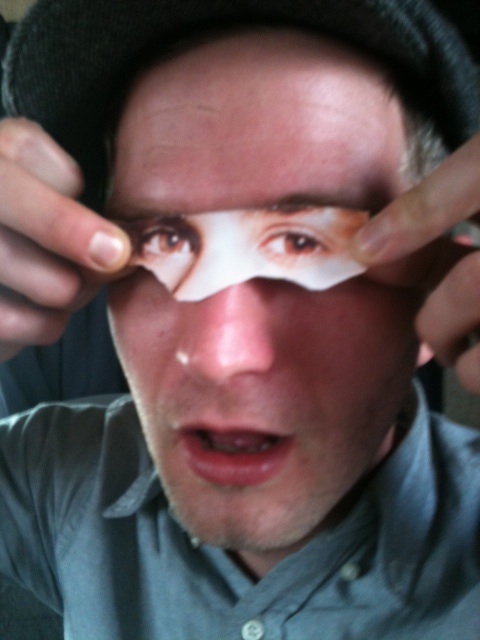 Like I said, the week went by in a blur and I didn’t get as many pictures as I wanted to.  Dan from MPLS.TV made an awesome video of the Doomtree and Solid Gold showcases though, if you want a good idea of what it was like down there.

All in all, this trip ended up being way sweeter and more productive than I had initially imagined.  Got to hang with a ton of great people, played some awesome shows, (drank one million free beers out of cans), and had the honor of representing Minnesota on a national level.  Not bad at all. 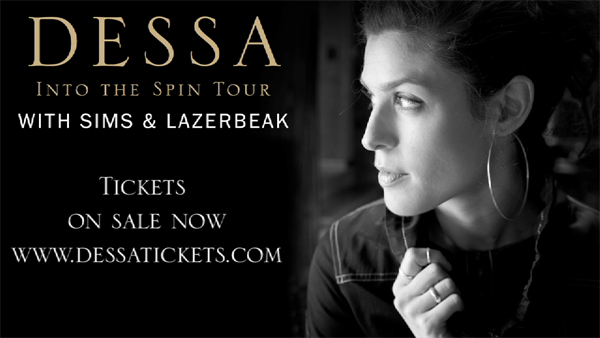 Another glorious thing that happened during SXSW is that the Into The Spin Tour got announced.  Dessa is going out West on her very first headlining tour at the end of April, and Sims and myself are coming along to fill in the main support slot!  This is going to truly rule so hard.  Check out the dates below, and click the banner to buy tickets early.

In conjunction with the tour announcement, Dessa also just dropped her latest video for the (appropriately titled) track “Into The Spin” off of A Badly Broken Code.  Check out your boy holding it down on the alto sax at the end.  Directed yet again by the untouchable and undeniable Isaac Gale.

Really looking forward to seeing a bunch of you out on this tour.  What a great way to kick off springtime.

Unfortunately I’m gonna have to end this post on a Bonus Jam somber note.  The one completely awful thing that happened while we were down in Texas was that Nate Dogg passed away.  I knew over the last few years he had experienced his fair share of health issues, but it seemed like he always ended up pulling through like a champ.  So saddened to know he’s gone for real this time.

Luckily he left behind an insanely impressive and extensive body of work.  And not just cameos and hooks.  His G-Funk Classics Vol. 1 & 2 solo album from back in the late 90’s still holds up to this day.  I highly recommend checking that one out.  And that 213 record got seriously slept on in my opinion.  Dude destroyed on every single track!  On a selfish note, it sucks to know that a Mike Mictlan/Nate Dogg collabo will never go down.  Mike and I have talked about that forever (see “Young Hunger” off Hand Over Fist for an idea of where that could of gone).  Anyways, the man had an absolutely incredible voice and brought a ton of joy to a ton of people.  Just think of how many of us there are in this world that can recite every single word from “Regulate” verbatim.  There is not a karaoke night in all of America where that song doesn’t get dropped at least once.

I don’t even know where to start with these Bonus Jams, so I’ll just throw out a couple classics that pop into my head right away.  Rest in peace to another true legend.  The Camry will be bumping nothing but “The Hardest Man In Town” all week in his honor.  See you next Tuesday.