Hey there.  Welcome back to the last Tuesdays With Lazerbeak before Dessa, Sims, and I take off on the Into The Spin Tour.  We leave on Saturday and make our way out West over the next three or four weeks.  Really looking forward to this one.  Not only is it Dessa’s first headlining tour, but she’s also bringing out her band on this run and they absolutely slay.  It’s been very cool to watch how they’ve been able to turn a lot of the old songs into brand new arrangements that still hold up to the original rap beats while expanding the sound.  I’ll be backing up Sims and playing beats out live for his set.  Expect nothing but the most mammoth of Lava Bangerz, as we’ll be playing a ton of new stuff off of Bad Time Zoo.  Having played a show or two with Sims in town since he’s been back from his East Coast run, I gotta say that dude is in prime form live.  Make sure to check out all of the dates/cop tickets right HERE.  I’ll do my best to post tour pics up here on Tuesdays while we’re gone. 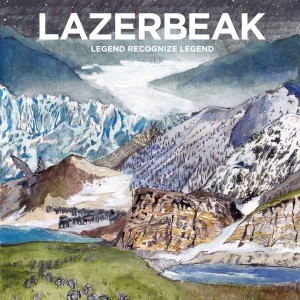 I wanted to briefly highlight Legend Recognize Legend since it has now been out in the world for a little over six months.  It’s probably been about that long since I actually listened to the whole thing too, but I still have incredibly fond memories of the entire year or two that went into creating that beast.  The physical CD (available at the webstore HERE) has always come with a bonus DVD that includes a music video for every song.  We’ve recently decided to offer a digital version over on our Bandcamp page that comes with the 10 music videos as well.  The videos are all iTunes formatted so they should work with phones/pods/pads/tabs/what have you.  Pretty cool option.  You can check it out right HERE.  Just think of it as a one time membership fee to the Tuesdays With Lazerbeak “blogsperience” if you haven’t grabbed it yet.  Below are a couple of the videos if you missed them back when they dropped.

Dessa and I recently did an interview with City Pages that covered how the non-music side of running Doomtree works (read the full article HERE).  In the question that was asked about our future ambitions for the label I mentioned our hopes of one day running a chain of food courts that contain each of our amazing restaurant ideas.  Without giving too much away: Sims has Trill Burger, Stef has Pain Town, I have South Sides, and Dessa has an as of yet unnamed banana smoothie stand.  At a recent meeting Ander and I got a chance to try a sampling of said banana smoothie concoction, and I have to say that I have pretty high hopes for this future endeavor.  Here’s a glimpse of what could be: 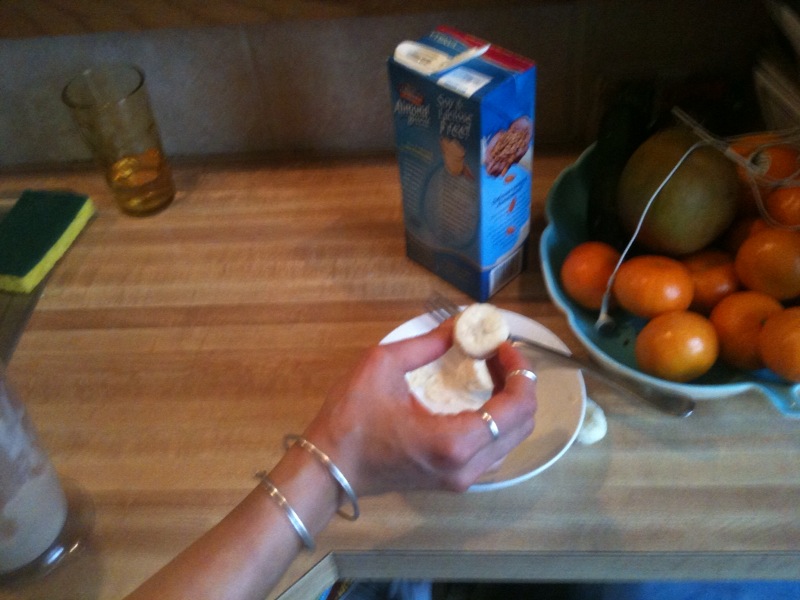 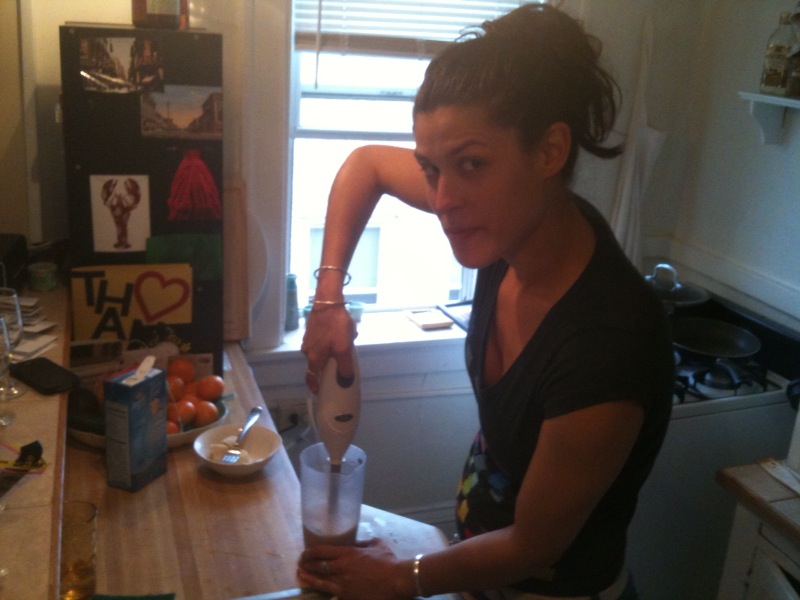 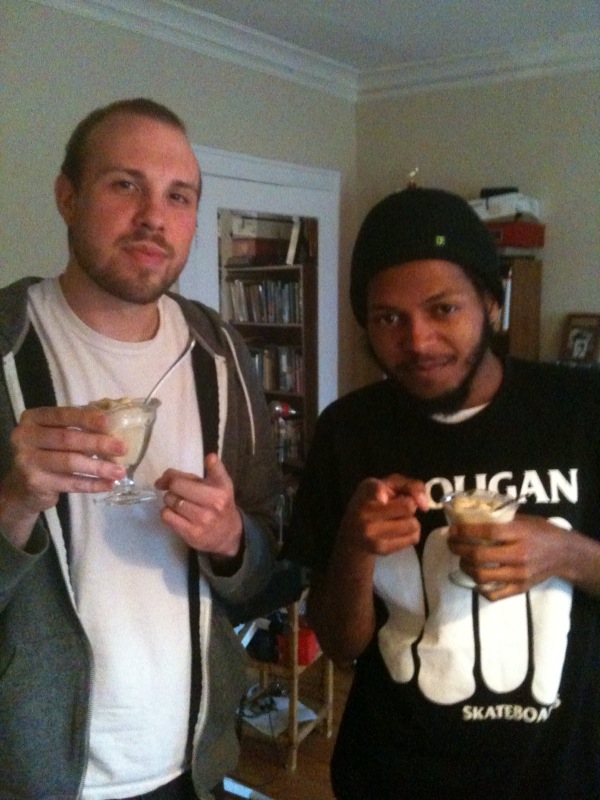 Satisfied customers!  Note the dual pointing at the camera signs of approval.  I would have easily paid upwards of $4-$5 for one of these bad boys.  Two thumbs up.  If you happen to be a wealthy investor interested in contributing to a young food visionary’s dream company, holler at us:  [email protected]  More Doomtree restaurant idea reviews to follow in the coming months.  You really don’t want it with Trill Burger.

In other food related news, last week someone decided to send a Totino’s Party Pizza to the Doomtree PO Box!  I kid you not. 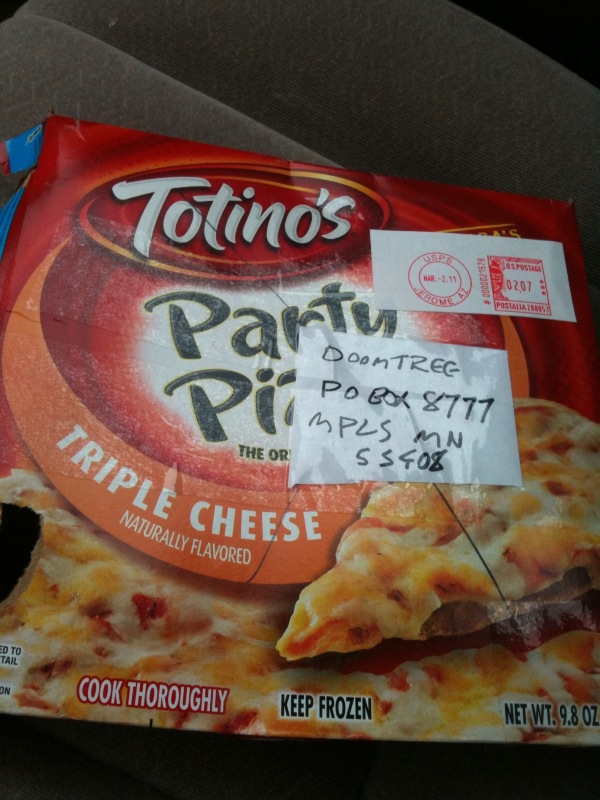 Luckily there was not an actual rotting pizza inside, and merely an Arizona weekly paper containing a favorable Bad Time Zoo review.  Nevertheless, my initial reaction was one of complete horror and embarrassment that our PO box had stunk up the whole post office for over a week straight.  I’ve learned over the years that you never want to upset the post office.

I was invited to speak to a college class at IPR last week about the art of beat making.  Huge shouts to the ultimate teacher and legend Kevin Beacham for having me.  Can’t say enough good things about that man.  Half way through the class my MPC pads went out and I spent about 15 minutes pounding the crap out of that thing with my fist to get it to come back to life and produce sound again.  Sorry you had to see that part students.  This rap producer lifestyle isn’t quite as glamorous as it’s made out to be.  After the class was over I tried to get Kevin to do the Legend Point with me, but I guess somebody had to hold the MPC.  This guy is always thinking. 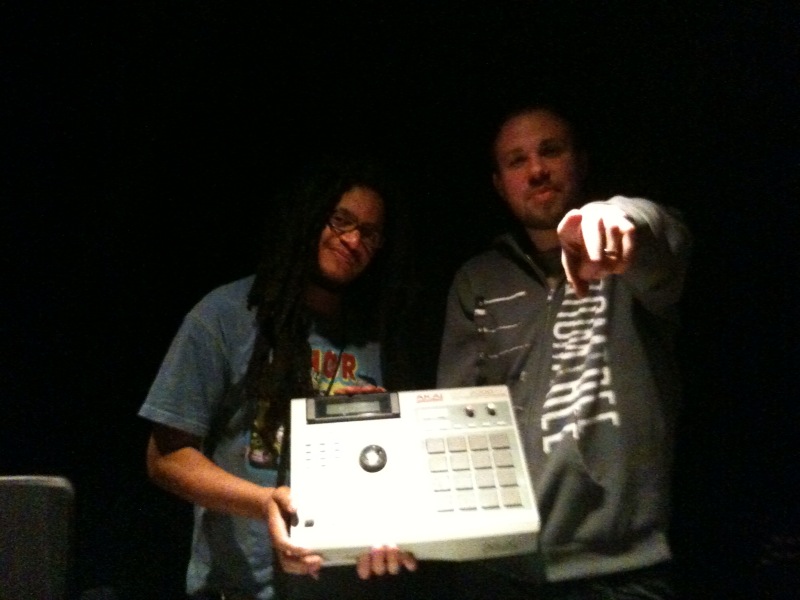 That about does it for this week.  I’ll leave you with a fairly unconventional Video Bonus Jam.  The NBA Playoffs are underway and I’ve gotten to see the first two Chicago Bulls games so far.  I really like that team.  My wife and I were talking recently about how the Bulls have hands down easily the greatest musical introduction in all of sports history: The Alan Parsons Project song “Sirius” (the instrumental heater that leads right into “Eye In The Sky”).  Trust me on this one.  I’ve included the original song, and below it a video of the Bulls starting linup intros from the Jordan/Pippen era.  Insanity!!!

Let’s just throw in a few more APP jams while we’re at it.  “Eye In The Sky” still rules, so below I’ve included the original version as well as Gayngs recent acoustic journeymen version of the smash hit.  So good.

Ha, speechless.  Have a great week.  Hopefully I’ll see a lot of you out on this upcoming tour.  Come say hi if you get a second.  Tour updates to follow throughout the coming weeks as long as the hotels have decent wifi.  Talk to you soon.