Hey everybody! I’ve got a pretty short post for you today (the classic slow news week/sick baby combo), so let’s switch things up a little bit and start right off the bat with some Mixtape Bonus Jams! Unconventional format, I know.

The big homie Paper Tiger has resurrected his 20 Minute Mix series by releasing a new collection of jams every week of March, in hopes of getting past this super lame last month of winter (windchill is -10 here currently) and ushering in the glorious return of spring (kind of like when Aslan came back to Narnia in Lion, Witch, and the Wardrobe, amiright?). So far Papes has delivered a Spring Fever mix and a tribute to Notorious B.I.G, and this third installment of the series is all about the legendary De La Soul. 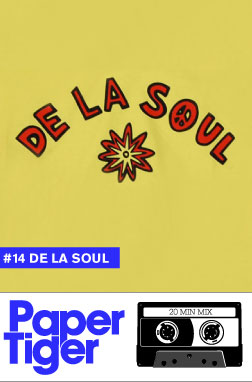 If you are for some reason unfamiliar with De La, it’s definitely time to learn you something. We got to play right before these guys at Soundset a few years back, and they still crush it after over 25 years in the game. LEGENDZ, for real. Check out the De La Soul mix below, as well as the Spring Fever and Biggie mixes in case you missed them the last couple weeks. Streaming and free download options are both available.

Paper is back in the Twin Cities for a few days this weekend, and he’s gonna be DJing a very special Doomtree/Wants Vs. Needs party with Espada this Saturday at Clug Jager. This will be the best, guaranteed. Click the flyer for more details. 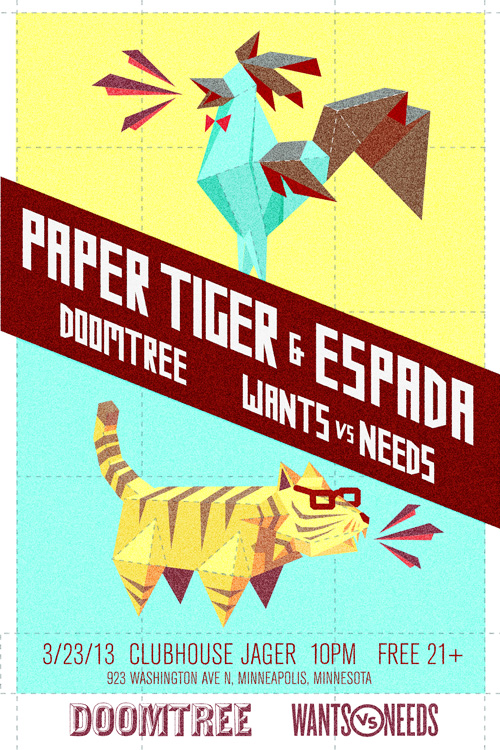 In more show news, Dessa and band wrapped up their big stint at SXSW this past weekend and are slowly making the loop back home. Six shows still remain throughout the South and Midwest though, so if you’re anywhere near those parts I’d highly recommend coming out to see some of these new songs in person. New Orleans, Atlanta, Nashville, Columbia, Madison, and Morris: I’m looking at you. Click HERE for all the details and ticket info, and check out the remaining dates below. 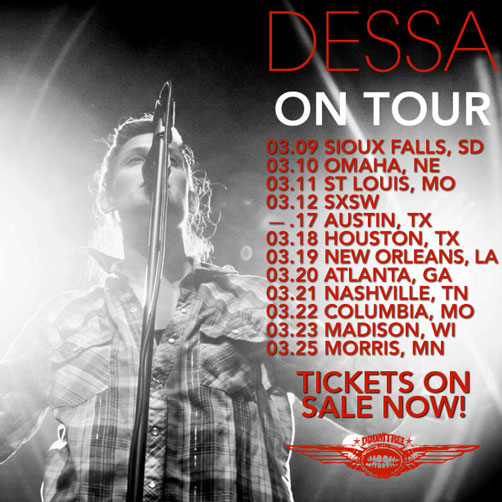 I stole a few shots from Dessa’s instagram feed to give you a quick pictorial update from the road. Here’s Joey, Sean, Dessa, and Dustin trying out some strange “Open Sesame”-esque magic spells on what I can only imagine to be a very strangely built and heavily guarded hotel door. 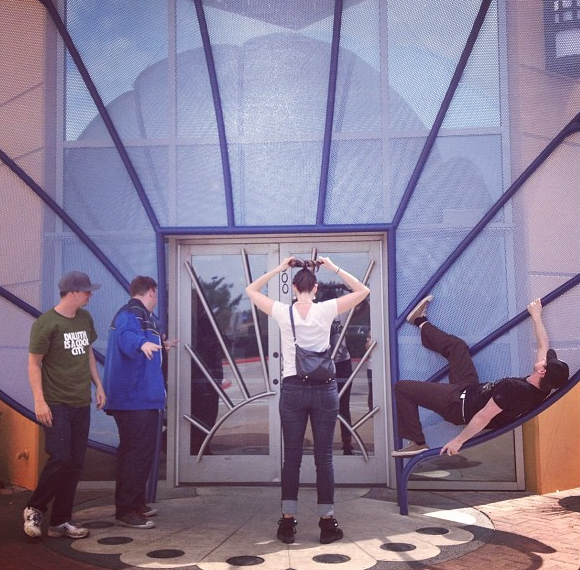 Not pictured above: Aby Wolf, who has apparently morphed into some sort of superhuman comic book character, fighting truck stop crime in the shadows of the night. Wolfcrawler? 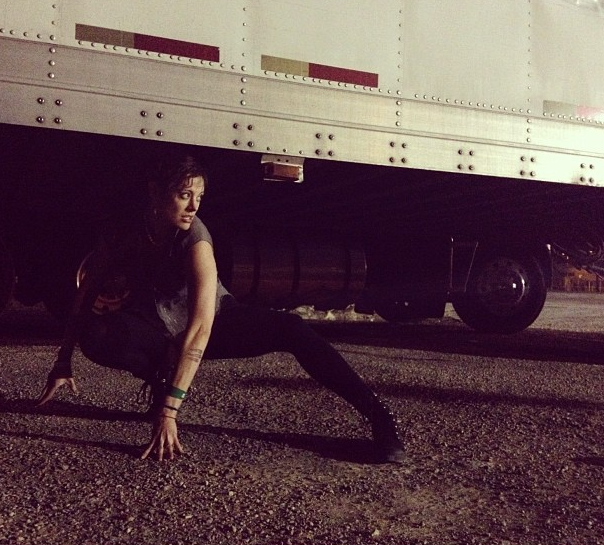 The gang played a total of four scheduled shows while down in Austin, plus in typical SXSW fashion, one more that was announced a mere two hours before stage time, and also came with this handy three man security detail. You can never be too safe. 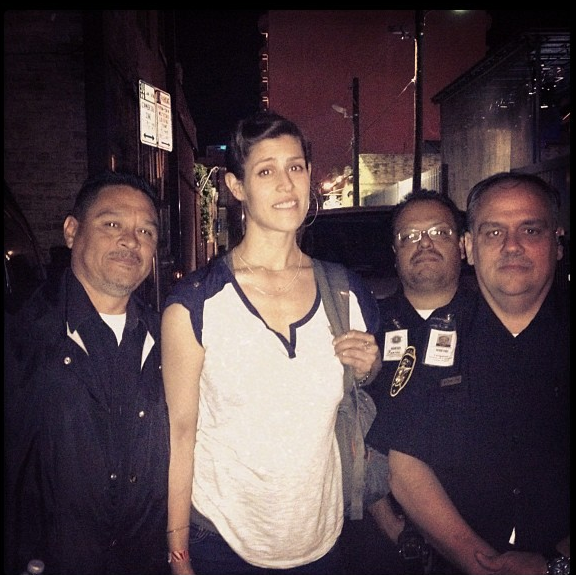 Here’s a view from stage at the beyond sold out Blind Pig for the Copycats day party that Dessa headlined with surprise special guest Macklemore. 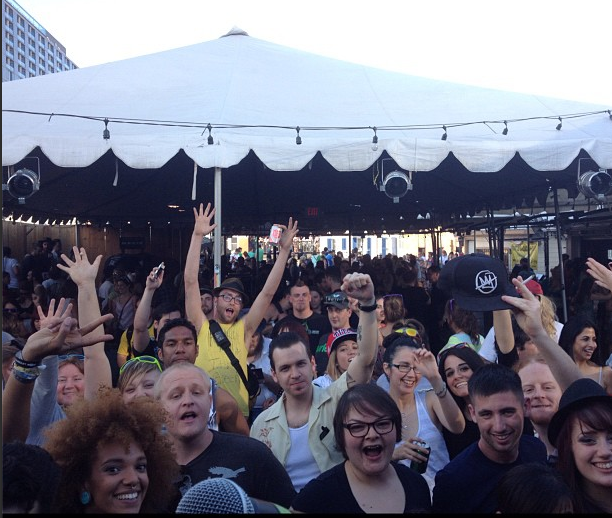 And here’s Joey with an entire bag full of fireworks. Seriously, try to catch one of these shows this week before the band goes down to a drummer-less four piece. 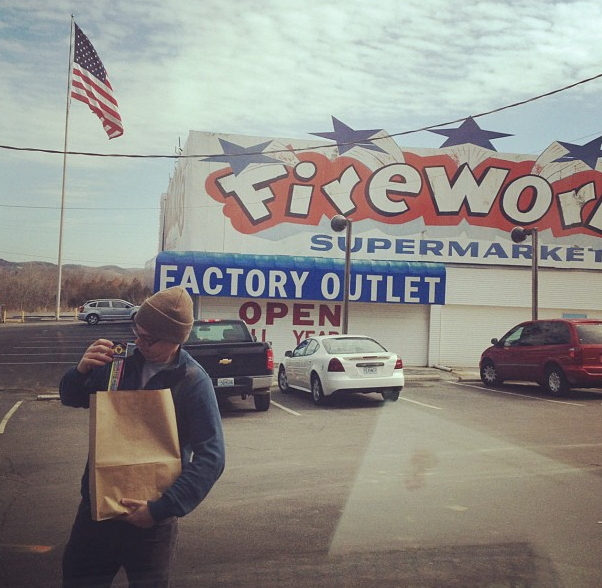 Now for a quick Local News Coverage Bonus Jam! KARE 11, one of the big local television stations here in Minnesota, is going to be airing an hour-long music special this weekend documenting the current local music scene. It’s called “Soundcheck, MN” and will feature Doomtree and include segments with P.O.S and Dessa. It goes down this Saturday at 9:00pm (CST). Check out the trailer below. I’m told portions of the special will be made available online as well for anybody outside of the region that’s interested. Keep you posted on that.

Alright, let’s take this whole post full circle and end things with a real deal Bonus Jam. Black Milk just dropped a new song last night after laying low this past year, and it is really awesome. This dude is definitely one of my favorite producers, and his rapping has been getting better and better with every album he drops. Check out the double-single “Sunday’s Best/Monday’s Worst” below, and keep an eye out for a new full length this summer.

And for good measure, here’s a couple classic Black Milk joints while I’m at it.

OK, I hope you all have a great week. See you next Tuesday!