Hey! Welcome back to Tuesdays With Lazerbeak. There was no way this week’s post was going to rival the action packed news day of last Tuesday, so I’m throwing every random thing I can think of into this one and hoping for at least a couple flawless segues in the process. Let’s start things off with the Summer Show Wrap Up. Can’t believe it’s August already, and that means that there’s a couple big festival dates left before the weather turns cooler. Summer Set takes place this weekend in beautiful Somerset, Wisconsin (see what they did there?), and both Doomtree (all seven members, Saturday) and Dessa (solo show with band, Sunday) will be gracing the stage. Click the flyer below for all the details and ticket info. This will be the last full crew performance of the summer, and we’re going out with a serious bang. Can’t wait to see Papes too! Sick Trim 4 Lyfe. 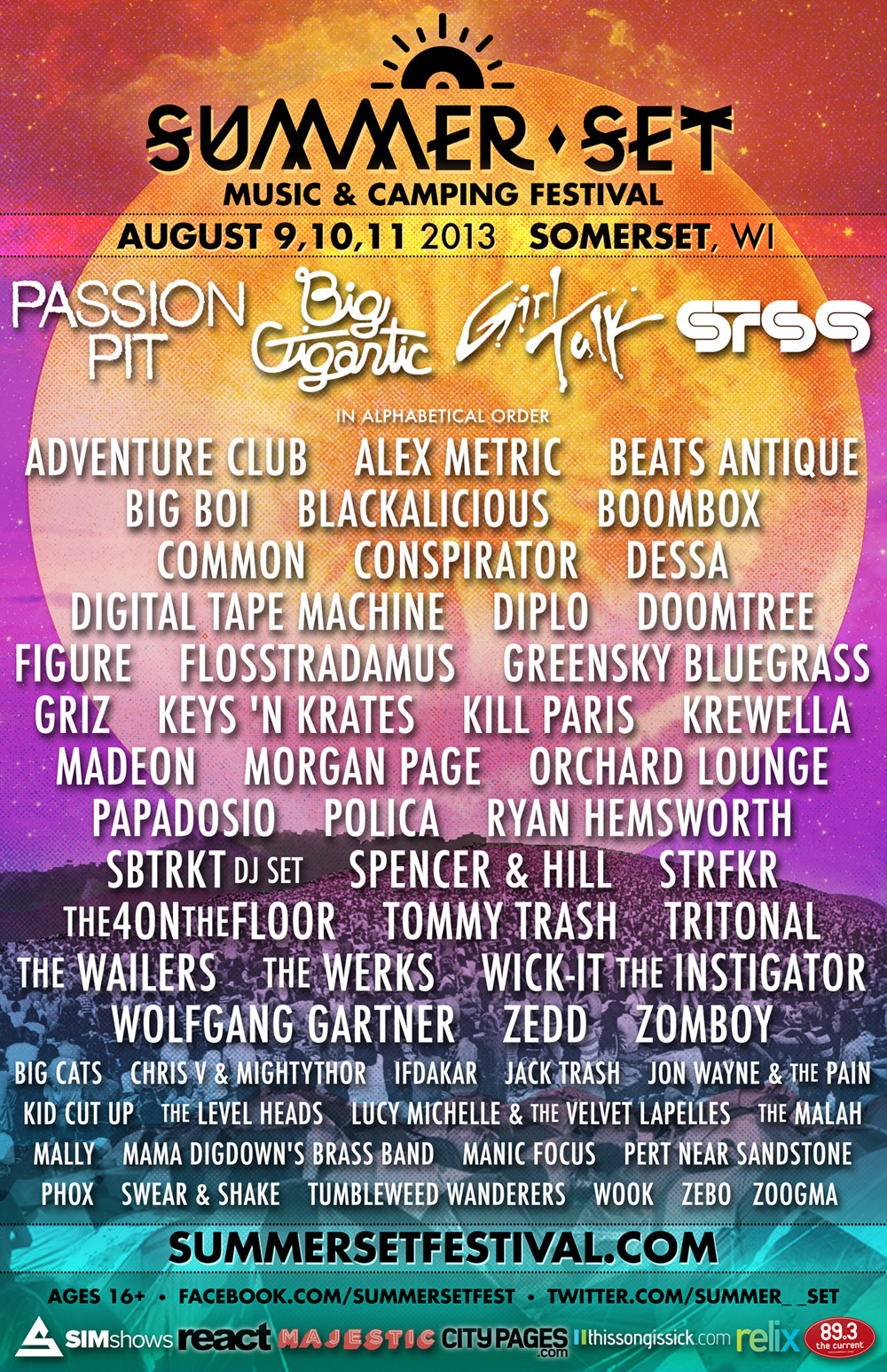 Then the following Saturday, August 17th, our very own Mike Mictlan will be playing main support to Brother Ali at the annual West Bank Music Festival. This show is a blast every year. Again, click the flyer for all the info. 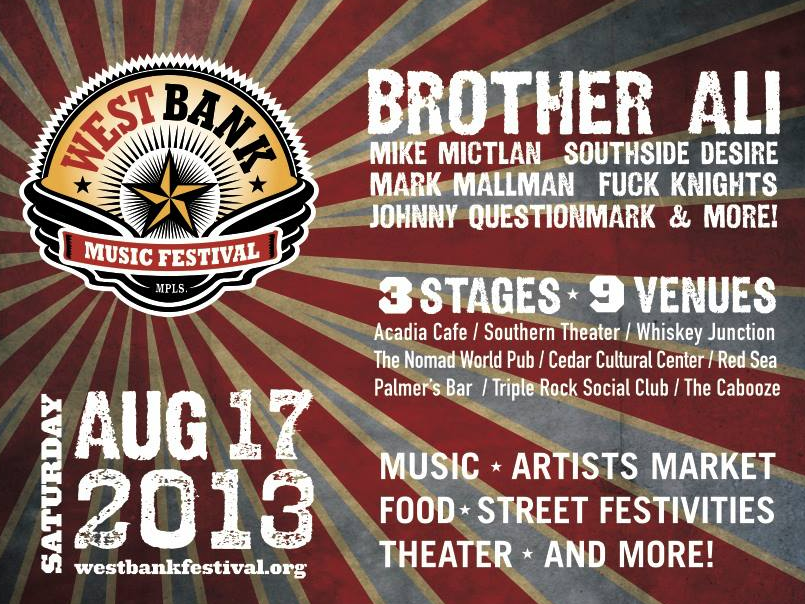 Speaking of Mike (one flawless segue down), he came over to my “office” last week to get into some serious HELLA FRREAL album scheming, and an impromptu baby dance party broke out while we were previewing a few new demos. Penny is clearly a huge fan (you’ll recall she dressed up as a spicy peeñ for Halloween last year), and definitely co-signs these new tracks. 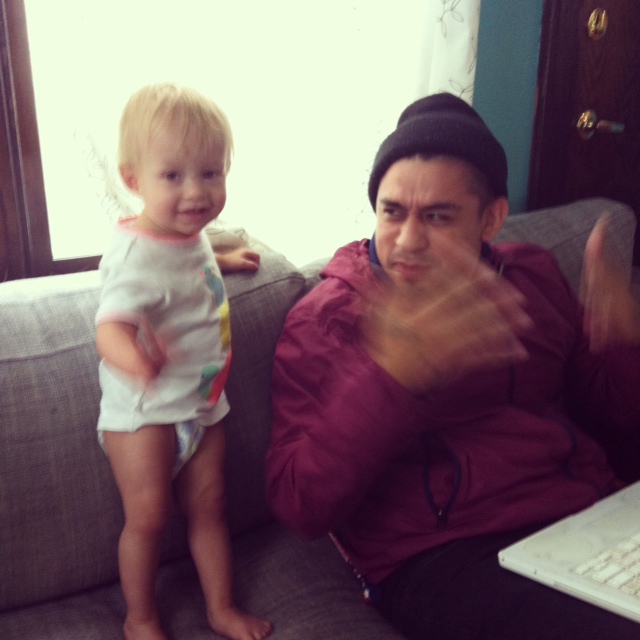 Oh, and if you happened to completely sleep your way through last week, make sure to check out the new Isaac Gale/David Jensen directed insane vizual for Mike and Greg Grease’s track “WZRD Science,” off of Mike’s SNAXXX project from last year. The best song on the album now has the best video of all time to accompany it. SERIOUSLY WATCH IT. Such a great 90’s rap vid vibe.

Stef has a big show coming up at the end of the month over at the MN State Fair Grandstand (generally reserved for enormous country artists and Macklemore), plus a string of one-off dates in September and October. Click the flyer for more details and ticket info. 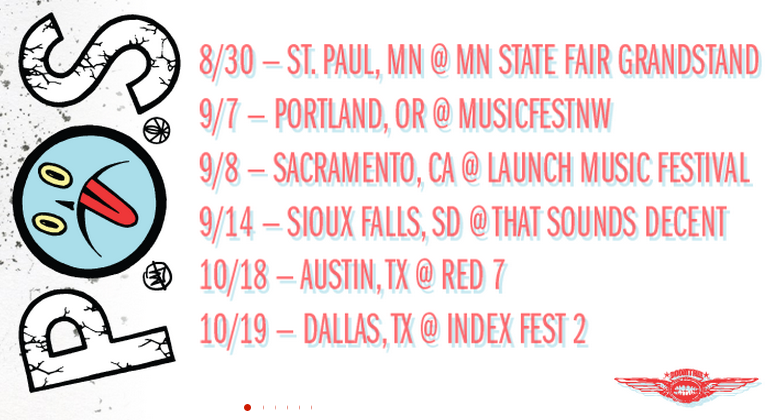 Speaking of Stef (segue quota achieved!), here’s a really awesome picture that I stole from his Instagram account, documenting the serious love affair between rappers and their Wild Hogz (loved that movie). Here’s Sims, Stef, and Astronautalis gearing up for something very motorcycle related up (I gotta learn more bike slang than just wild hogz). 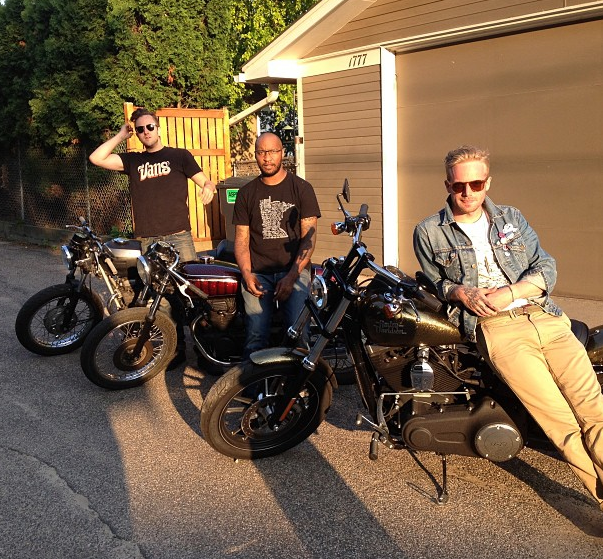 Dessa has been home from the Parts of Speech Tour for less than a week now, and she’s already gearing up to hit the road again. In addition to her Summer Set show this weekend, she’ll be taking the whole band out East this September to bring the Parts of Speech Tour to the rest of the country. Click the flyer below for all the details and ticket info. 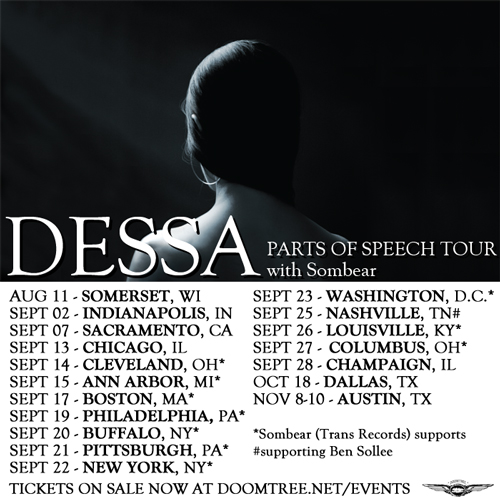 It appears that in order to train for this upcoming run, she has decided to camp outside of the local U-Haul and do some bizarre one armed push ups until her trailer is available to rent again. Seems like a perfectly logical game plan, I’m into it. 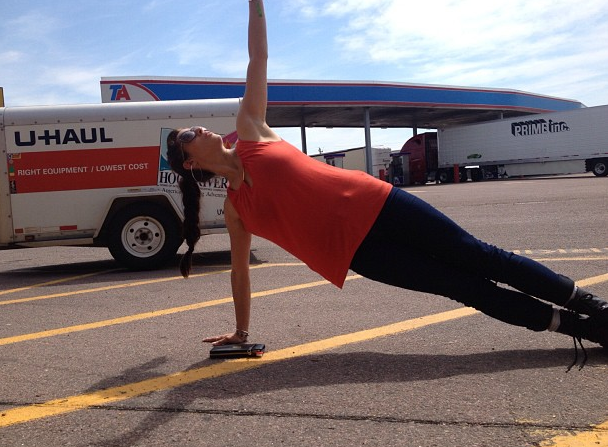 Oh yeah, almos forgot. One more all crew Doomtree show is scheduled this September out in Sacramento, CA for the Launch Music Festival. Expect a big all crew performance, as well as earlier solo sets from Dessa and P.O.S. Check out all the info below and click the flyer for ticket info. Can’t wait to see Blonde Redhead and Turquoise Jeep! 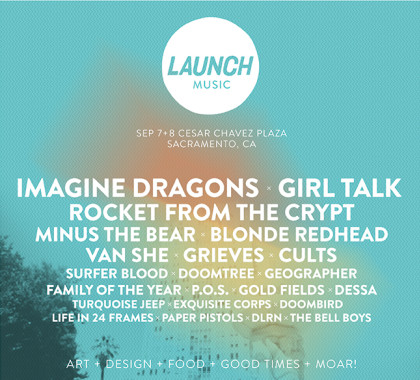 Last week was a pretty crazy two night insane show double header for me (rarer and rarer in these Dad Lyfe days). My favorite band (and what I  believe to be the GREATEST ROCK BAND OF THIS CENTURY), The Killers, played Roy Wilkins on Thursday night. This was my third time seeing them live, and they did not disappoint. I was so excited that I decided to break the sacred PCU rule and wear the band’s t-shirt to their show. For one night only I WAS THAT GUY! Air high bass added below to demonstrate the level of excitement/fearlessness I was working with. Thanks to Jeff and JC (aka G&T B&B SQUAAAAAD) for backing me up in this endeavor. 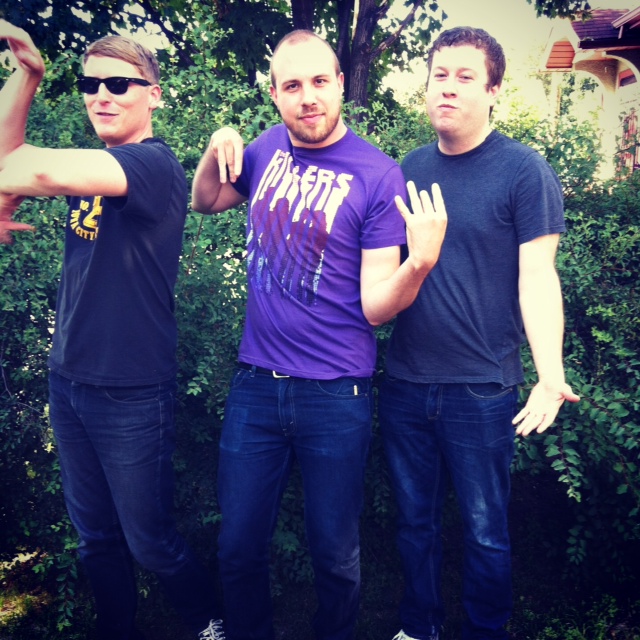 I will say that I received a free order of nachos at the bar before the show, based solely off of wearing said t-shirt, so I feel thoroughly vindicated in my decision. Didn’t get too many good pictures because I was singing along too hard and yelling “Storm Man” at the bass player (his last name is Stoermer, you had to be there), but here’s just a glimpse at the kind of pyrotechnics they had on hand. I’ve never seen anywhere near that amount fireworks at an indoor concert in my life. Also, they had their own custom “K” logo and lightning bolt confetti. BIG TYME. One of my favorite shows hands down, despite the fact that they barely even broke into deep cut territory. I guess it must be tough having so many HITZ. 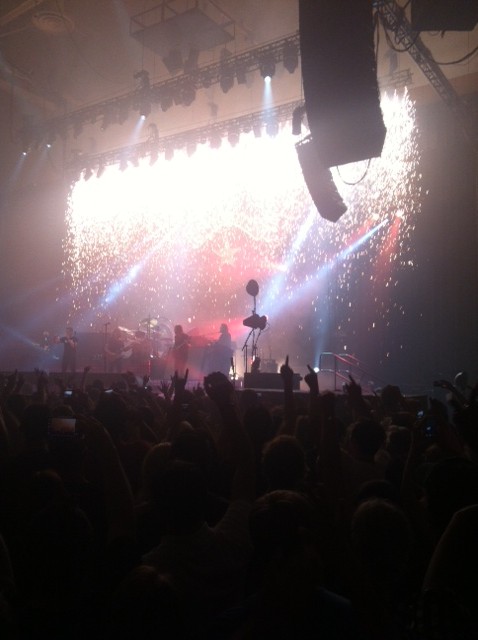 The following night was the Mixed Blood Majority show over at Icehouse, which ended up being a ton of fun. Huge shouts to Bomba de Luz, Dem Atlas, Manchita, Sophia Eris, Lizzo, and Toki Wright (who appeared out of thin air from an opening set at the Naughty By Nature show) for hitting the stage with us. Also major shouts to Icehouse myxologyst/bartender Jon Olson for creating the Majority Rules mixed drink for the evening. Those things were delicious. Here’s Joe getting into one before the set. 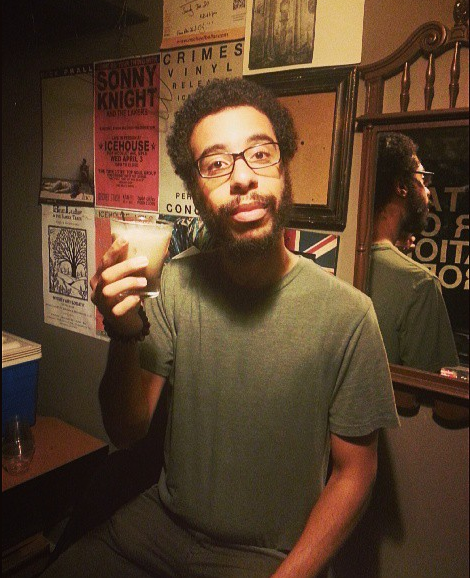 And here’s a picture of GRRRL PRTY playing a few brand new songs in between Bomba and MBM’s sets. Definitely a highlight of the evening. 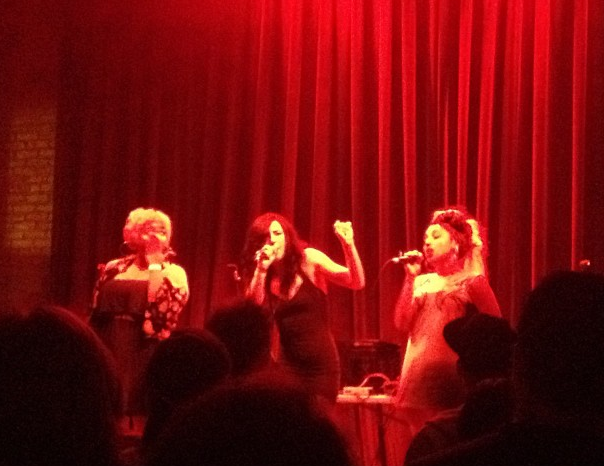 Speaking of Lizzo (segue streak EXCEEDED!), we’re wrapping up the final audio masters for LIZZOBANGERS tonight and should have a bunch of album announcement stuff for you in the coming weeks!!! Beyond huge shouts to BJ Burton for putting in so much work on the mix end. He snapped this picture during one of our final sessions a few weeks back. Had to celebrate a year’s worth of hustling with an Hijos de Villa tequila pistol! It’s only right. 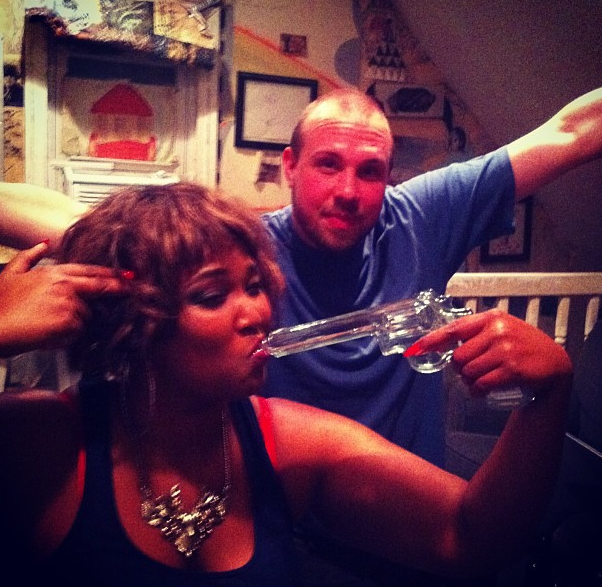 And now to kind of sloppily tie this whole tangent up, here’s the new Bonus Jam collabo track from Mixed Blood Majority and Lizzo one more time, in case you missed it last week. We had a blast performing this song live for the first time on Friday. Thanks to The Current for putting it in rotation as well. Check it out below.

Alright! You made it all the way to the bottom, nicely done. I’ll leave you with a couple Bonus Penny Pics before calling it quits. The last few weeks have been pretty insane over here at the Mader household. Penny is now walking nonstop, talking gibberish a mile a minute (“woweewowwow,” uh-oh,” and “tickletickletickle” among her favorite sayings), and climbing whatever stairs she can get her hands on. It took me about a full day to set up all the baby gates around the house (not the handiest of dudes), and not an hour goes by that I don’t stub my toe on one those things (not the most coordinated either). Anyways, it’s been awesome watching her come more and more into her own this summer. Here she is housing some juice and generally looking like a bad ass at the SAME DAMN TIME. That hair is a serious problem. This is also the face I imagine celebrities make before they smash the camera out of the paparazzi’s hands. Might be a subtle hint to slow my Bonus Penny Pic roll a little. 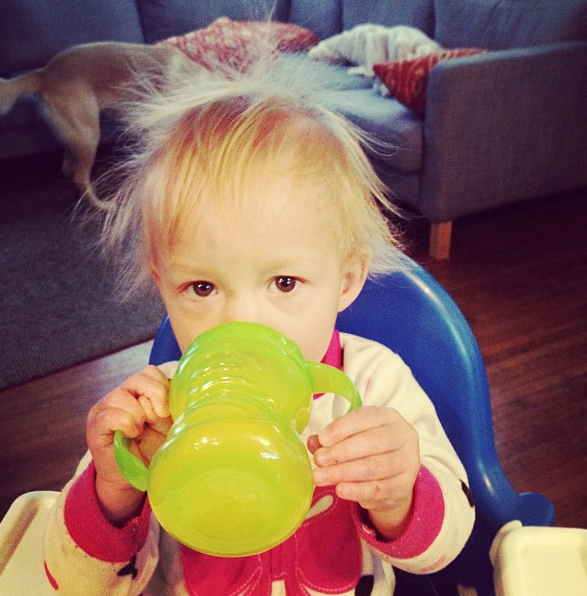 They grow up so fast. Here she is trying on a pair of Dad’s shoes. Please don’t judge me for constantly dressing her in pajamas. It’s become the inspiration for a new kids country song I’m working on called “Looks Like Your Daddy Dressed Ya.” Smash hit in the works for real. 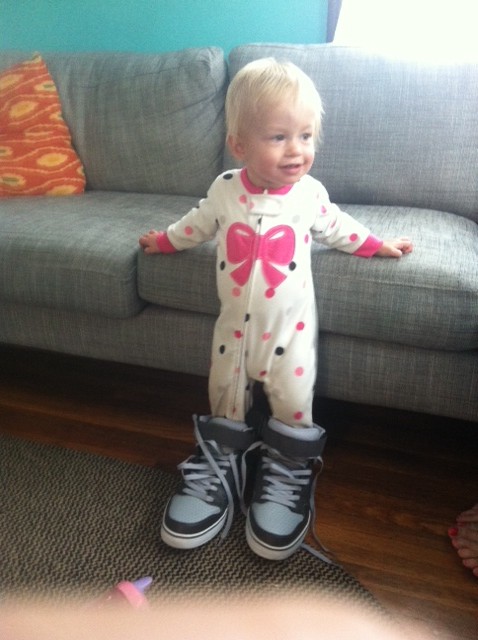 And lastly, here she is at her very first Minnesota Lynx basketball game / Y.N. Rich Kids halftime show performance. She loved everything about it right up until “Hot Cheetos and Takis” ended, which was when she proceeded to shatter my phone on the concrete by the hot dog stand. I blame Y.N. Rick Kids for not playing a longer set, but AT&T wasn’t really having that. Anyways, here are a few shots pre-phone rage, back when things were much simpler. 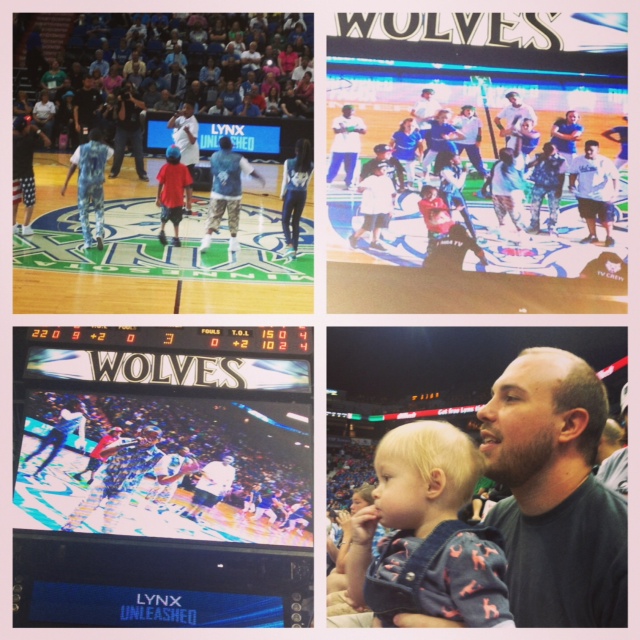 GO LYNX! Alright, that about does it for today’s all over the place post. I hope you all have a wonderful week. See you next Tuesday for sure!