The confetti has settled; the champagne is cashed. Here at Doomtree’s underground headquarters and we’ve enjoyed a few days of R&R.

Before our new record, All Hands, hits shelves and we hit the road, I’d like to share a quick glimpse into one of my favorite projects from last month. On the third night of our tenth and final Blowout, each member of Doomtree performed a solo set at the Icehouse, a classy club in Uptown, Minneapolis. I sang with my group the Boy Sopranos: a little whiskey-drinking choir in white dresses and black boots. This time around I enlisted Aby Wolf, Ashley Gold, and Janey Winterbauer to sing with me. Andy Thompson sat in to help out on the piano. 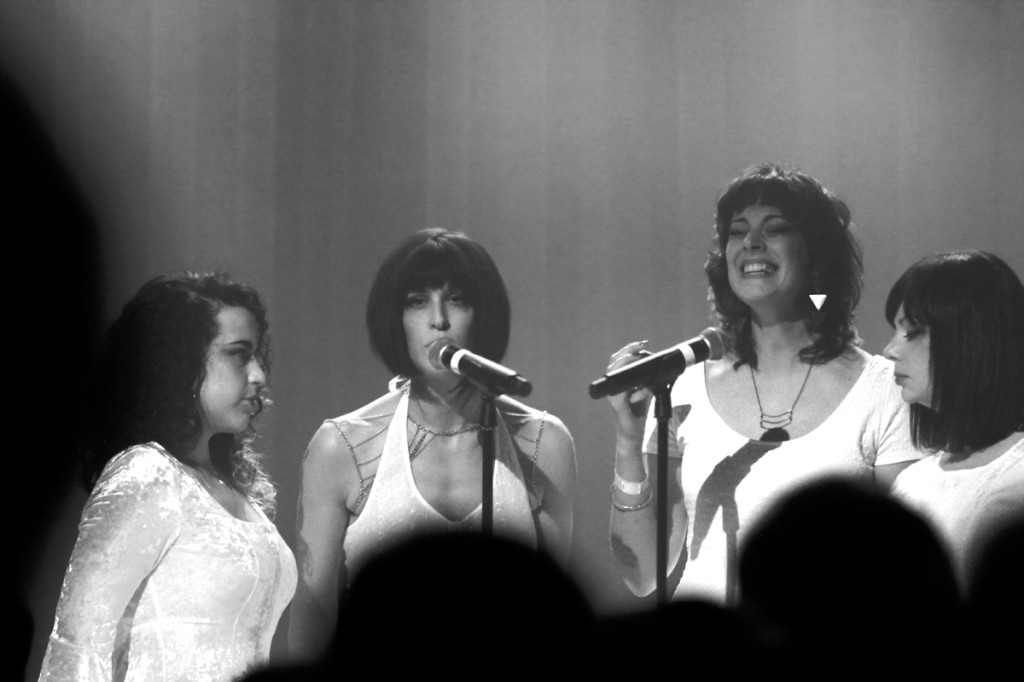 I wanted to do some special costuming for the Icehouse Blowout set–something with lights. Something beautiful and spooky. I wanted our sternums to glow, and I wanted lights in our mouths. (After about ten minutes of daydreaming, I realized I was striving to recreate a dramatic [and formative] scene from the Little Mermaid.)

As it happened, I knew the exact guy for the job. Adam Wolf. 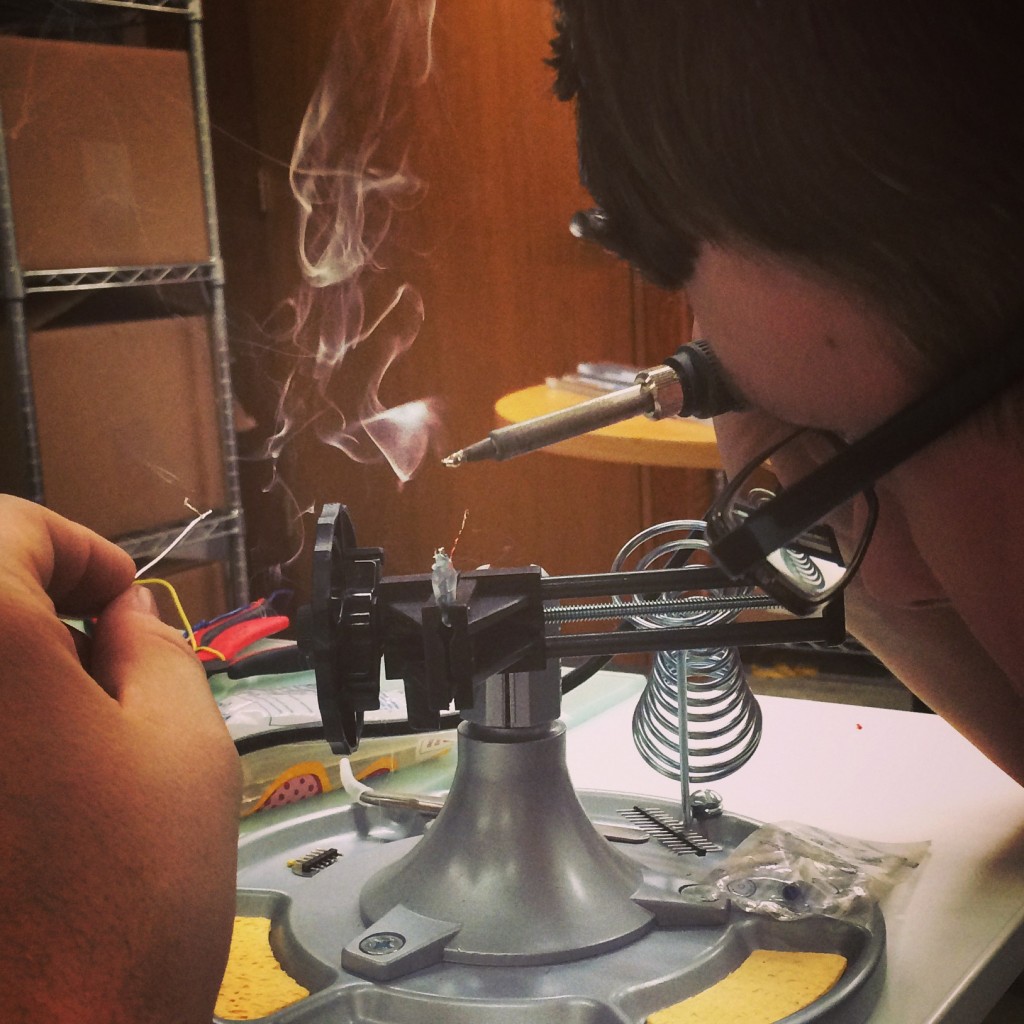 Adam is a maker and an expert in LED lights. He works in a little lab, also in Uptown, called Wanye and Layne, LLC. They make all sorts of open-source hardware kits and projects.

The mouthpiece has gotta be small, I said, and it can’t interfere with speech sounds.

How long does the effect have to last?

Not long, just a few minutes.

Adam took out the slim disc of a battery, smaller than a dime.

Yeah, that’s great. We could hide that in a cheek no problem. But the light has to be somewhere at the roof of our mouths. And small, really small. 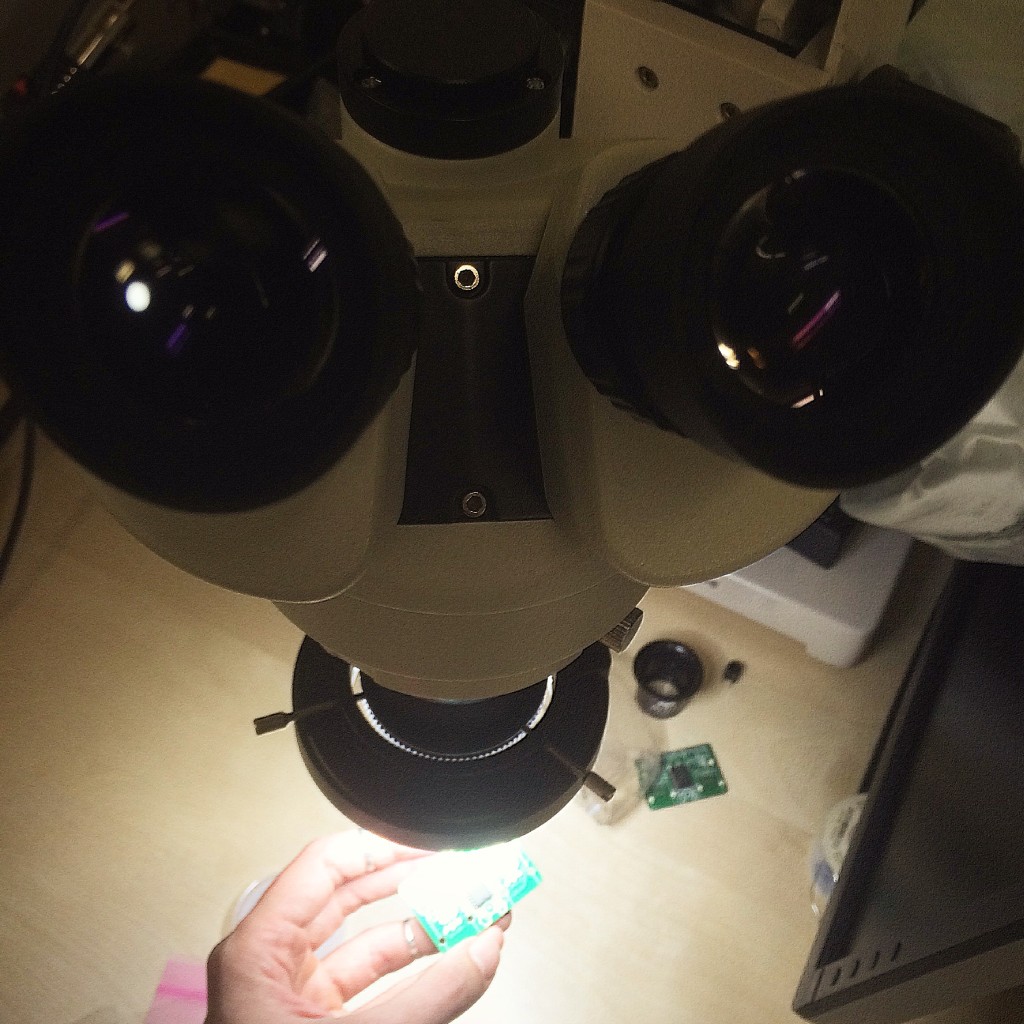 As it turned out, the lights that Adam and his team used were so small they had to be soldered under a microscope in his lab. They were just little LED flakes really, that he mounted between two fine wires. But when he wired them to our battery they were bright. For one moment, we worried they might be too bright—then we giggled like idiots because what a delightful problem to have when building a glowing mouthpiece. 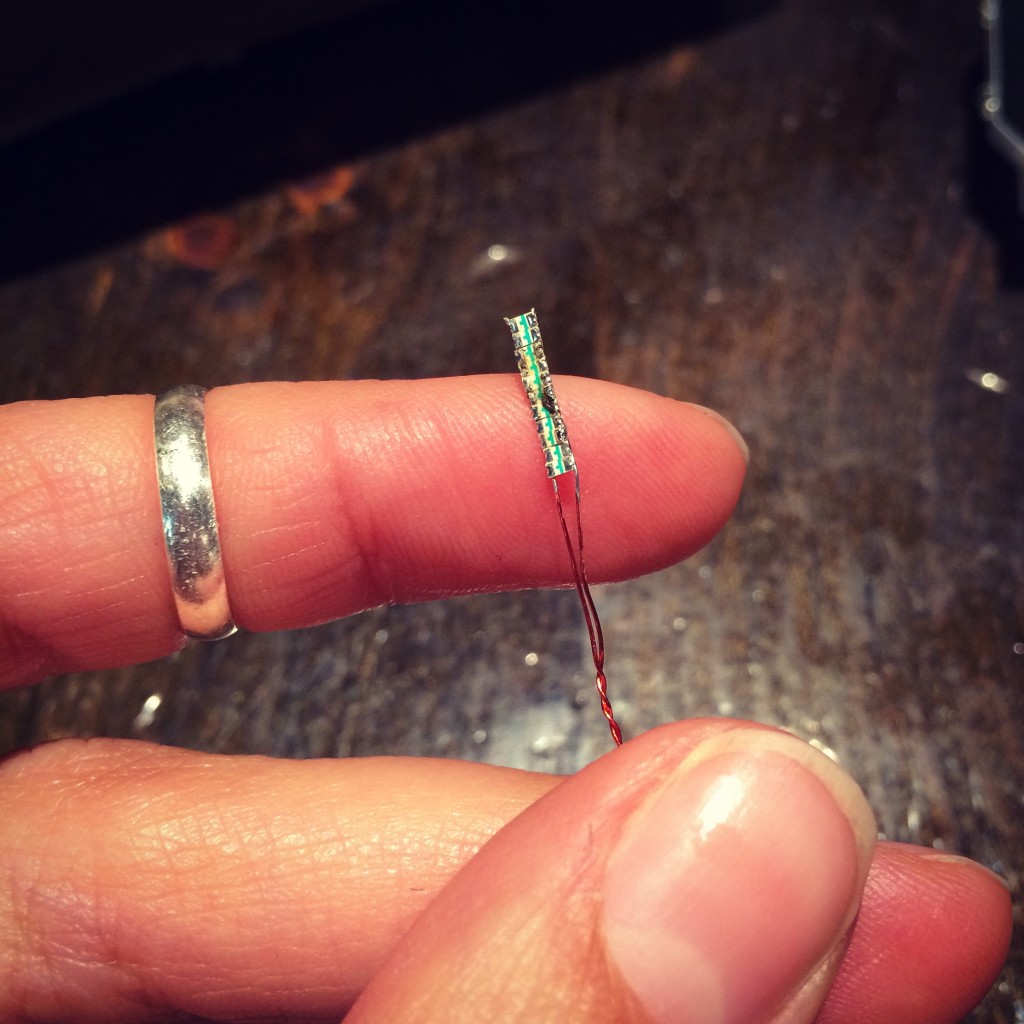 Now we just had to figure out how to turn them on and off during the show. I didn’t want them to be lit for the duration of the performance–I wanted to reveal them only at the end, a finale.

Could we get a little switch that we’d depress with our tongues? That sounded iffy and rather ungainly.

Could we work it by remote control? Yes, but that would require putting a receiver in our mouths, way too big.

Adam came up with a brilliant solution. 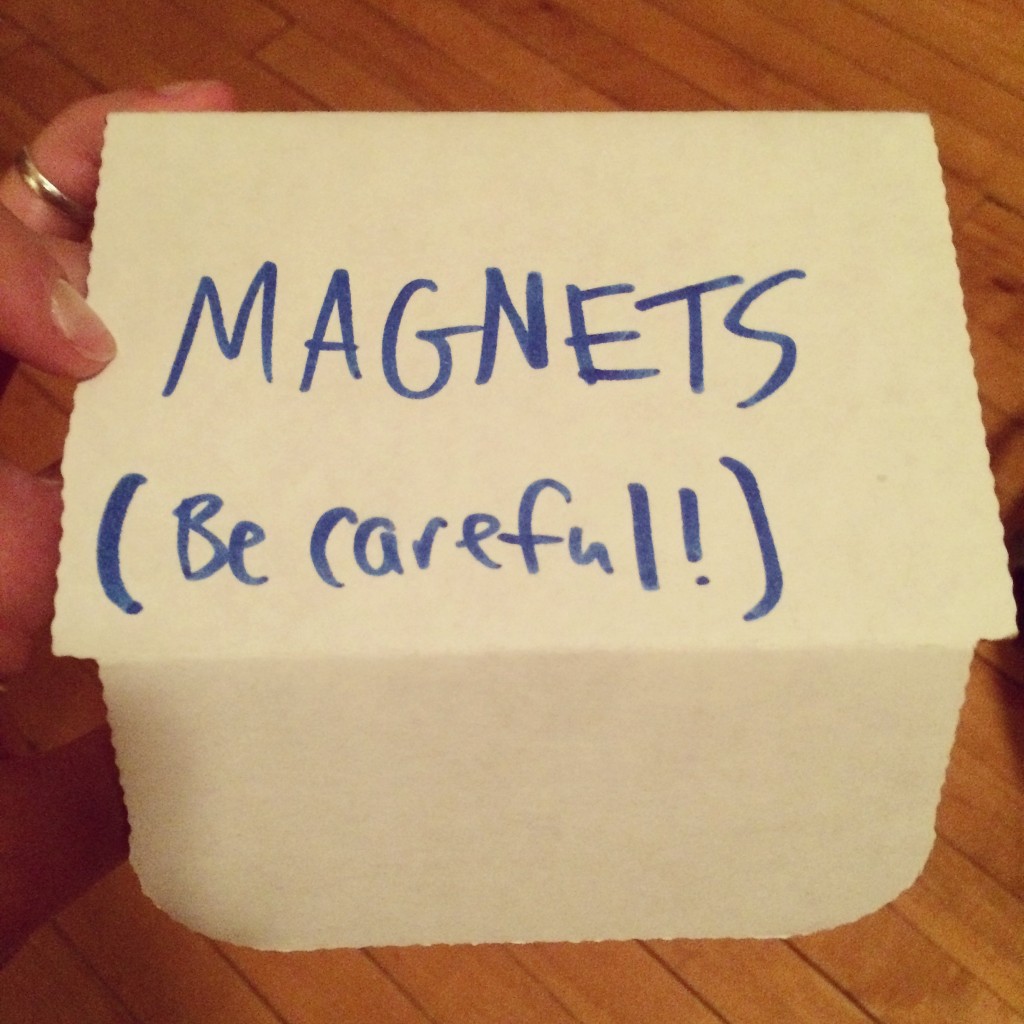 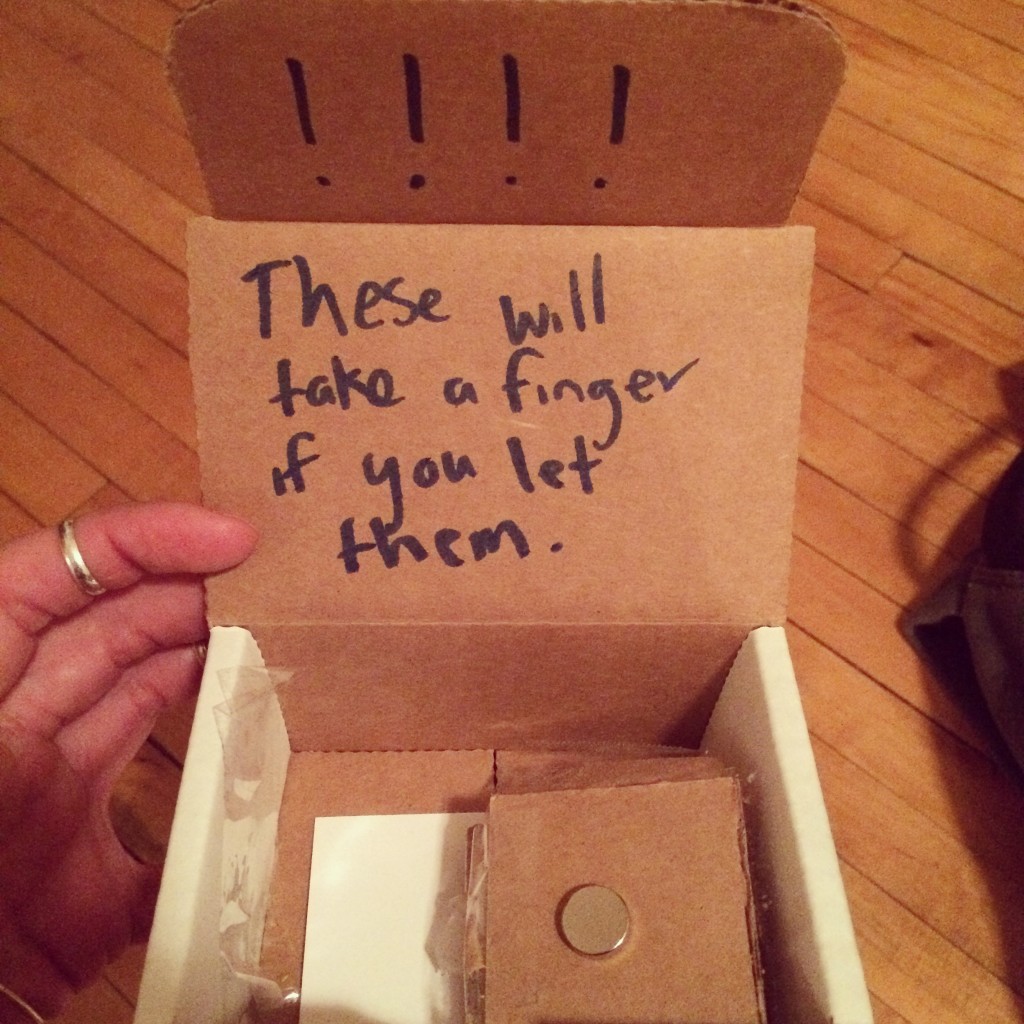 Adam wired together a device with three parts: a light, a battery, and a little switch that was magnetically activated. The electrical circuit remained open until a magnet was near, then the circuit closed and the light flashed on. The earth metal magnets he gave me were small, but crazily strong. It was hard to pull them apart, hard to keep them apart, it was hard to handle them without losing one as it jumped towards the nearest mic stand or metal shelf. 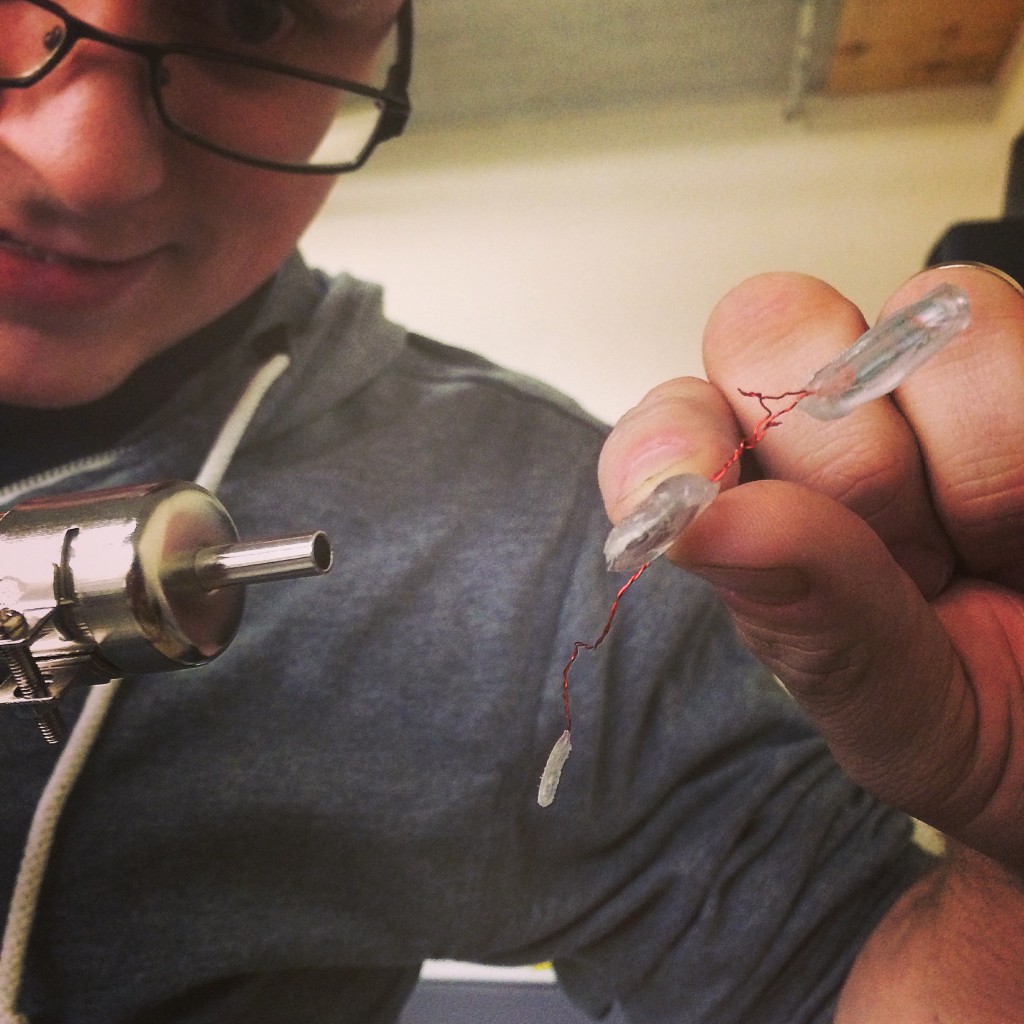 The tricky part, Adam said, was making sure your mouth didn’t close the circuit. To ensure that my spit didn’t interfere with the electronics, Adam covered each of the three parts with a mouth-safe moldable plastic. Here he’s heating the plastic with a hot-air gun to do a little shaping.

I left with one device for me and one for Aby.

Next stop: The Dentist. 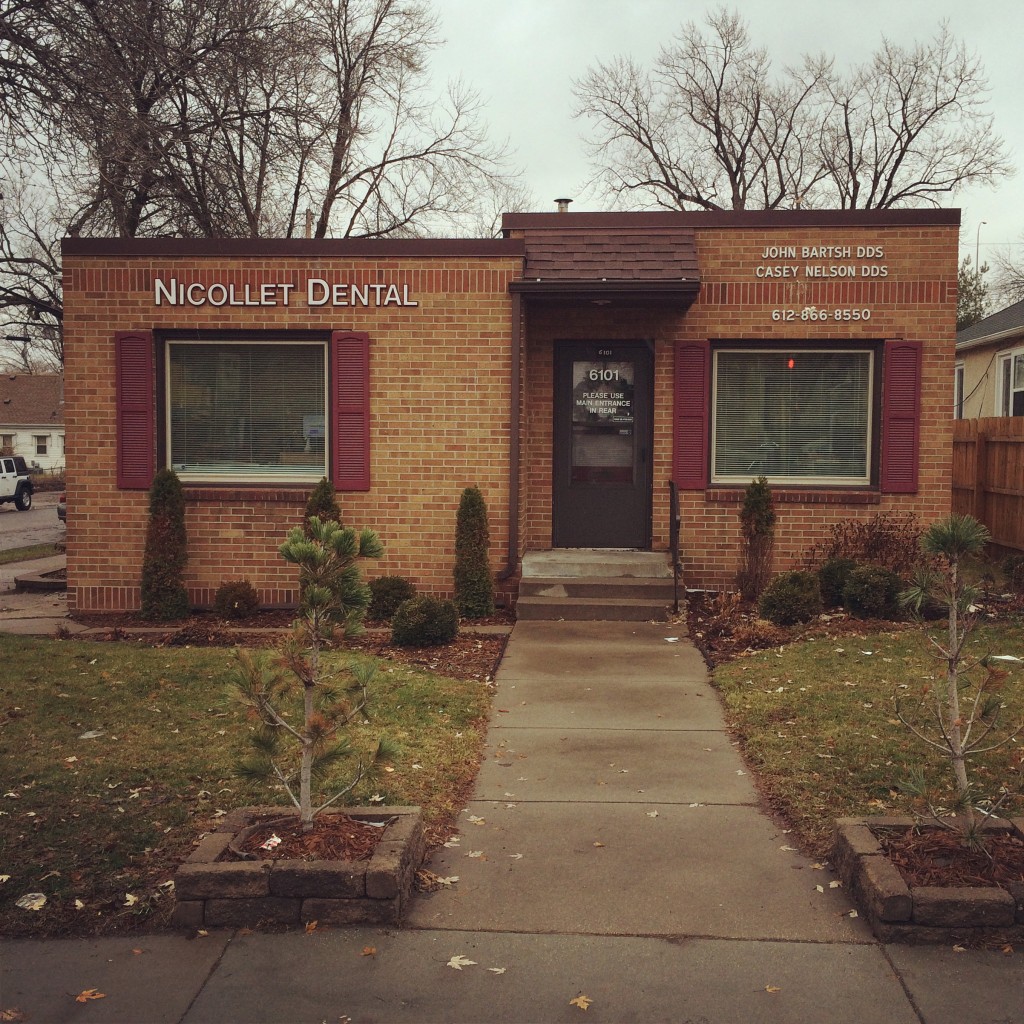 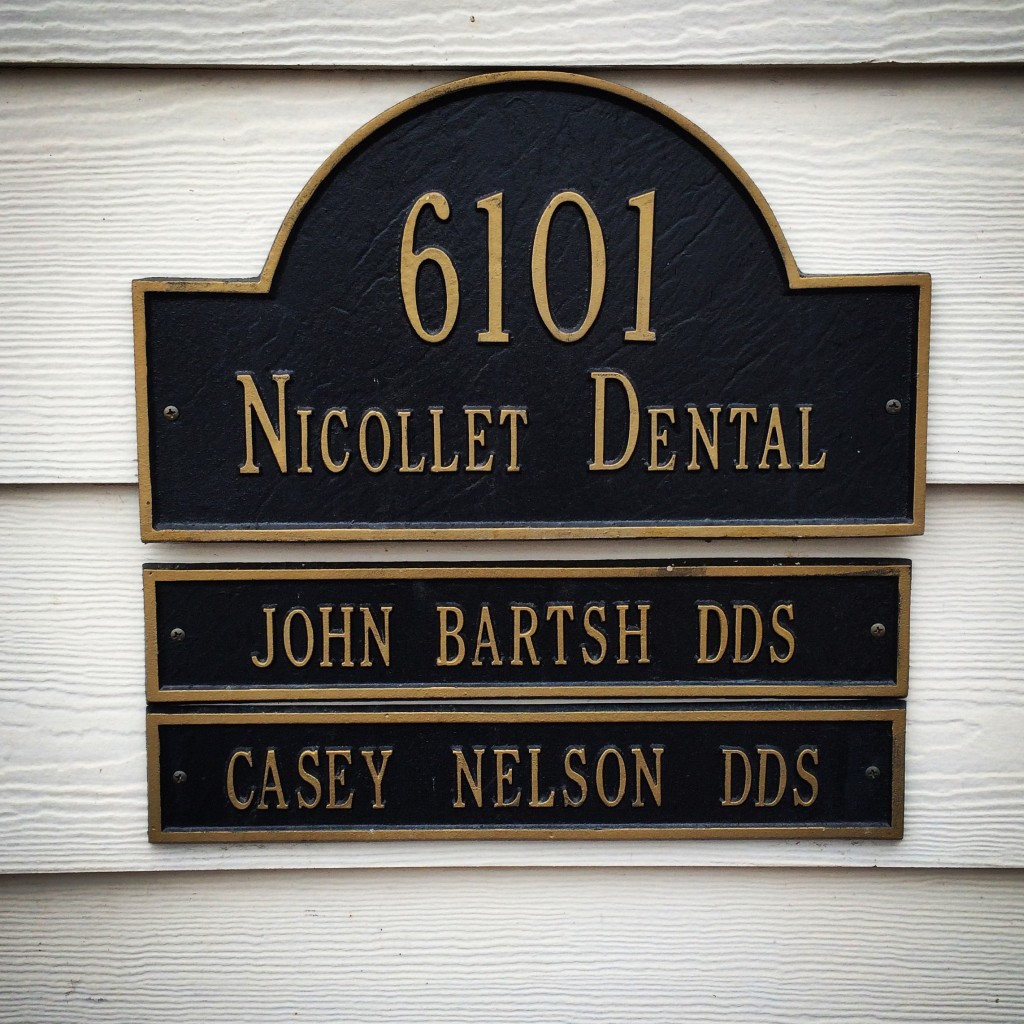 I called Dr. Nelson and asked if he’d like to get involved in an art project of sorts. 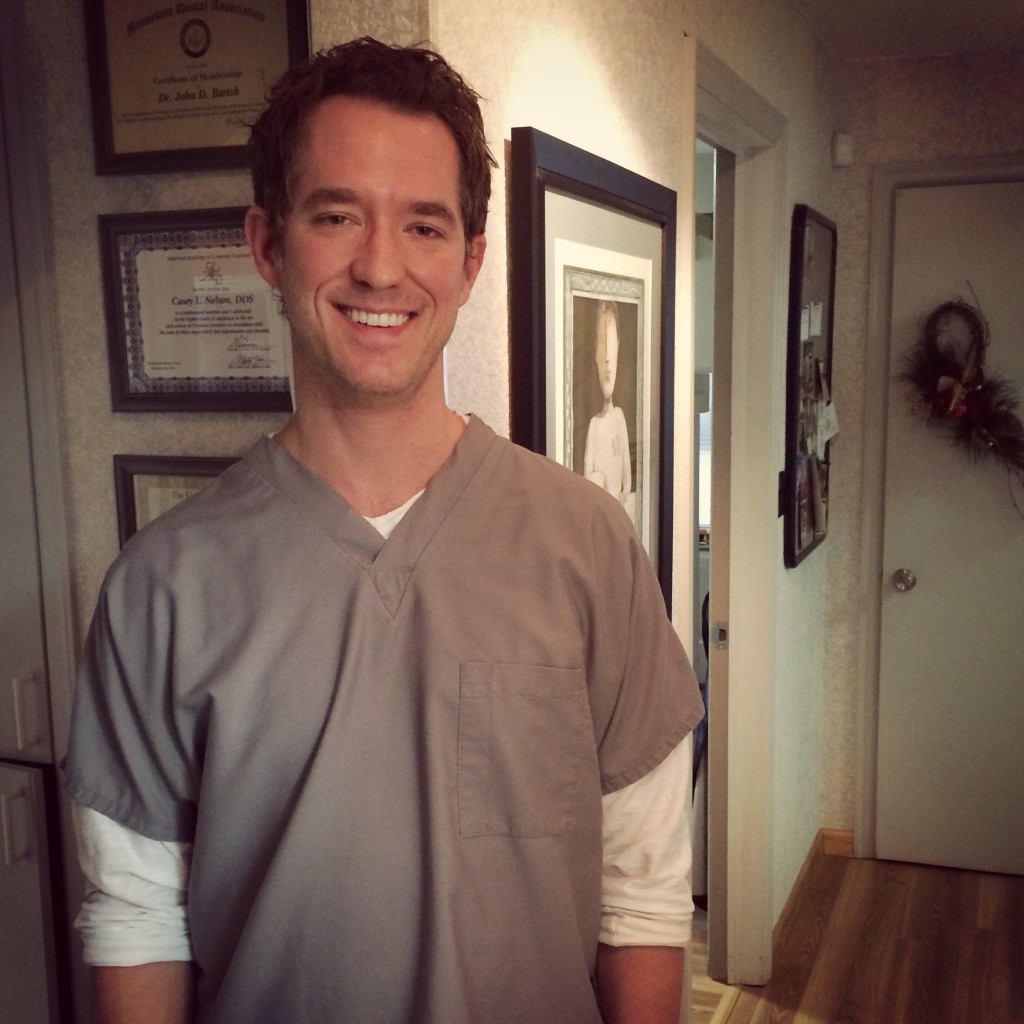 I gave him what we’d come up with. Give me a day or two, he said. Also, can you ask Aby to stop by so I can make an impression of her bite? 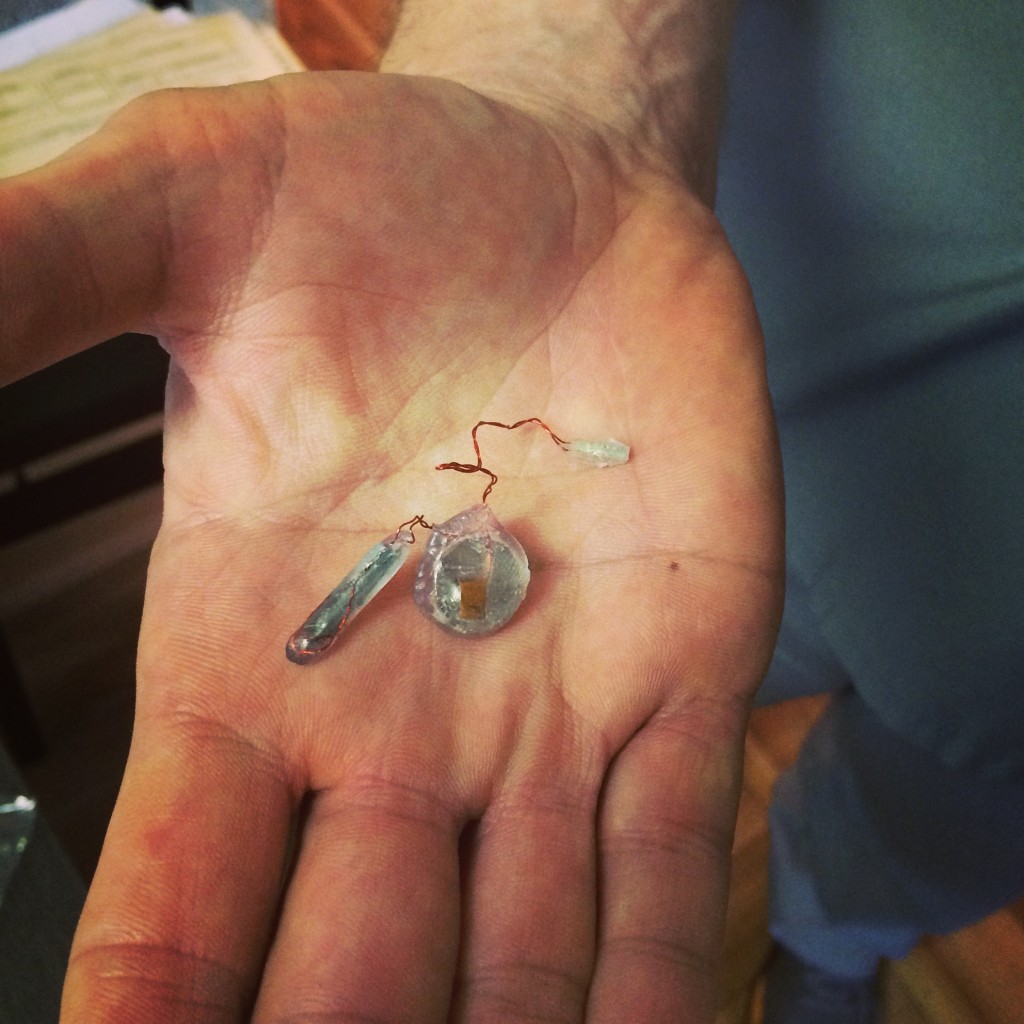 The next time I saw him, Dr. Nelson had mounted our device on a little plastic mold, that fitted to my molars. 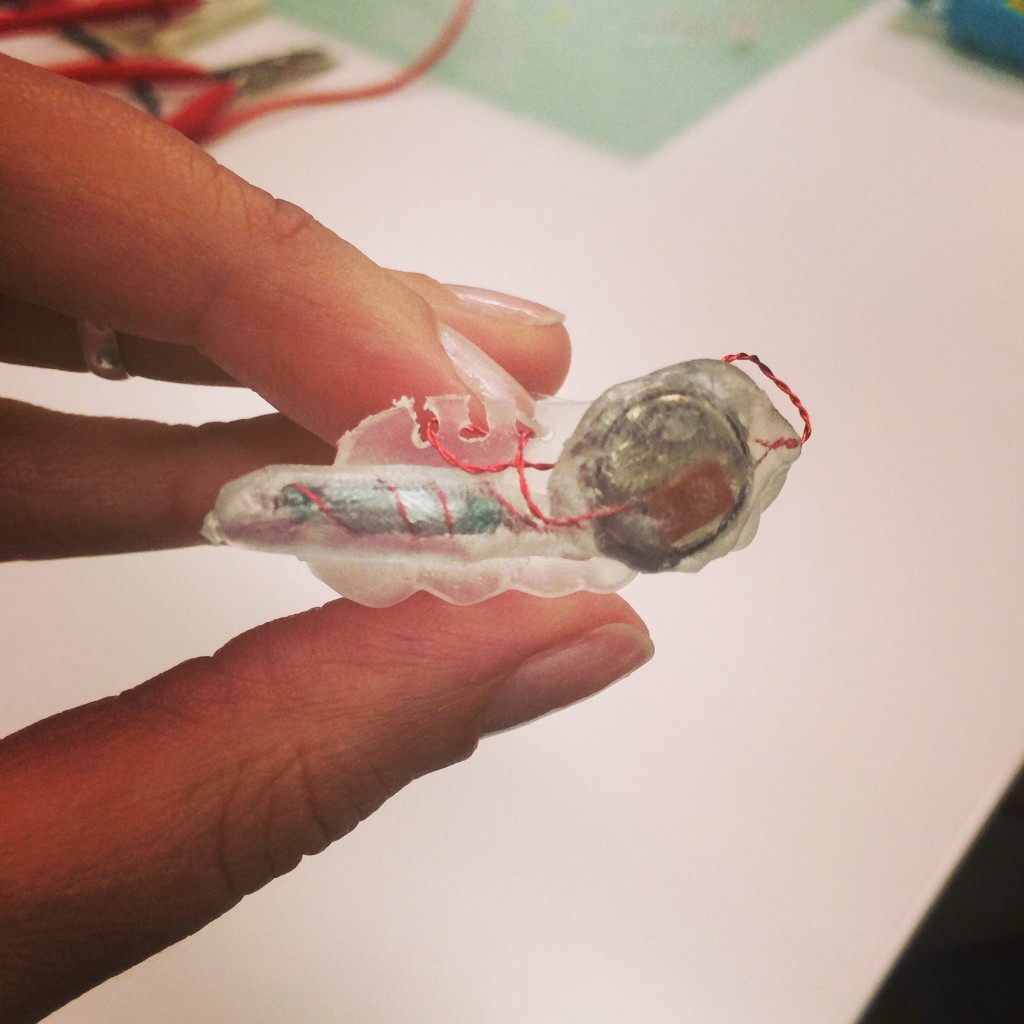 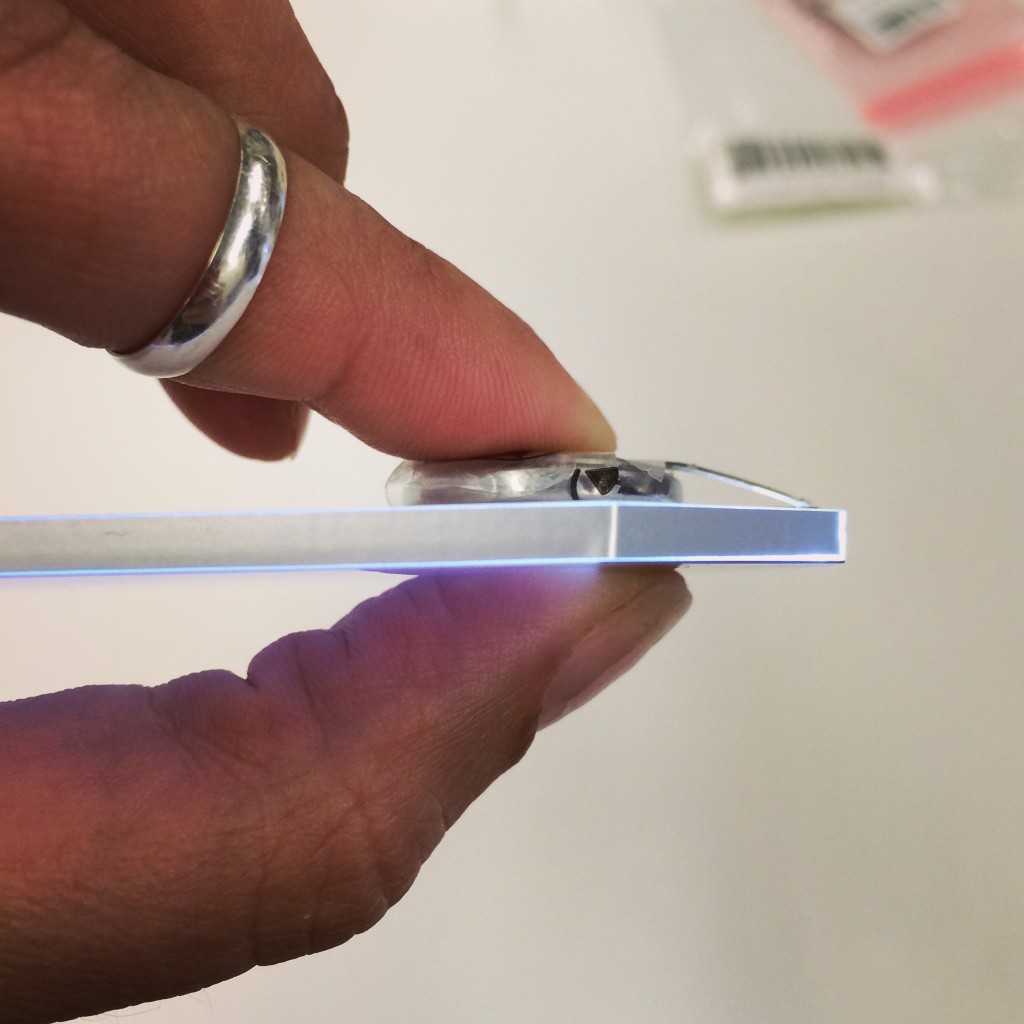 Next Adam wired up some LED panels for our sternums. They could be operated remotely by Arlo (Light Guy Extraordinaire). 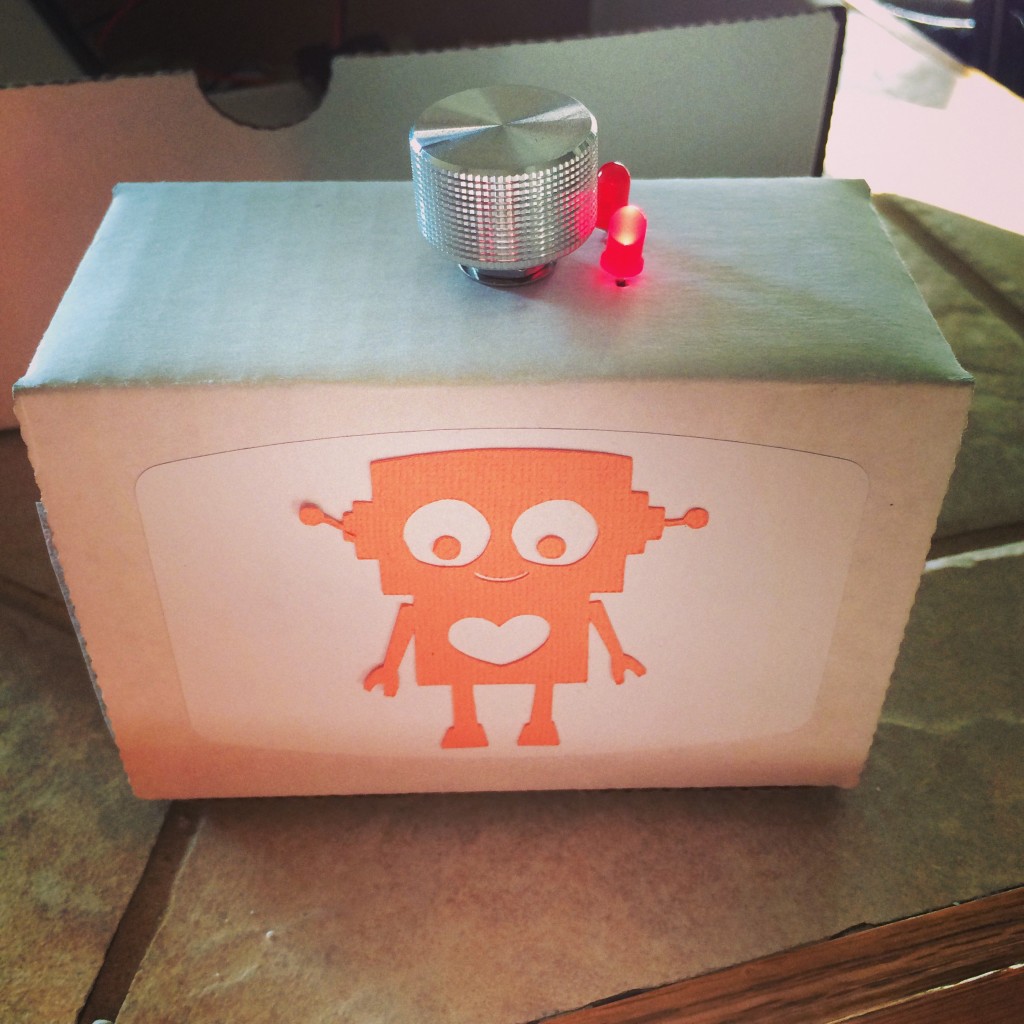 He rigged them up to a little box with dimmer switch so they could glow and fade with the swells of the music. 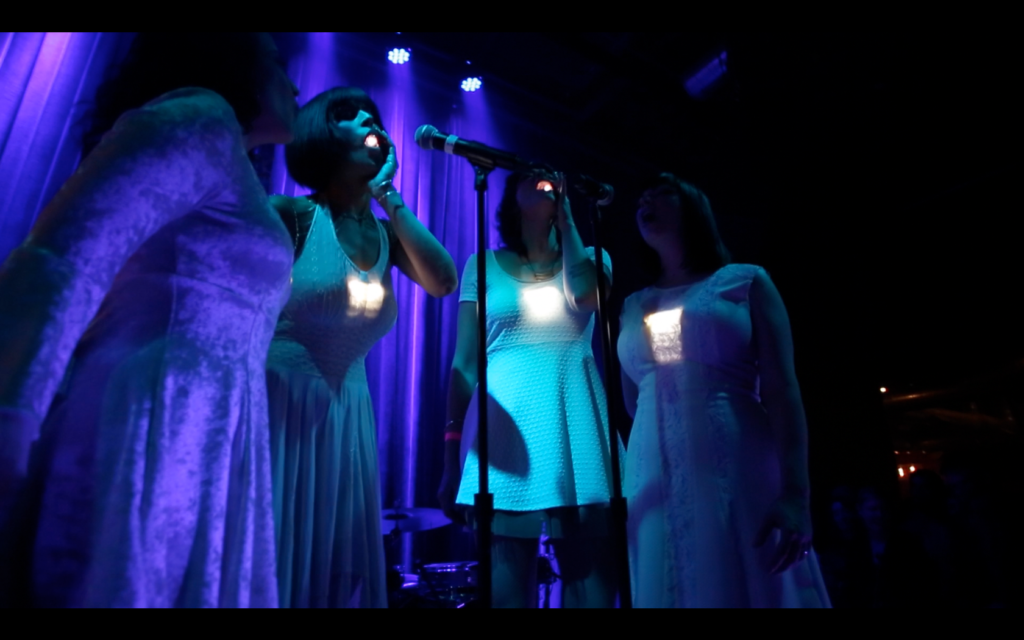 One of the most satisfying 20-minutes I’m likely to have on a Monday night. Thanks to Aby (who wrote “Hive” which we performed that evening), Ashley, Janey, Andy, Adam, Casey, Quinn for the Geisha make-up, and Laura of the Apiary Salon for the last-minute haircut backstage.

The next adventure is just over the next hill. Doomtree’s All Hands drops on January 27th and we’re steady scheming. New music, big tours, custom dessert foods (seriously). If you haven’t had a chance to preorder the record, you can check out the packages here. There’s stuff that glows in the dark, there’s extra music, there’s colored vinyl and there’s a tiny ship in a tiny effing bottle.