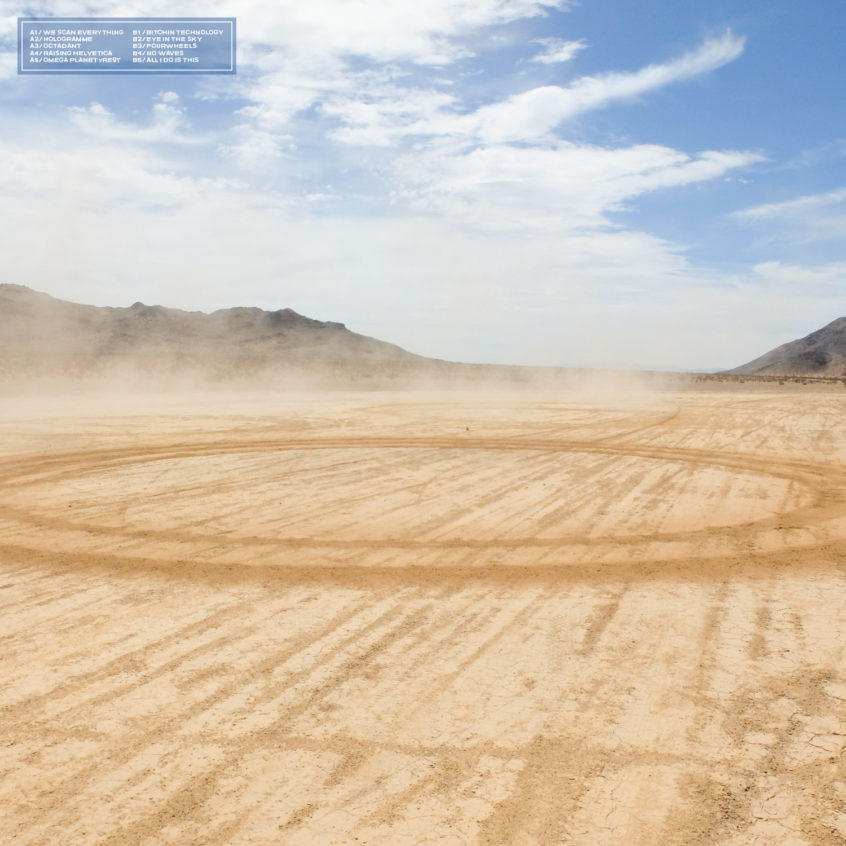 Welcome back to another outrageously packed edition of Tuesdays With Lazerbeak. Oh man. Today is a HUGE. NEWS. DAY. It brings me tremendous joy to announce the debut collaborative album from the creative powerhouse of Sims, Air Credits, and ICETEP. This project has been secretly in the works for many moons and it feels awesome to finally share the details with the world. Artería Verité is a ten-track futuristic onslaught with vocals by Sims and ShowYouSuck and production from ICETEP and the Hood Internet’s Steve Reidell.

This concept all started back in the end of 2016 when Sims worked closely with Minneapolis producer ICETEP on his monstrous More Than Ever record (“Brutal Dance,” “What They Don’t Know,” etc). After the release, Sims linked up for a national tour with Chicago’s Air Credits (ShowYouSuck and Steve Reidell) and through the course of several studio sessions between Chicago and Minneapolis the album was born. Check out the sweet album artwork below. 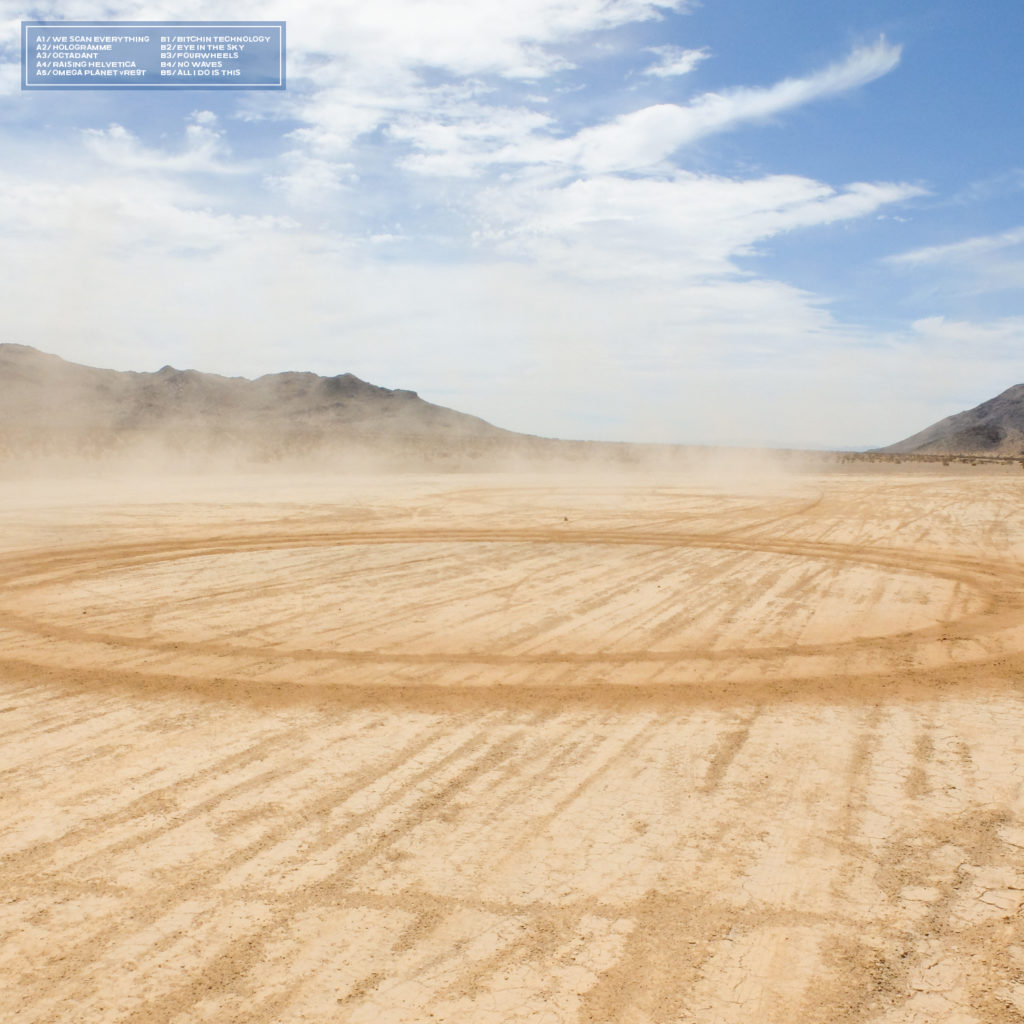 It’s hard to fully capture the depth and scope of this record in a blog post, so I’ll let the music do the talking for me. Check out the crazy futuristic video for electric first single “Hologramme” below, directed by Peter Angus Medlock. That should give you a good idea of the insane level these dudes are on right now. Shouts to HipHopDX for world premiering the vid this morning. Read all about what they had to say right HERE and help us spread the word by sharing this with your peoples.

Artería Verité is due for release from Doomtree Records on August 3rd, and you know it wouldn’t be a Doomtree release without an over-the-top pre-order. This album is no different. This time around we’ve got a super sweet Standard Edition and a totally bonkers Deluxe Edition to offer you. The Standard Artería Verité Pre-Order comes with your choice of CD or LP with printed lyrics, a custom 24-page zine with tons of photos and new writings, access to an Instagram Live Q&A with the group, and an immediate digital download of “Hologramme.” All for an incredibly low price. Check out the deetz below and grab yours right HERE. 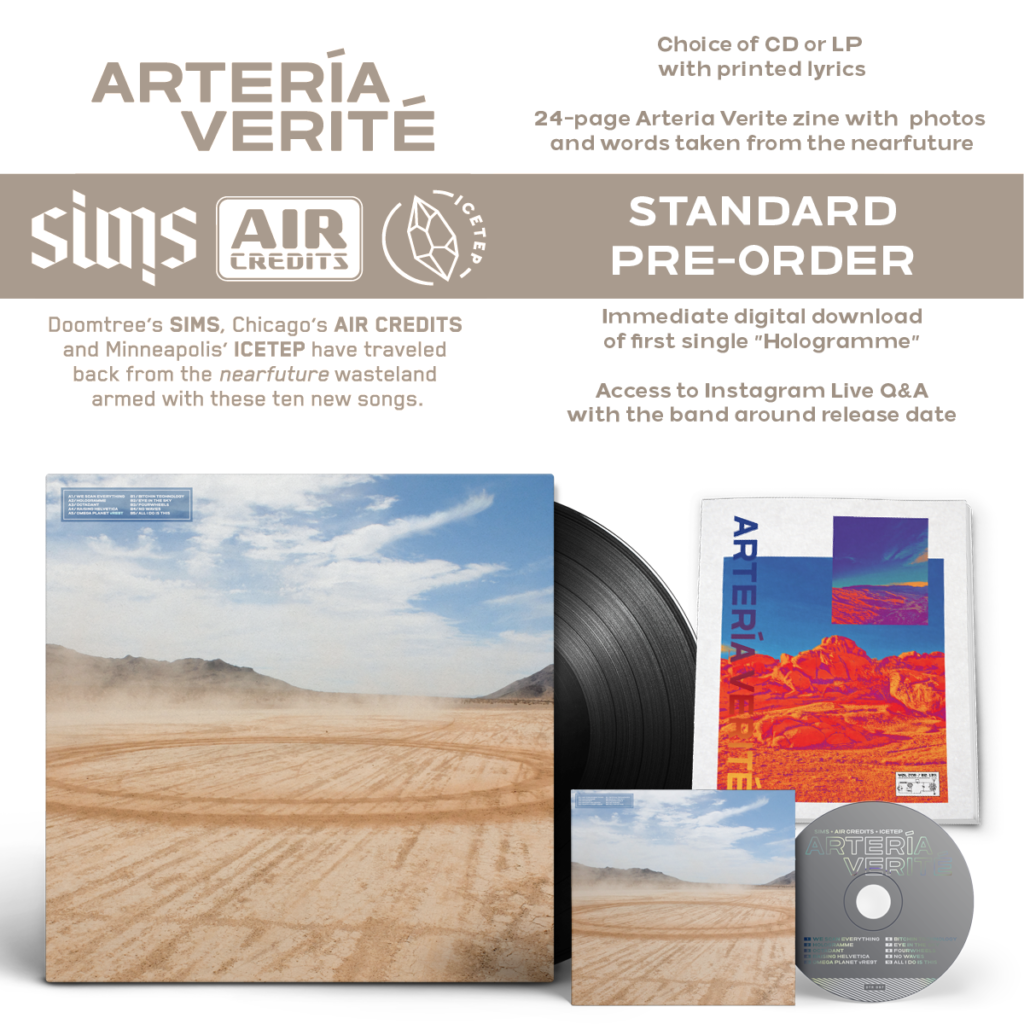 Super tight. If you really want to up the ante though, you gotta go deluxe. The Deluxe Artería Verité Pre-Order comes with all the amazingness of the Standard Pre-Order, plus a SIGNED copy of the album, as well as a ton of super limited custom items. You’ll get a limited Artería Verité t-shirt available in an exclusive colorway and designed for this pre-order only – made to order, as well as a sweet enamel pin and dye sublimation patch. Bad. Ass. Check it out below and grab your Deluxe Pre-Order right HERE. 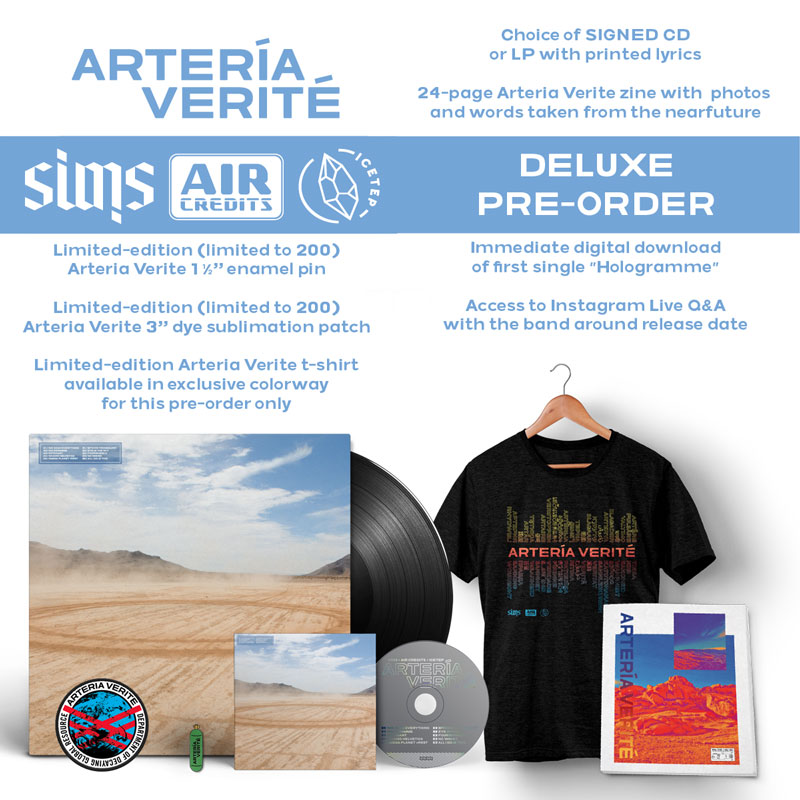 And if you’re less about the physical things and more about the digital media, we’ve got you covered as well. You can now pre-order the album from Bandcamp (HERE) or iTunes (HERE) and receive an instant download of “Hologramme.” And speaking of “Hologramme” (SEGUE!!!), here’s that song one more time in case you missed it up top.

BAM! Another new release announced and on the books. Please help us spread the news far and wide and stay tuned for tour date announcements and more music coming soon from Sims, Air Credits, and ICETEP. 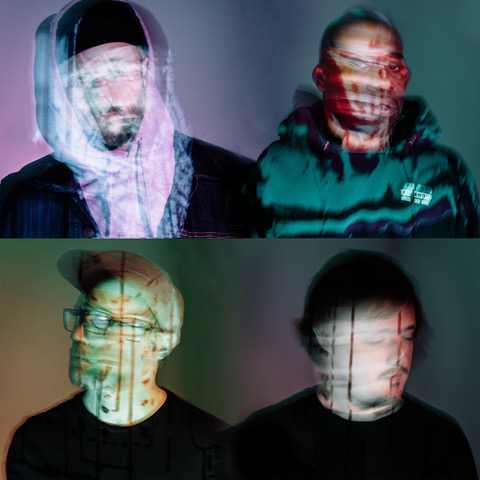 Now for a quick catch-up with Dessa, who’s a week into her current leg of tour and going strong. Dessa and the band crushed out the Southern run last week with epic shows in Nashville, Birmingham, Atlanta, New Orleans, and Chapel Hill and now they’re on to the East Coast. Here’s a couple of great recap videos of the Nashville and Birmingham shows from shooter extraordinaire Keegan Burckhard.

And here’s a few more shots from the road. Glad to see the show banners are still holding up. 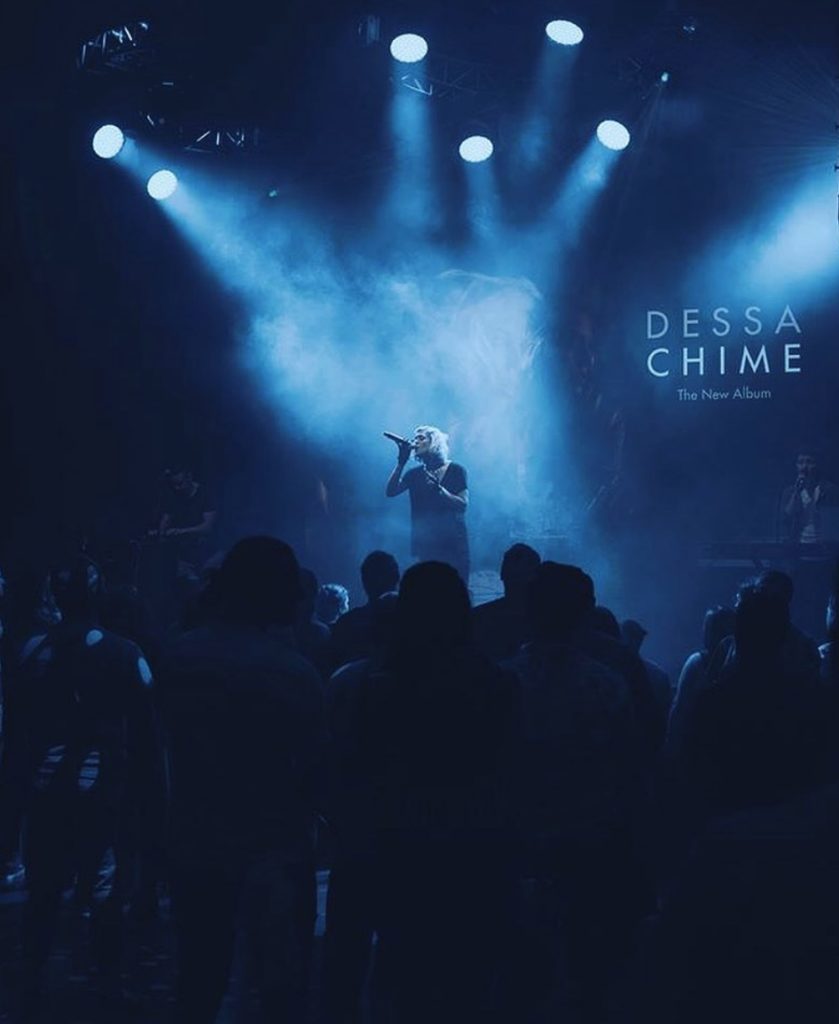 Matt, Kara, Dessa, Jonathan, and Saam with that death stare. This pictures makes me feel like I’m in trouble. 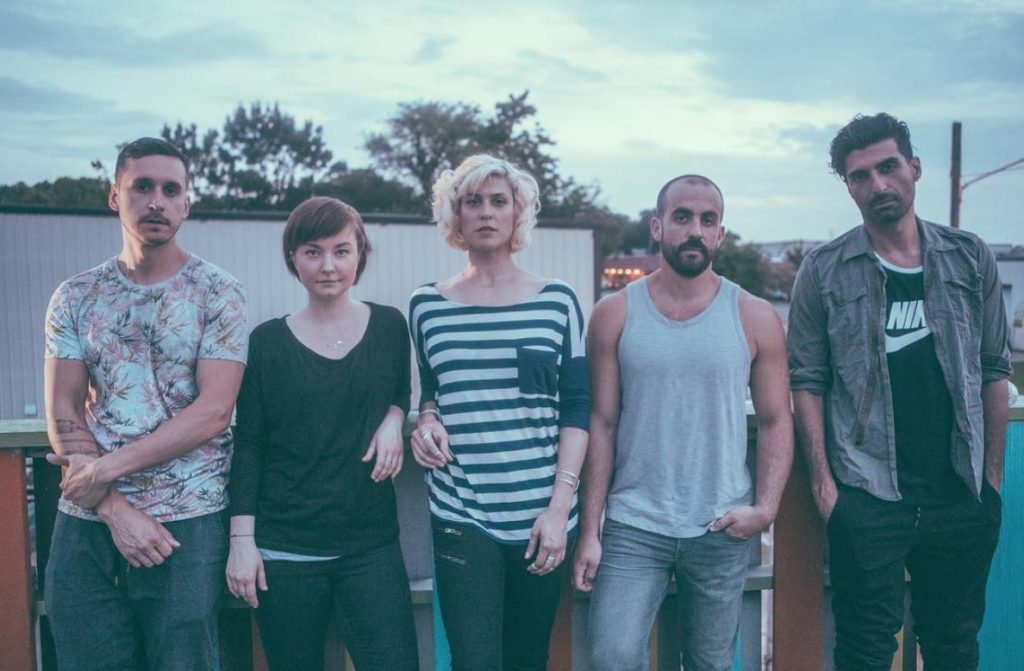 And a couple pics of the very mischievous Monakr dudes. 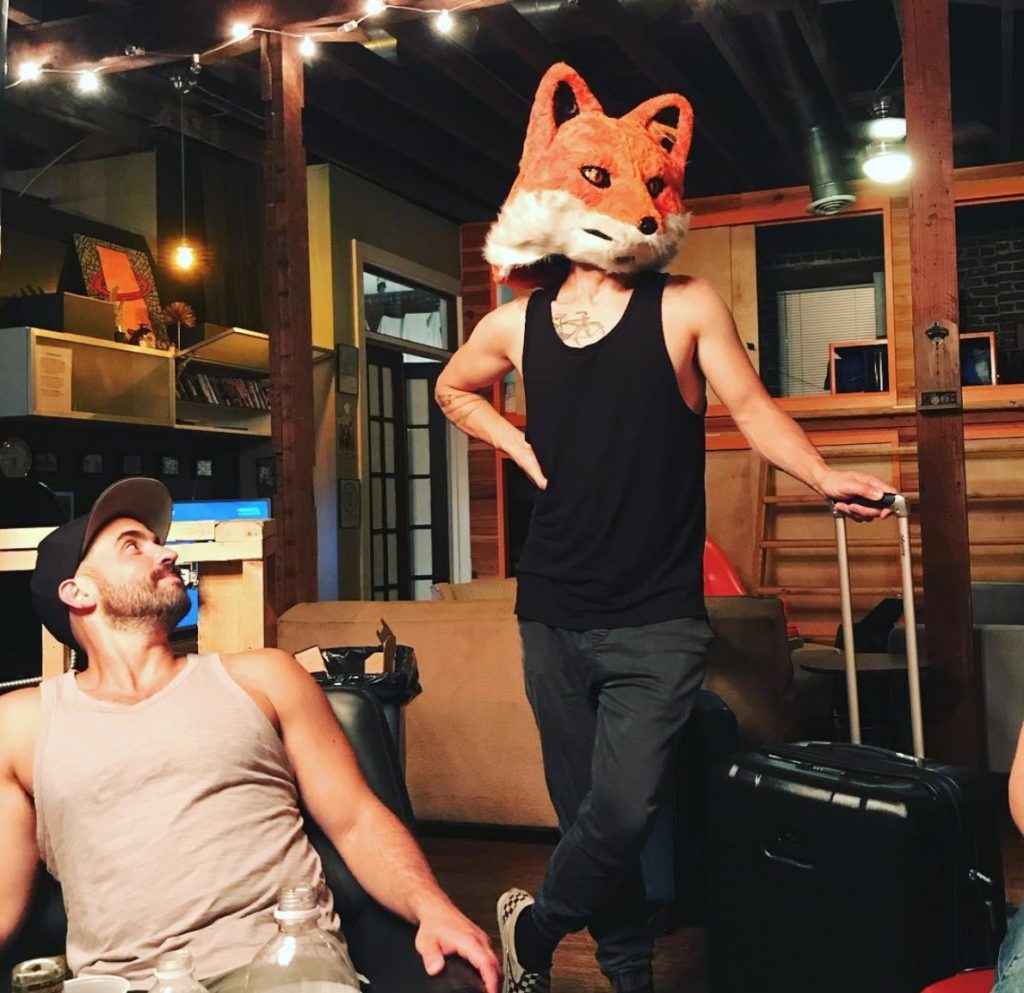 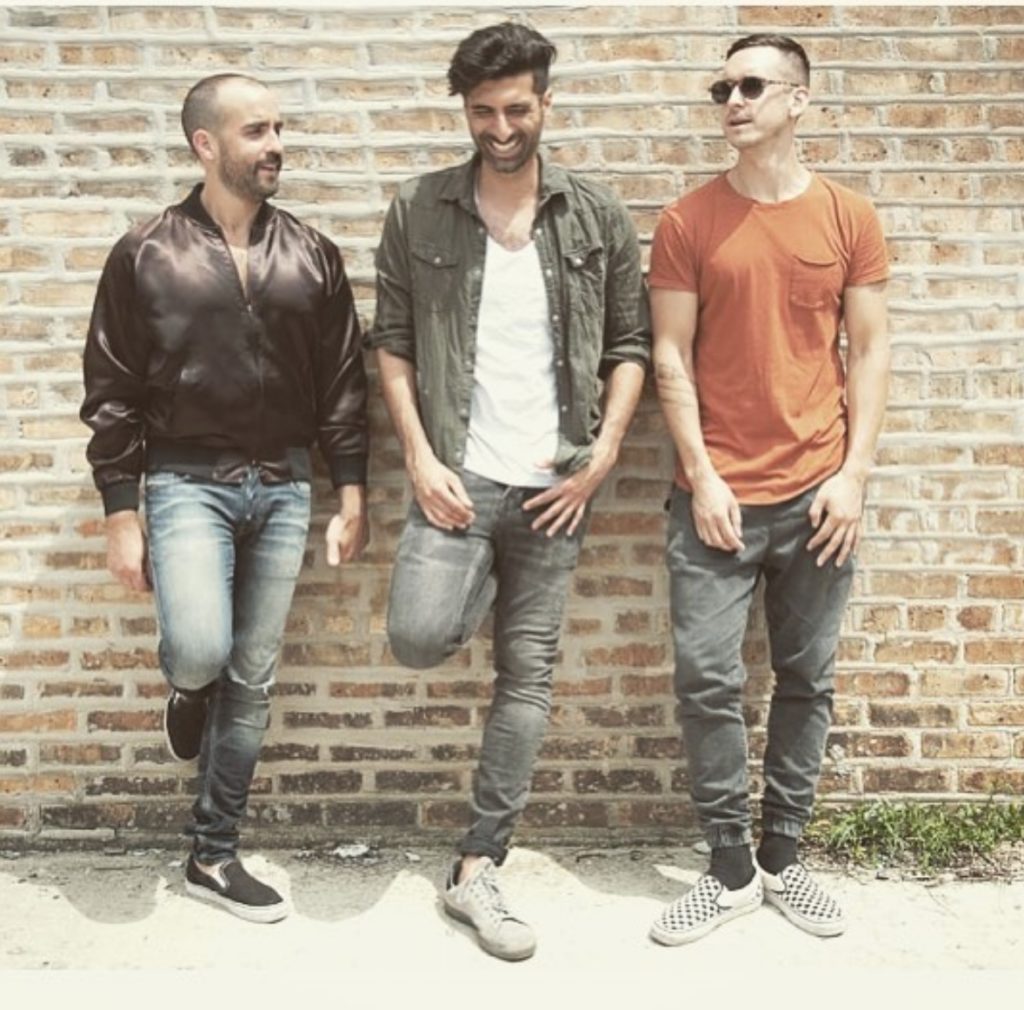 The guys will be hitting the East Coast hard this week, culminating in a wild show at Warsaw in Brooklyn. To celebrate the occasion Dessa is running an awesome contest that could get you backstage passes, drinks with the band, and your very own item added to the hospitality rider. Here’s Dessa to tell you all about it.

AMBITIONS AS A RIDER

If you dig Doomtree, you know that we run on word of mouth and pixie dust—friends telling friends about good music makes all the difference.

For my upcoming show in New York, I’m giving away a few special packages to say thanks to people who take the time to boost the signal.

Here’s the deal: text a friend about the show at Warsaw in Brooklyn on 6/29 and grab a screenshot of the exchange. Then post it to the social platform of your choosing with the hashtag #DessaInBrooklyn. (Style points will be awarded. I have a soft spot for haikus, for what it’s worth.)

We’ll be picking one post from Twitter, one from Instagram, and one from Facebook to win a pair of backstage passes to the show at Warsaw. Winners will meet the band, watch the soundcheck, grab a pre-show drink, and EVEN GET AN ITEM ADDED TO THE OFFICIAL RIDER. (Think granola bars, not Moet, my guys.) We’ll print off the rider and sign it to prove it’s the real thing. 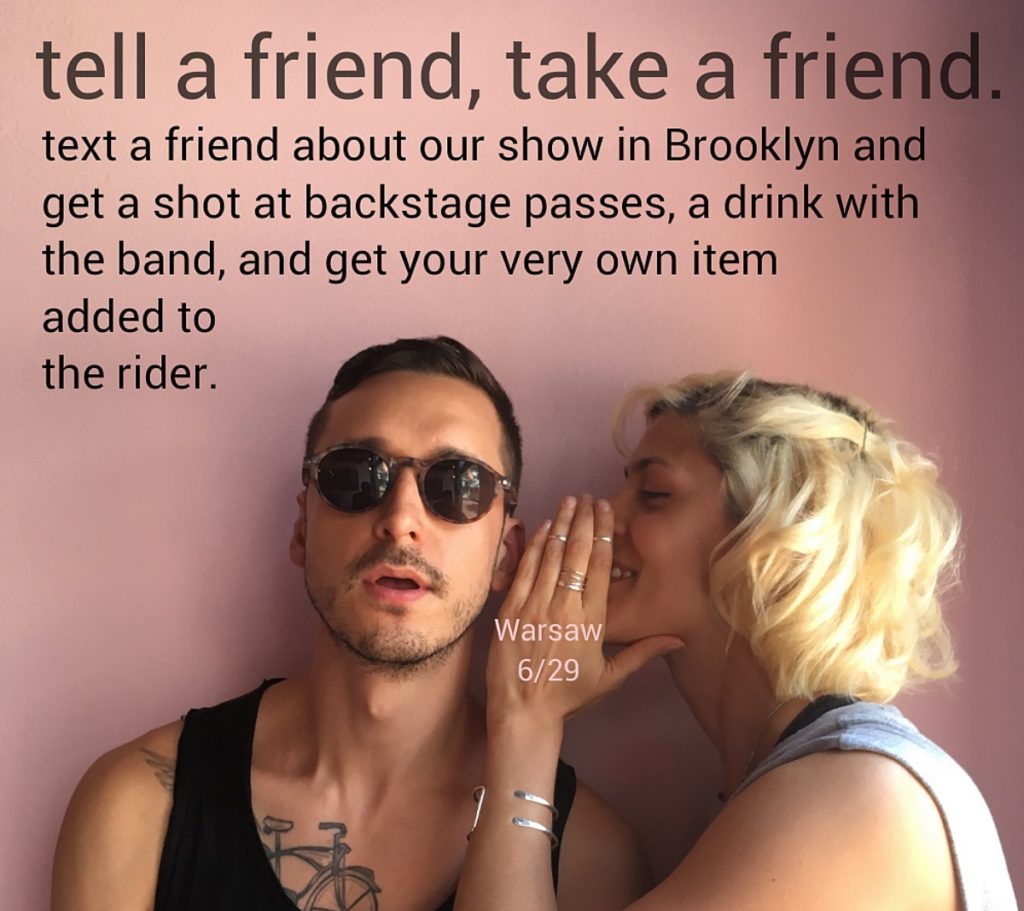 BOOM! Let your NYC people know about the contest and get your texts up. You can check out the rest of the tour dates below, including stops in Philly, Boston, Brooklyn, and Columbus this week. Get those tickets right HERE. 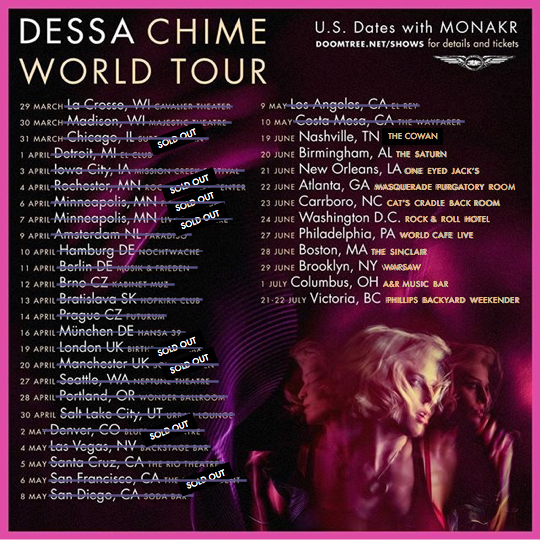 And speaking of tours (SEGUE II), Dessa has just announced her first book tour in support My Own Devices this September. She’ll be making stops in legendary bookstores across the country for signings and readings. Check out the dates below and grab your tickets HERE. 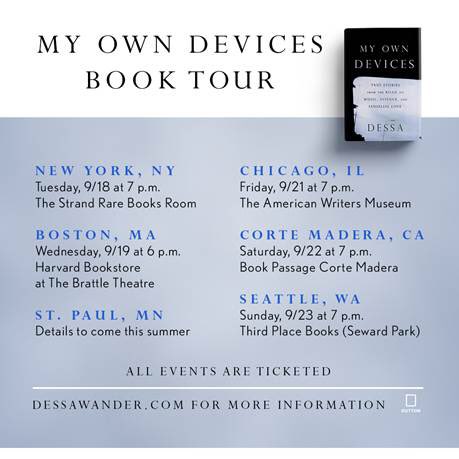 I wanted to take a second to say thank you to everyone who has been supporting and bumping this new Longshot and Lazerbeak album since it came out earlier this month. Big time shouts to Chris Reimenschneider at the Star Tribune who just recognized Parades as one of the 10 Best MN Albums This Year. Check out the write-up below. Chime made the cut too! 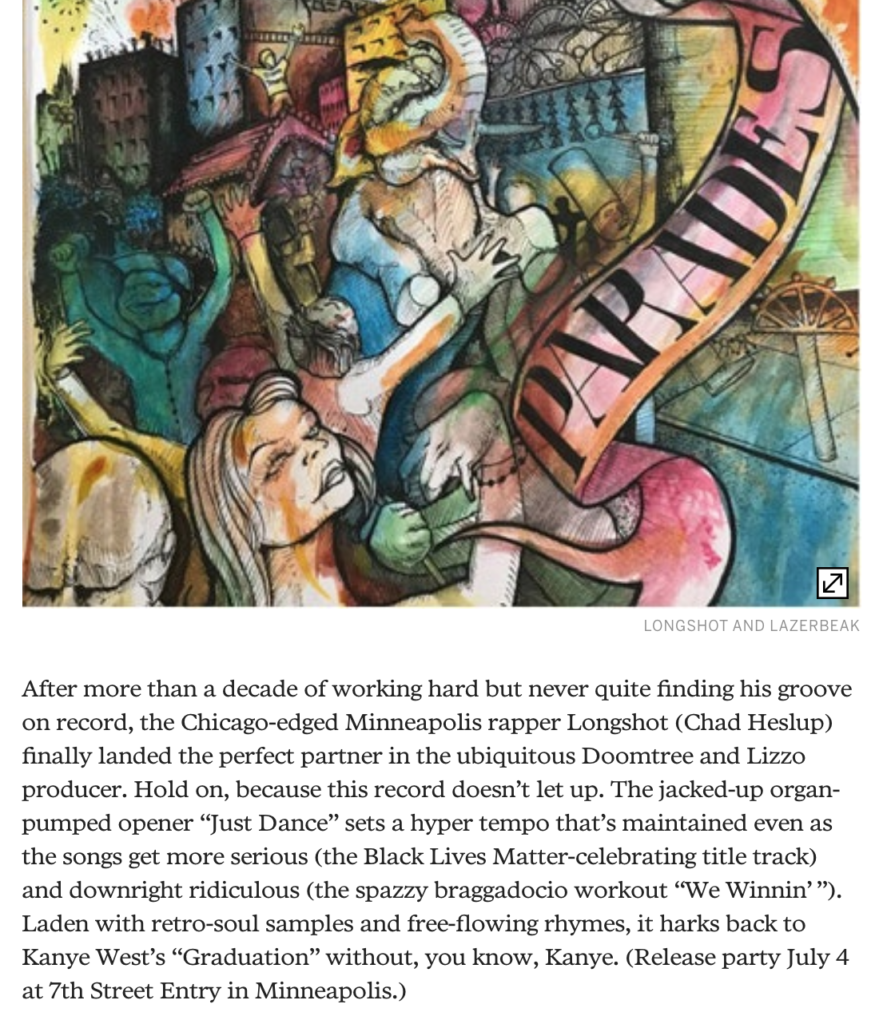 Shot and I have been hard at work getting everything together for the big hometown Parades release show next Wednesday JULY 4TH at the legendary 7th St Entry. Here we are last night burning the midnight oil with drummer Mo Bluntz. 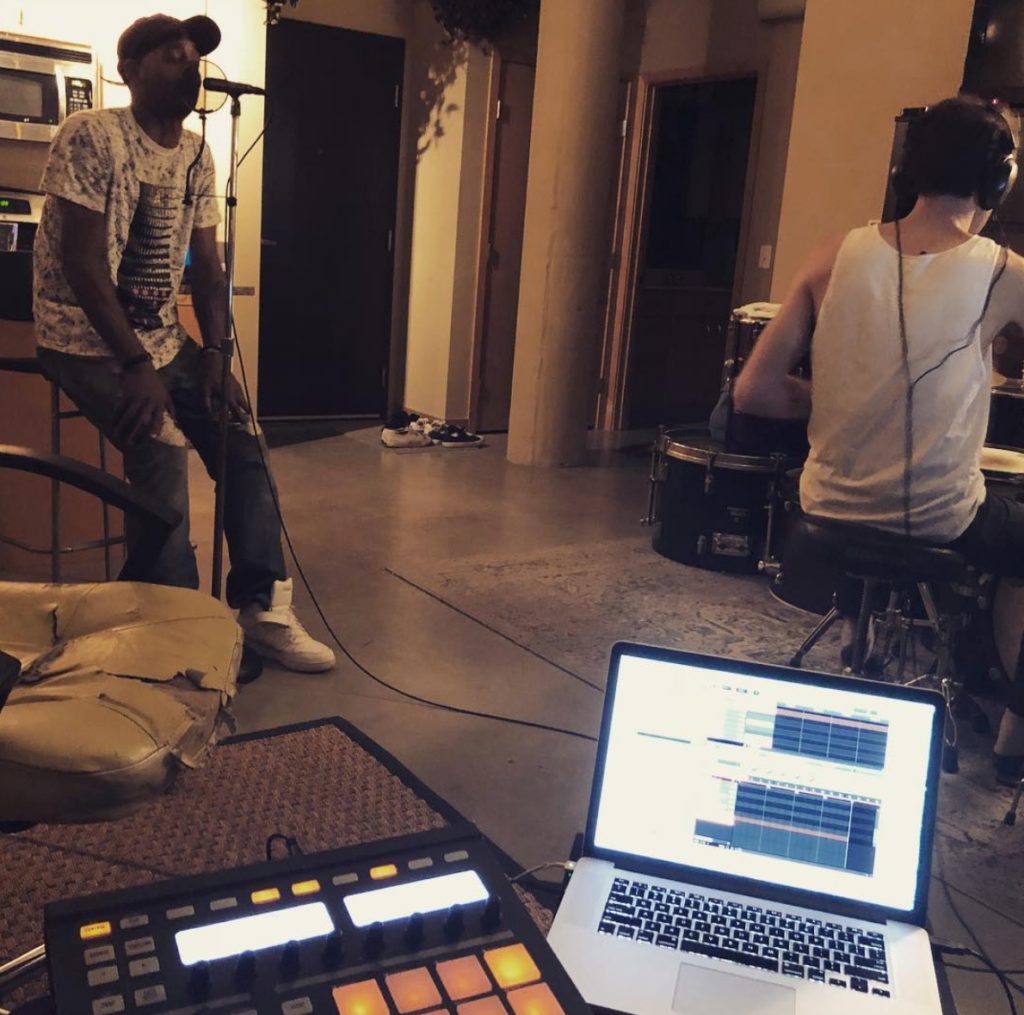 This show is gonna be one for the history books. We’ve got performances from Holidae, Angel Davanport, Purple Orange Beach (new P.O.S techno project), and Metasota, on top of the headlining debut show from me and Longshot. Check out all the details below and grab your tickets right HERE. End your 4th of July with a bang and come party with us!

And if you happen to be around the Twin Cities tonight, we’ve got the Legend God Sophia Eris rocking the guest DJ slot at Surly Brewing’s Summer of Sound series. Sophia will be playing all her favorite jams in the Beer Hall from 7-10pm. FREE.99 and open to all ages. Go get some awesome food and beers and take in the splendor. 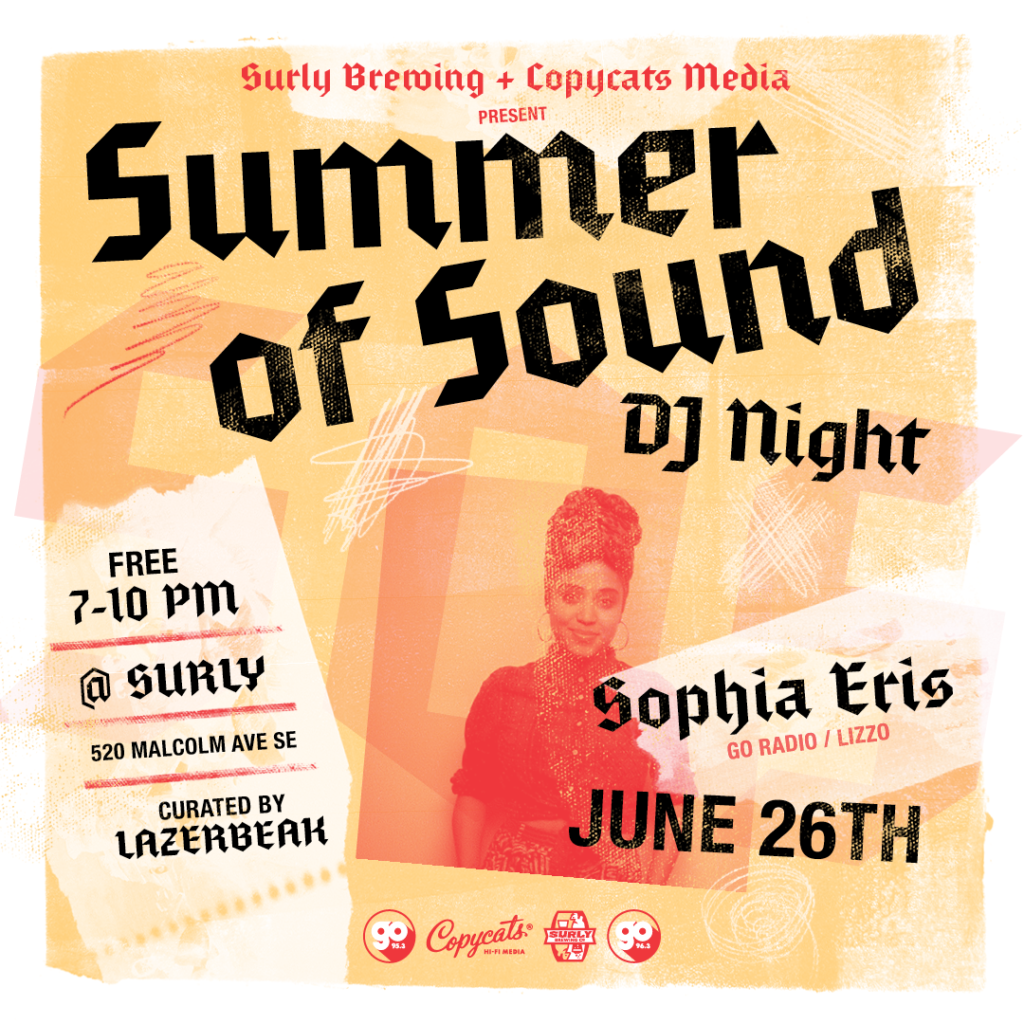 Alright! That does it for this post. Make sure to grab that Sims x Air Credits x ICETEP pre-order and help us get the word out. I’ll leave you with this brand new “Hologramme” video one more time just to drive it all home.

I hope you have a wonderful week and I’ll see you back here next Tuesday for another round of TWL!