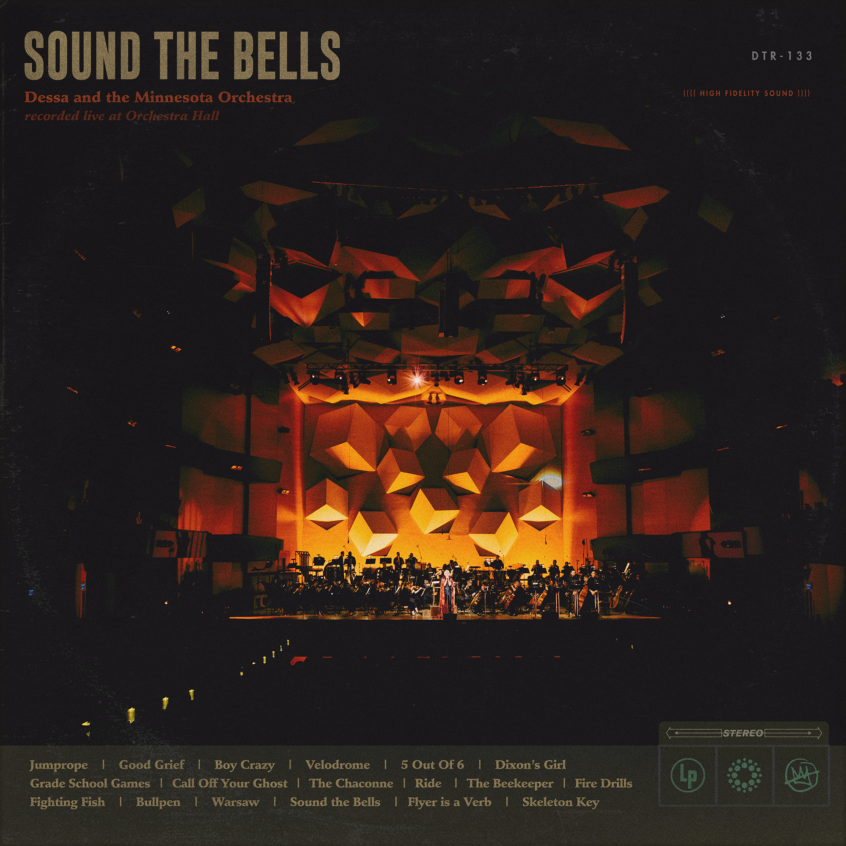 Hey there! Welcome back to an absolutely overflowing edition of Tuesdays With Lazerbeak. August is almost over already and that means that the brand new Shredders album from P.O.S, Sims, Paper Tiger, and myself will be released THIS FRIDAY, August 30th, on Doomtree Records. Grace and Doug at the Doomtree Webstore have been feverishly packing up all the Standard and Deluxe pre-orders that have come in so far. There’s still time to grab yours and get all sorts of sweet limited gear like one-off t-shirts, shades, sticker packs, guitar picks (shredding, duh), and signed albums. There are actually only a handful of Deluxe packages left at the moment, so check out the full spread below and grab your right HERE while you still can. Enormous thanks to everyone who has been supporting the project, ordering the album, and spreading the word. Team The Best Team! We appreciate you.

The @shredddders #GreatHits pre-order goodies are rolling in!!! Grab yours at store.doomtree.net. All orders placed by tomorrow night receive early shipping. Doooooooit.

While you wait out these next couple of days for the full album, you can catchup on the handful of heat knockers of that we’ve already released from Great Hits. Check out “Vanilla ISIS,” “Suburban Base,” and “Ayeyayaya” below and pass them along to a close friend or family member. On a personal and somewhat cheesy level, I’m just so damn proud of this new music. The first Shredders album felt like the four of us just trying out new things and learning how to work as a more stripped-down unit. Great Hits actually feels like we’re a real band, firing on all cylinders and playing to each others strengths like never before. We’ve been honing in on this sound over the past few years now and I couldn’t be more excited to share all the new jams with you. PUMPED.

And don’t forget about the new Shredders Hotline we’ve set up for you to call in and request a topic for us to riff on in the upcoming season of Does It Shred. Just dial 1-833-DOES-IT-SHRED, leave your name and city, and throw out something for us to debate the shredddddddability of.

All four of us Shreddogs were down in ATL last weekend for the big GridLife motorsports and music festival and man, we had such a total blast. I had no idea that we would actually get to ride on the track with some of the top Formula Drift racers in the country. Pretty sure my adrenaline is still peaking at astronomic levels. Huge shouts to everyone at GridLife, and especially our drivers Vaughn Gittin Jr, Corey Hosford, and Ryan Litteral for getting us out into the action. Check these crazy vids out.

Speaking of upcoming releases (SEGUE!), last week Dessa announced the release date and album cover for her upcoming live record with the Grammy award-winning Minnesota Orchestra. It’s called Sound the Bells and will be released on Doomtree Records on November 8th. That’s the amazing album cover below courtesy of our ultimate homie and original Doomtree co-founder Kai Benson (akak MK Larada). Stay tuned as we roll out the official pre-order and some new music from this once-in-a-lifetime project later next month.

In the meantime though I’m thrilled to announce that the good people over at Dutton/Penguin Random House have just released the paperback version of Dessa’s first memoir My Own Devices. You can now pick up a lighter, less expensive copy of the instant classic for a friend, book club, or classroom. Check out the fresh new copies below and grab one right HERE from the Doomtree Webstore.

The first paperbacks. Posted up at @magersandquinn, signing @doomtree preorders.

Dessa is hitting the road this week for a few speaking engagements around the book release. She’ll be in Boulder today (Tuesday) and Minneapolis on the 31st before popping into The Book Cellar in Chicago on September 8th. Details below.

She’ll also be reuniting with her killer band for a string of dates throughout Colorado, Minnesota, Wisconsin, and Illinois over the next few weeks, including two big headlining gigs at the Minnesota State Fair. Check out all the dates below and grab your tickets HERE.

Tour starts this week. COLORADO. Then MN, WI, and IL. Tix at Dessawander.com.

And speaking of the State Fair (SEGUE II), Dessa’s brand new collaboration with Izzy’s Ice Cream is available for the first time at the Fair. You can try out Dessa’s Night Drive and also get your picture taken next to this creepy life-size cutout of Dessa. Scroll through the pics below for proof.

Here’s a little video on the making of this ice cream too, which I will refuse to endorse until someone drops several gallons of it off at my house.

Oh and if you happen to be at the Fair this Friday, August 30th, Shredders will be celebrating the release of Great Hits by playing a free short live set at the MPR stage next to the Grandstand at 3pm. Check out the full MPR/Current schedule below and come party with us! 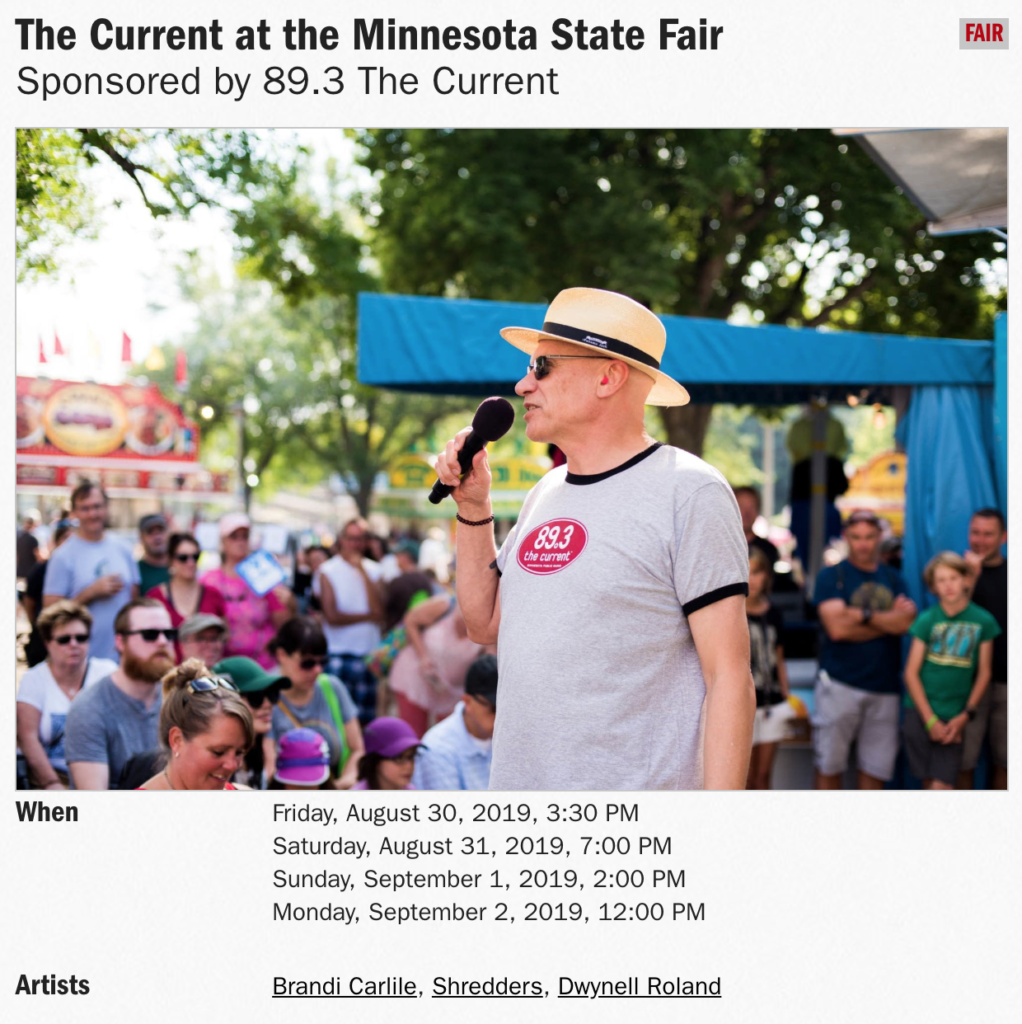 OK, that’s about it for Doomtree news this week. Running around getting Shredders stuff together today so no Bonus Jams this post, but I will leave you with my first-ever published work in a newspaper. Shouts to City Pages and editor Keith Harris for allowing me to air my grievances towards my incredibly abusive kids. Click HERE to read “The 12 Worst Ways My Horrible Children Have Insulted Me.” There are some real gems in there. 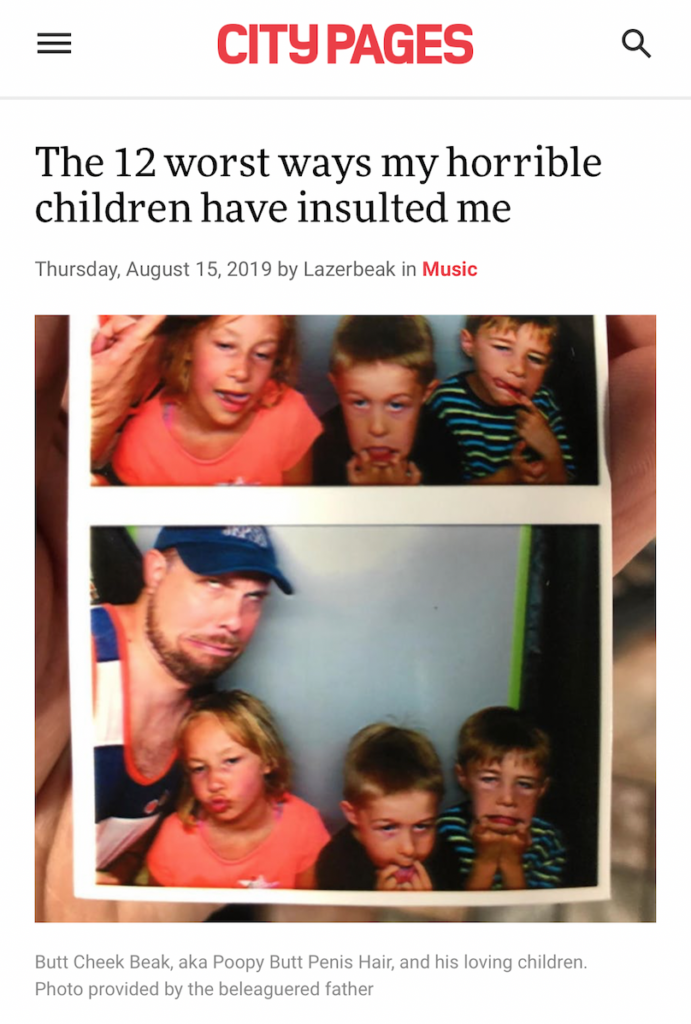 BAM! I hope you all have a wonderful last week of August and an incredibly relaxing long weekend. Don’t forget to buy/stream/consume/share that new Shredders album this Friday and blast it at all the barbecues. I’ll see you next Tuesday with another round of TWL!