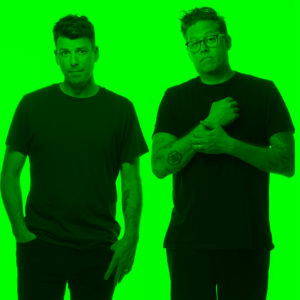 Cloquet, the collaborative duo of producer Paper Tiger and vocalist J.Gundersen, are back with the announcement of their upcoming sophomore album New Drugs and its powerful lead single “Breathing.” What initially began as a DIY file-sharing side project amongst friends quickly turned into a full-fledged band with the release of Cloquet’s 2018 self-titled debut album. Born out of a musical comradery and love for all things 90’s dance and indie rock, Cloquet merges the worlds of electronic and post-punk to create something equally urgent and reflective, a sound that lives just as perfectly on the dance floor as it does barreling down the highway on a late-night drive.

Paper Tiger got his start as a founding member of the Minneapolis-based Doomtree collective nearly two decades ago, producing several of the group’s biggest hits and working closely with bandmates Dessa, P.O.S, and Sims to help craft their own critically-acclaimed solo recordings. Since then he’s also branched out into television and commercial production, scoring the HBO documentary Rock In A Hard Place and carving a new musical direction with his own instrumental solo releases. J.Gundersen meanwhile has made a name for himself not only as a producer and singer/songwriter, but also as an in-demand motion graphics designer. The two met while working together on several multimedia design and visual projects, including several music videos for Doomtree, and instantly bonded over their shared affinity for 80’s and 90’s dance music.

While Cloquet’s debut album was created side-by-side one another in tiny studios and bedrooms throughout Brooklyn, 2019 saw Gundersen make a cross-country relocation to San Francisco for work, forcing the two to completely transform the way they go about collaborating. They quickly found inspiration in the challenge of FaceTime calls and shared Dropbox folders, and a new batch of songs rapidly began to emerge from both coasts. Gundersen channeled his isolation and the feelings of being uprooted into some of his most poignant and relatable lyrics to date, going deeply inward to find a light in the dark; and the previously shared time in New York helped Paper Tiger intricately build the earnest and lush production around Gundersen’s voice, finding a more unified and effortless sound than ever before.

In a way you could say that the great physical distance between Paper Tiger and J.Gundersen brought Cloquet closer together than ever before, an idea that’s even more amplified by the confusing times that we’re all currently living through together. The songs on New Drugs speak to the everyday struggles and nuanced adversity that we each walk through in our own daily lives. They’re the perfect soundtrack to this new shared human experience, one that’s equally filled with joy and sorrow, darkness and light, bangers and slow jams.