Night Stone is the new electronic project from veteran producers Lazerbeak and ICETEP. Both artists have spent the last decade building a bulletproof discography of credits – Lazerbeak with everyone from global sensation Lizzo and bluegrass legends Trampled By Turtles to the Grammy-winning Minnesota Orchestra, and his own Doomtree crew; and ICETEP with Chicago’s first lady Psalm One, indie-rap behemoth Astronautalis, and singer / rapper / renaissance woman Dessa.

The two began working together on various Doomtree projects in 2015 and instantly bonded over their shared love for French house, electro, and techno, musical territories that neither producer had ventured into previously. What began as a shot in the dark quickly evolved into a sound all their own, mixing highly melodic instrumentation with dance floor-ready beats and a nod to the 90s R&B they were both raised on to create an uptempo and supremely joyous soundtrack.

Once the instrumentals were in place, Beak and ICETEP realized there was still something missing and went off in search of the perfect guest vocalists to add the urgency and harmonic clarity the album was missing. Enter Sophia Eris, Lady Midnight, Channy Leaneagh of POLICA, and MMYYKK of astralblak, the four cornerstones of Night Stone’s self-titled debut album. Sophia Eris, who moonlights as Lizzo’s official DJ and hypewoman, throws down confident bars and affirmations on four of the album’s bubbliest bangers, while neo-soul slayer Lady Midnight adds a lyrical depth and spiritual energy reminiscent to the project reminiscent of peak Sade. Then there’s MMYYK of Afro-future funk all-stars astralblak, who mixes mantras and self-love proclamations with a voice as mountainous as the man himself, and Channy Leaneagh of electro-pop kingpins POLICA who lends her ethereal voice to the appropriately titled “Night Rider.”

The beats on the other hand, influenced just as much by classic production duos Cassius and Daft Punk as they are by the synthy quiet storm of legendary acts like Luther Vandross, New Edition, and TLC, manage to walk a fine line between a myriad of genres, all while keeping your mind and body moving in time to the intricate grooves. Polyrhythmic percussion and booming kick drums meet analog synthesizers, Chic-esque guitar riffs, and boisterous horn stabs in a triumphant tidal wave of sound, and the vocals from some of this generation’s most up-and-coming talents only help to ground Night Stone firmly at the forefront of current electronic music.

The debut album from Night Stone will be released by Doomtree Records on May 15th, 2020. 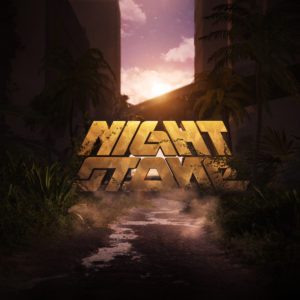