If you’re in an unsigned but promising band, mid-March means South by Southwest. And SXSW means tens of thousands of musicians, reporters, and industry reps descend on Austin, Texas.  There are skinny jeans and taco stands and streets papered with handbills. Sunshine and lost bandmates,  high hopes and public intoxication, old friends and new lanyards. It’s like a cross between summer camp, an epic talent show, and a plague of locusts.

And Doomtree will be there. In an RV. If you’re heading to Texas, or have friends in Austin, check out our performance schedule.

In other news (litrah-lee), Fox9 put ran an overwhelmingly kind story last week. Many thanks to Trish and Ron for the coverage.

Just this morning, I decided to start an informal, one-sided rivalry with Mr. Ryan Olson—who you probably know through his masterminding in Gayngs and Marijuana Deathsquads. Everytime I turn around lately, Olson–ever cavalier–has been one-upping me.

I was asked to write a little nightlife column for Mpls.St.Paul magazine this month. I jumped at the chance, always excited for a writing gig. I pick up the March edition and eagerly flipped to my page–only to find that Mr. Olson has also written a piece. And that his piece is accompanied by a color photograph.

Whereas Mr. Olson is referred to as a “charismatic recluse,” I am described as a “nerd.” While true, I can’t let this sort of affront stand unanswered. 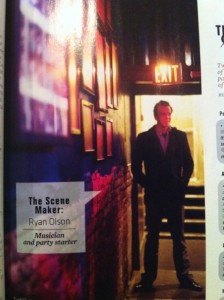 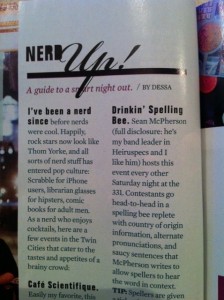