Just got back from a big long weekend in the Chi attending my Grandpa’s service.  My extended family is spread out pretty far and wide across the country, so it was great to be able to see so many wonderful people and catch up over the weekend, all while celebrating the life of the one and only Guts Mader.  My cousins are awesome.  It was a wonderful service too.  I got in late last night so I didn’t really have a chance to prepare anything for the blogosphere.  I am making a lot more progress with this Lazerbeak solo album though, so maybe I’ll just catch you up on all of that for the time being…..

Last Thursday I spent all day at the Hideaway Studio with Joe Mabbott for the final mixing session of the record. Everything went great and I feel super confident that the album is a wrap musically.  My friend deVon (aka dVRG) even came in to lay down some sweet rhodes lines.  It ruled, he killed it.  Below is a pretty low quality picture of him ripping it up, and you can click on the following link to see a short video of it: deVon rhodes video. 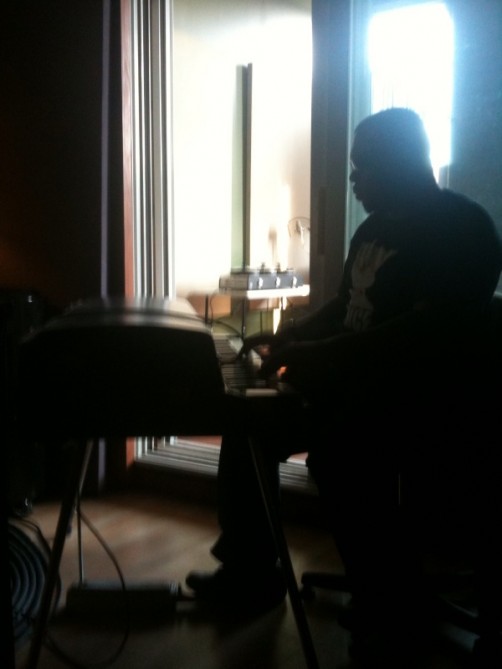 Other than that it was just a matter of working out all the little kinks and tweaks to help me continue to tolerate these songs.  Usually at this point in the “making of an album” stage I start to despise the songs a little because I’ve heard them each about seventy trillion times.  Even the slightest kick sound being not quite right will drive me insane.  So the final mix day is super important.   It always makes me feel a lot better about the project.  And man do I feel awesome right now.  Here’s a picture of what it looks like when all of the mixing tweaks get handled.  One of the greatest joys in this life for me is crossing things off a list.  Bam, mission accomplished. 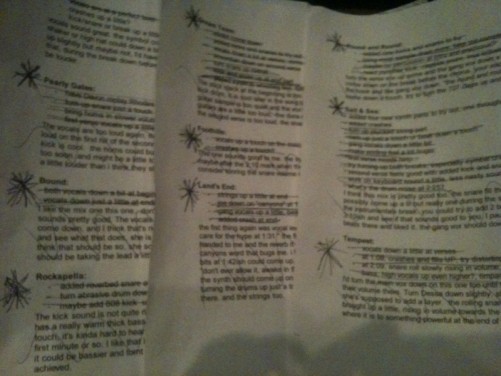 So yeah, the mixing of the album is done and I’ve come up with the song sequence too.  And at this moment in time at least, I don’t hate this record.  In fact I might be totally in love with it, and I’m extremely excited for people to hear it.  As much as it would rule to put it out right now though, it’s looking like a late summer release is a lot more realistic in order to really push it right.  I can live with that, summer’s gonna fly by anyways.  Hopefully I can leak a track or two on here a bit earlier too.

So at this point we move into the next phase: VISUALZ.  The fun stuff.  I’m meeting with my ultimate homie Matt Scharenbroich today to start diving in to all things album artwork and music videos, and I’m way pumped about it.  He’s the drummer in TPC! and did all the artwork for almost every single one of those records.  You can check out his website HERE .  I’ll keep you posted on how everything is turning out for sure.

For now I leave you with a fantastic Bonus Jam from Joey Scarbury, because I feel so free right now.  Ha!  Have an incredible week big duns.