Wow, what a sweet weekend.  Paid Dues Festival went down last Saturday and the whole crew was there to perform and take in the entire massive event.  I’m still catching up on sleep and trying to recount all the awesome things that took place, but for now here is a brief recap of what transpired, along with a handful of pictures I was able to take (still working on getting  better at taking more).  I have to say that I love the west coast more and more every time I get a chance to get out there, and this trip was no exception.  I definitely won’t forget it anytime soon, and I had an absolute blast running around all over the place with my ultimate homies.  So glad it worked out for us to all be out there together .   Anyways, here’s a short rundown of the weekend.

We all met up and headed to the airport on Friday to make our voyage out to L.A.  We actually got there early enough for me to cross off one of the many things on my bucket list: drink a beer at an airport bar.  Dessa, Sims, Stef, and myself all posted up at this place called The Wharf to have a celebratory drink before takeoff, and it was glorious.  I get pretty anxious when it comes to flying, so it was nice to cut the edge a little and relax before the big flight.  Nice view of the security check in as well. 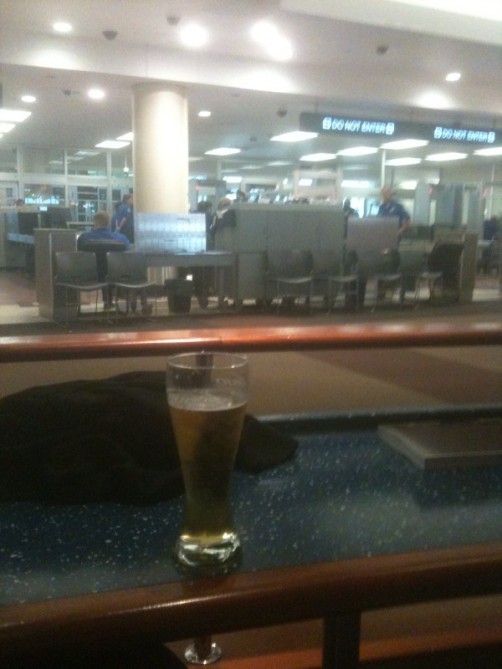 Being calm and relaxed definitely came in handy later on too, because I got seated next to a woman who within the first fifteen minutes of the flight changed her baby’s extremely dirty diaper RIGHT NEXT TO ME (I’m talking poo inches away from my kneecaps), and then just shoved said diaper right into the seat slot in front of her that holds the Sky Mall magazine, like it was nothing!  I guess I’m not that familiar with airplane baby etiquette, but I assumed that when these things happened you at least took the poor child into the bathroom to clean up.  No sir.  I’ll spare you any more details, but let’s just say it was quite unpleasant.  Not the best way to start off the trip, but we eventually made it into L.A. and got to hang with some homies out there before driving our rented minivan out to San Bernardino to crash for the night.

Got up early and headed out to Paid Dues to get our merch tent set up and check in.  The whole day ended up being completely awesome!  Weather was perfect, people were super friendly and responsive, and being in the presence of all those amazing artists was an honor.  Our set went great and from what I could tell the crowd was really into it.  It’s really  hard to cram five solo emcees work plus a bunch of crew songs into a 30 minute set, but I think we pulled it off and were shown a lot of love in return.  Here’s a picture I snapped from stage during the last song. 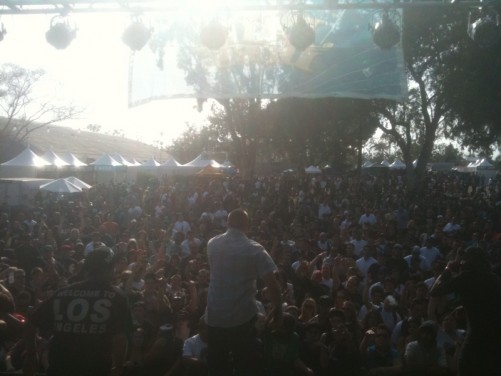 The best part was that our work was done by the middle of the day, which meant we could all run around like little kids and watch some of our favorite rappers shut it down.  Tha Dogg Pound was insane, they even brought out Lady Of Rage for two songs during their set!  Plus I got to see Del and Jay Electronica.  Ice Cube stole the show though for me (although I heard from people that Tech N9ne destroyed as well).  I’d never gotten a chance to see Cube perform before, and he definitely did not disappoint.  I was super far back for his set, but still tried to snap a picture of the enormous inflatable Westsiiiide hands that adorned the stage.  They’ve got to be some of the most innovative stage props known to man. 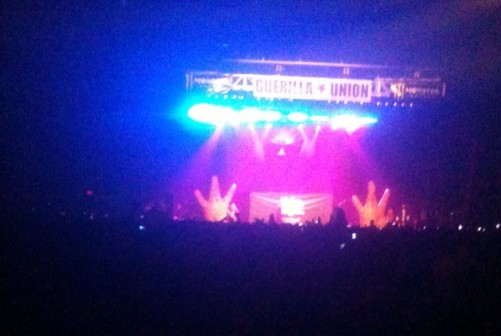 Such a great way to end the night.  Can’t thank Murs and Guerilla Union enough for inviting us out and allowing us to be apart of the whole thing.  Hopefully we can do it all over again next year.

Sunday we slowly made our way back home and ran into this friendly horse during our layover at the Denver airport that seemed to take quite a liking to Dessa.  I’m thinking this should definitely be the cover of her next album. 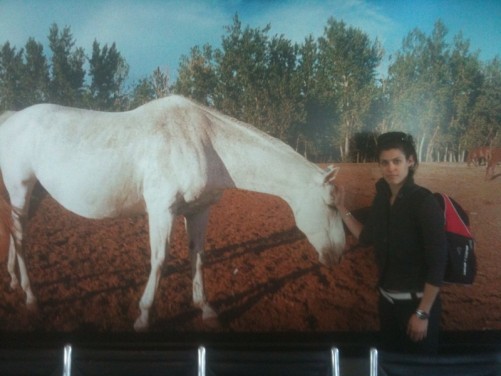 As much fun as the whole weekend was, it’s always nice to make it back home to Minneapolis.  Sims and I took this picture once we landed on our home turf, in a celebration of the Vikes and the beautiful city we call home.  Mission accomplished.  Now that I think about it, this could be in the runnings for our album cover as well. 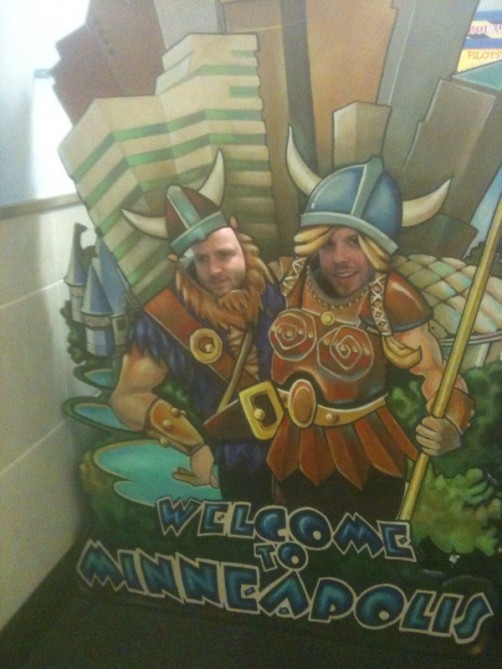 Oh and if you haven’t heard it yet, check out this blazing hot new Sims track called “Here I Stand.”  It’s the Bonus Jam for this week.  He went in over the beat to “Do Not Stay” that I made off of False Hopes XV.  It is absolute flames in my opinion.  Just a little something to tide people over before we drop the record.  Have a great week.  Next Tuesday it is.