Less than one month until Bad Time Zoo drops.  Man, I can’t believe it’s finally just around the corner.  In celebration of this momentous occasion we will be throwing a massive party at the Fine Line on Feb. 19th with performances from every member of the crew, plus a very special Sims set with Plain Ole Bill, Paper Tiger, and myself on the turntables and MPCs.  This is gonna be so awesome.  Below is the flyer with tons more info.  If you’re able to help spread the word and post it places that would rule. 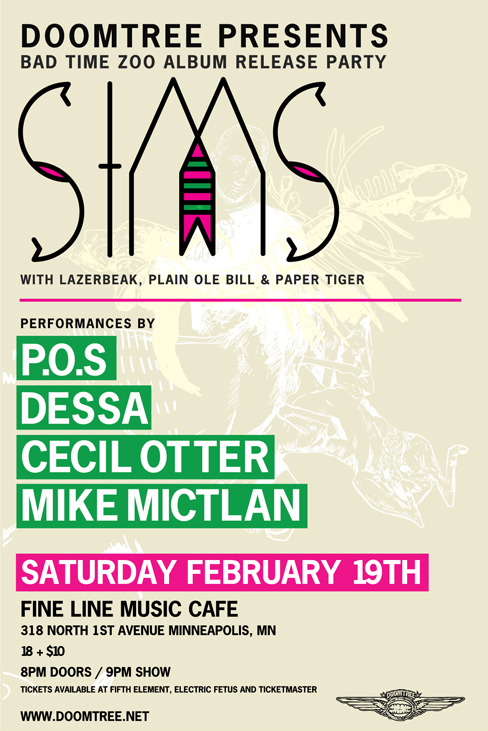 In other show news, this weekend happens to be the crazy Doomtree triple header in the Twin Cities.  I know I mentioned it last week, but it bares repeating now (supposed to be read/sung in a Jack White voice).

FRIDAY 1/21:  Cecil Otter is playing at the Cabooze with Maria Isa, Culture Cry Wolf, and a ton more.

SATURDAY 1/22:  Lazerbeak and the Ensemble of Legendz are playing at the Turf Club with Marijuana Deathsquads (show flyer included below for shameless self promotion) 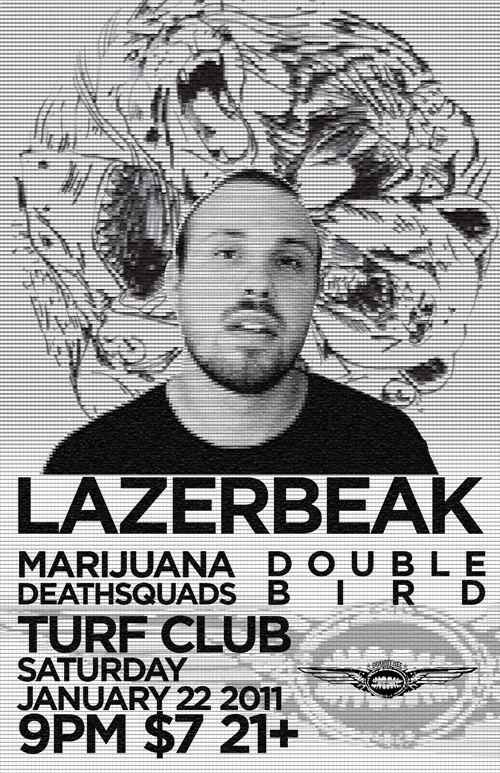 SUNDAY 1/23:  Dessa is doing a very special show debuting new material with her live band at the Cedar Cultural Center with Crescent Moon Is In Big Trouble and Mankwe.

Absolute mayhem.  Please come out and join us if you’re in the area.  On top of all that there are also two ridiculous football games happening on Sunday that will determine who is going to the Superbowl.  So far I have been completely miserable at picking who’s going to win these playoff games, so I’m not gonna even attempt it anymore.  Let’s just say that the Bears better beat the Packers on Sunday, or my wifepiece might just destroy the entire household.  Brittany is possibly the biggest Bears fan ever and she means business.  Fingers crossed.

My friends Jonny and Michelle (wedding photographers extraordinaire) hit me up recently to let me know of an incredibly ambitious new project they’re working on.  It’s called the Fifty Nifty.  They are are attempting to shoot 50 different weddings in 50 weeks in each of the 50 states next year, donating $1,000 from each wedding to an anti human-trafficking organization in Honduras for a total of $50,000 raised.  They’ve put together a really cool video with all the details and contact info, and you’ll probably recognize the background music too.  Check it out below.  I think this is a pretty incredible idea.

OK, that’s about it for now.  Gonna leave you with one excellent Bonus Jam in honor of MLK Day.  This song always puts a smile on my face.  It’s “Happy Birthday” by Stevie Wonder, off of Hotter Than July (one of his best albums ever).  I didn’t know until a few years back that Stevie actually played a huge role in getting the US to make a national holiday honoring King.  He wrote this song in 1981 to help spread the word about the campaign, and two years later Reagan approved the creation of the holiday.  In 1986 we celebrated our first MLK Day here in the states and Wonder headlined a huge concert to celebrate.  I’m sure you spent a little time yesterday thinking about King or listening to his speeches, but take a few minutes today to crank this song extra loud if you can.  I sometimes forget what a powerful and positive affect music can have not only on one person, but on an entire nation.  This is probably one of the greatest examples of that ever.  I hope you have a wonderful week.  See you next Tuesday.